Sadeq Khatami: A Baha’i family with a secret to freedom 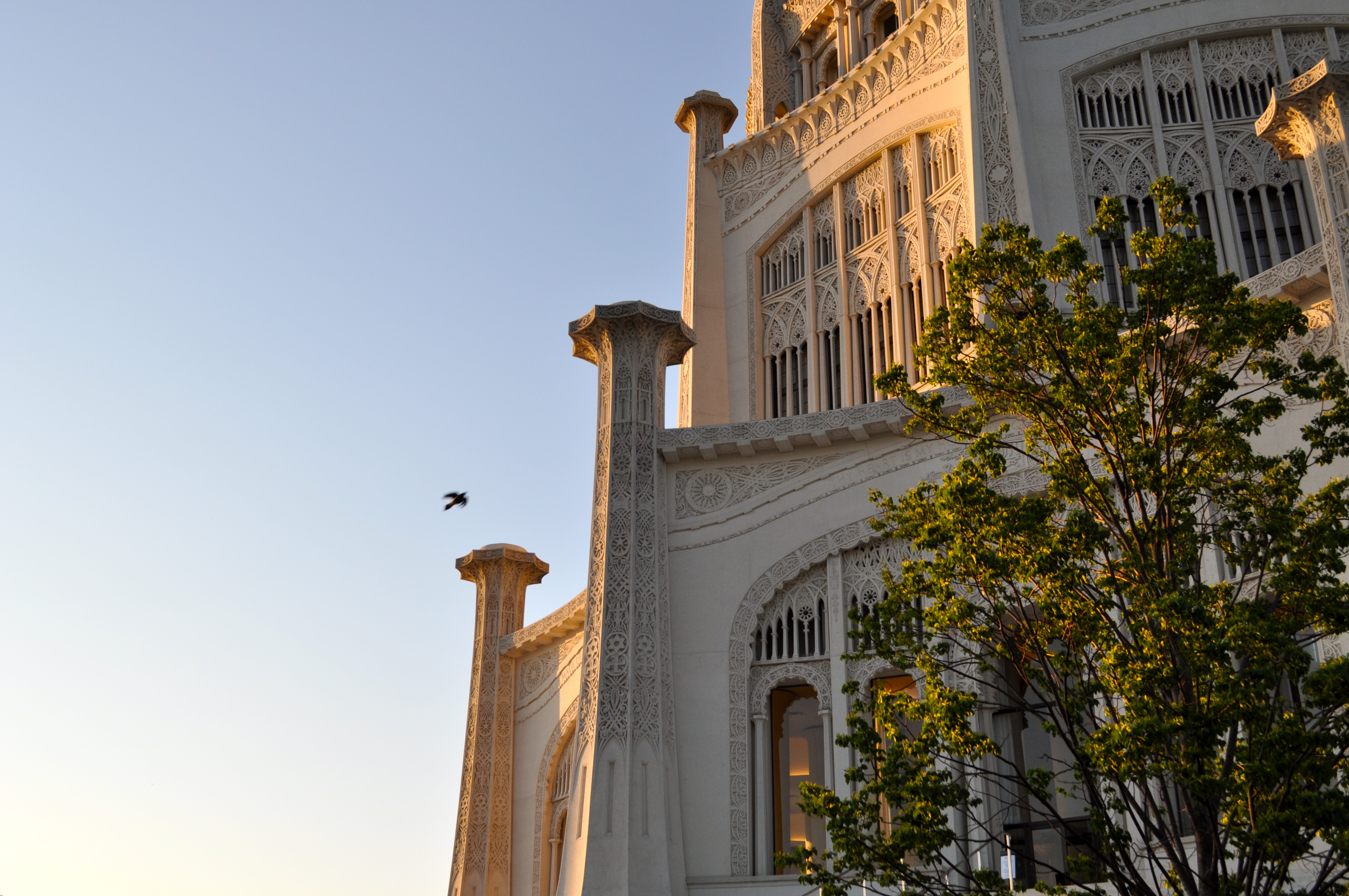 [audio:https://immigrantconnect.medill.northwestern.edu/wp-content/uploads/2011/06/pursue-a-peaceful-path-in-their-own-religion-mp3-version.mp3] Khatami speaks in Farsi about the importance of pursuing peace within one’s religion of choice (his voice has been altered to protect his identity)

â€œEveryone makes their own religion,â€ says Sadeq Khatami, an Iranian refugee who fled his homeland with his wife, Farzaha, and daughter Lale, after the family converted to Bahaâ€™i.

Khatami weaves two stories while he speaks of his quick exit; one that he tells his parents, of being one of the few Iranians to win a green card to the United States. The other story, Khatamiâ€™s reality, is about his search for religious freedom and struggles with negotiating a new culture in the United States.

Out of respect for his wish to keep the second history away from his parents, Khatamiâ€™s name and voice have been altered, as have his wifeâ€™s and childâ€™s.

A gradual conversion from Islam

Both Sadeq and Farzaha grew up in the Islamic faith after the 1979 Iranian Revolution that instituted the current Islamic theocracy. With this political change, conversion from Islam is considered not only a crime against God, but also treason against the State. However, neither husband nor wife grew up with distaste toward religion. Rather each places a high value on spirituality. Religion, not the state that directed it, was a paramount part of theirÂ  life.

The Khatamisâ€™ conversion was a rejection of the stagnation they saw in their countryâ€™s socio-political life, as well as something they â€œfelt in [their] hearts.â€

â€œA lot of the beliefs matched more with todayâ€™s society,â€ says Farzaha, explaining why the religion resonates with her. â€œIn Bahaâ€™i, the world begins with chaos, and comes together to create peace.â€

This vision of the world at large parallels the coupleâ€™s life together as Bahaâ€™is.

Displaying a candor unexpected from someone so soft-spoken, Khatami continues where his wife left off, pinpointing a failing of the current regime in Iran.

â€œAll people in Iran have a problem with religion,â€ Khatami emphasizes. â€œIranians each have their own form of Islam.â€ He continues, explaining that no one follows the Scriptures precisely. Rather, the majority of Iranians quietly disregard state religion, keeping their beliefs to themselves.

These guarded views towards religion, along with the public invisibility of Bahaâ€™i classes and services meant that Khatamiâ€™s conversion went unnoticed. But Khatami worked for the government, and a change in his habits became increasingly evident. Most noticeably, the days on which he fasted no longer corresponded to the lunar calendar of Islam, but to the solar calendar of Bahaâ€™i.

Khatami was taken in for questioning twice. The first time, the interrogators were cordial; in addition to his own state service, his father was a respected public figure. However, the second time, the increasingly confident interrogators began to drop the faÃ§ade of politeness. Then Khatami, under the advice of the local Bahaâ€™i leaders, decided he and his family needed to leave.

Telling only a few friends in the Bahaâ€™i community about their plans to seek asylum in Turkey, the Khatamis crossed the border one evening with only a few suitcases. The crossing was relatively easy. Turkey is a common vacationing spot for Iranians.Â  It was stressful, however, to leave their home, possibly forever.

While Farzahaâ€™s parents also converted to Bahaâ€™i, Khatamiâ€™s parents, who live in another city, were unaware of their sonâ€™s change in religious beliefs. In an effort to disguise his real reason for leaving Iran, Khatami told his father that he was moving to Turkey for better job opportunities.

â€œWe didnâ€™t tell my father because he is older, and has heart problems,â€ says Khatami. His father is a very religious Muslim as well as a government official, and would likely be hurt or even defensive towards his sonâ€™s new beliefs. â€œIt would do more harm than good,â€ Khatami sighs, his eyes tinged with regret that his family will likely never know about something so important to him.

Khatami recounts a conversation he once had with his mother while still in Iran.

â€œI asked my mother one time about conversion,â€ Khataim says, chuckling, as though about to reveal the punch line of a joke. â€œI remember her face; she was shocked. Â She said â€˜people can change religions?!â€™ My own mother didnâ€™t think that people could change religions!â€

Khatami pauses briefly after this anecdote, retreats slightly from his joking manner, and seems to realize the significance of what he has just said.

Several months into their time in Turkey, Khatamiâ€™s father called. He wanted to visit his son in his new home.

â€œWe needed to leave [Turkey] quickly,â€ Khatami emphasizes. The easy border crossing between Turkey and Iran would give away his secret.

Khatami stalled his father for as long as he could while the family hastily applied for a visa. They chose the United States because they had heard it is one of the quickest countries to be admitted as a religious asylum seeker. With a family friend in the Chicago area, their route was set.

Khatami told his father that the family had unexpectedly won a green card lottery, emphasizing his hopes for a new job and educational opportunities in a different place. It was cause for celebration.

In reality, Khatami and his family rejoiced that their secret would not be revealed, and more importantly, that they would have freedom of religion.Â

However, while the Khatamisâ€™ joy at living in a place where being Bahaâ€™i was neither punishable by government order nor discoverable by visiting family members, it was tempered slightly by what they encountered in this new environment.

The labyrinth of food stamps, apartment leases, medical care, English classes, and enrollment in preschool for Lale proved to be a hardship for the family. Simply raising a family in the United States presents a different set of challenges that the Khatamis never conceived of in their homeland.

â€œOne of our greatest fears is for our daughter. We want her to grow up following the Bahaâ€™i faithâ€ says Khatami. As his eyes jet towards Lale , now bouncing on her mothers knee, smiling at the interpreter, he explains how he and his wife are concerned about Laleâ€™s possible exposure to practices, such as drinking and partying, that are socially taboo in Iran.

Khatami has spoken with a Christian co-worker who has faced similar issues in raising his children. Their conversations have been imprinted in Khatamiâ€™s mind and offer hope to a couple unsure of a shifting cultural tide.

The couple also reassures themselves that in America, their daughter can grow up loving her religion, where they can live openly as Bahaâ€™is.

â€œIn Iran, we would have been constantly worried that she [Lale] would speak about her faith at school,â€ Khatami reflects.Â  Here, she will not have to worry about exposing herself and her parents to authorities.

There remains one situation that is proving difficult for the Khatamis: their bi-weekly conversations with Sadeqâ€™s parents. The couple has taught three-year old Lale the Bahaâ€™i greeting, â€œAllah-u-Abha,â€ in addition to the traditional Iranian Muslim greeting of â€œSalaam.â€ Before each conversation, the couple has to prep their toddler to say the correct greeting out of fear that a simple Skype hello will give away a secret they have traveled thousands of miles to hide.

Converting to a different culture

Khatami does not like to dwell on things he cannot change. He is happy with, and slightly bemused by, the new religious freedom that he and his family have in the United States, as well as all of the different religious options that exist here.

In keeping with their new environment, the couple has even tried to introduce Khatamiâ€™s parents to the idea of religious pluralism.

To lay the foundation to, maybe, tell Khatamiâ€™s parents about the familyâ€™s conversion, the couple told his parents that they have friends who are Bahaâ€™i, and that the friends seem very happy with their faith.

It is his only question throughout nine hours of interviews.

The multiplicity of worship groups and organizations is surely overwhelming to someone who spent nearly thirty years living under strict Islamic law. In a slightly tangential fashion during his last interview, Khatmi recites his new rights in America.

[audio:https://immigrantconnect.medill.northwestern.edu/wp-content/uploads/2011/06/freedom-of-religion-mp3-version.mp3] In Farsi, Khatami speaks about freedom of religion in America

â€œIt is the law here that people donâ€™t have a right to interfere or protest against someone else and everyone gets to have religious freedom,â€ he explains with an obvious relish at the wordsâ€™ meaning.

An inscription on the inside of the Bahaâ€™i Temple in Wilmette, a suburb north of Chicago,Â  seems to echo his new constitutional right as well as his hope for his familyâ€™s future. The temple is about an hour away from Khatamiâ€™s home.

â€œAll the prophets of God proclaim the same faith- Consort with the followers of all religions with kindness.â€