My Grandpa Ray, with his wife, Lily, and their five children in San Jose, California in 2003.

â€œGet up there, Jules, go dance with Grandpa, â€œ my mother whispers in my ear as she nudges me toward the makeshift dance floor we had created on our backyard patio. It is my Grandpa Rayâ€™s 80th birthday barbeque, complete with a taco truck, mariachi band, and an array of my distant Mexican relatives.

I glance at my grandpa, watching him move his feet in slow yet deliberate rhythmic steps. He closes his eyes. A smile or smirk emerges. With my grandpa, itâ€™s hard to tell which. His cool and even disposition armor his genuine emotions. As someone who has experienced the multiple disruptions of moving from Guadalajara, Mexico, to San Francisco, California, my grandpa is guarded.

Grandpa Ray first came to the Unites States in 1931 with his parents and little sister when he was just four years old. He left behind an economically devastated Guadalajara, for San Francisco, where his mother had secured a job in her brotherâ€™s bakery.

Two years later, my grandpaâ€™s parents divorced. His father kidnapped my grandpa and his sister, bringing them back to Mexico behind his motherâ€™s back.

I am thirteen years old, sitting on the living room couch next to my grandpa. I ask casually, â€œDid you go to high school here or in Mexico, Grandpa?â€ He turns from the TV to face me. These questions are always answered with the same unrevealing expression, and sometimes, if Iâ€™m lucky, a short, and to the point answer.

This time I am not so lucky. He changes the subject to ask where Iâ€™m going to go to high school, and with that, I know thereâ€™s no use in probing.

My grandpa enjoyed growing up in Guadalajara. However, by the time he was a teenager, he realized he needed a mother in his life, and knew his only future in Mexico was a mediocre job and a struggle to support a family. At the age of fourteen, he jumped on another train to California.

Yet, his motherâ€™s support wasnâ€™t enough. The language and cultural barriers overcame his optimism of American success, and after one year of working, Ray spent his savings on a trip back to Mexico.

I am fifteen years old, sitting at my grandparentsâ€™ dining room table, showing my grandpa a photo album of my summer trip to Mexico. He turns the pages delicately, fixing his gaze on one photo for what seems like forever before turning to look at a new one. I talk quickly and excitedly in Spanish, eager to show off my proficiency. He looks up at me, silent, with no outward encouragement or approval, but with a slight smile and a fixed gaze before he returns to the pictures.

Suddenly, he reaches his hand up to dab the wet corners of his eyes. I flinch, unsure of what to do, but he takes no notice of me, and continues to flip slowly through the pages, with the same small smile across his mouth. Â 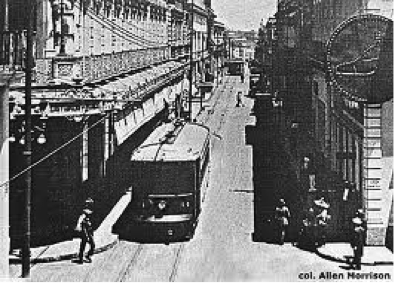 Leaving behind the traditional streets of Guadalajara Mexico did not come easily to Grandpa Ray.

Back in Guadalajara, he had grown so used to the elegance of San Francisco that everything about Mexico seemed rural and destitute. He decided to try again. In 1945, my grandpa returned to the United States, this time feeling stronger with his sister beside him, having made a promise that he would find her a better education and brighter future.

I am a junior in high school. I sit at the same dining room table, waiting eagerly with my pen and paper. An English class assignment to tell your familyâ€™s â€œImmigration Storyâ€ has finally warranted a request to hear the full story.

Â My grandpa sits at the head of the table, his hands folded in front of him. Each sentence comes slowly. He keeps his gaze ahead, but I can feel his eyes on me as I look down to write. He stops after every sentence, waiting expectantly for my next question. No explanation or detail comes freely. But slowly the pieces start to come together.

Upon his third arrival to San Francisco, my grandpa enrolled both himself and his sister in Catholic schools. He studied relentlessly, despite his language difficulties, until he graduated, and eventually founded a housing repair company. He raised five children off that determination.

I casually walk onto the dance floor and half-jokingly attempt to start dancing with my grandpa. To my surprise, he takes my hand and guides me in line with his careful steps. I concentrate on synching our feet, cringing at the â€œawwsâ€ of my older relatives and bracing myself for the snickering of my cousins who would surely call me a suck-up later that evening.

When I turn back to face my grandpa, there are streams of tears running down his cheeks. It catches me so off guard I can barely hold his eye contact. But I keep dancing, holding his hand, and turning slowly to the music.

After a few moments, I bring my eyes back up to his. Although his eyes are still wet, he has regained his composure and looks me right back in the eye, with that half-smile.

Now eighteen years old, I have learned that my grandpa needs time to let down his guard. Although these moments of honesty and emotion come when I least expect it, and are almost immediately hidden beneath his composure, I know that he will eventually open up, one detail and one moment at a time. I savor every one.