Reflections on a metal bench

As I found myself seated on an uncomfortable metal bench, seemingly out of place inside the basement of the Caen War Memorial Museum in France, I wondered to myself why I had never had these realizations before. Just as a short informational video flashed before my eyes detailing the relentless bombings that England endured during World War II, it hit me. 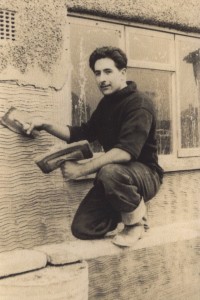 Rebuilding houses after the destruction of World War II was the livelihood of my immigrant grandparents preparing to make the transition to America.

In just seven minutes, the video took me back in time to the place where my grandparents emigrated from. It transported me from my leisurely vacation in France back to England in the 1950s, which I can now presume was the whole point of the film.Â  For once, a museum had served its purpose.

My wheels started turning as I tried to make sense of it all. My endearing and slightly bizarre grandfather, Victor Clough, or Papa as my sisters and I affectionately call him, refuses to get a hearing aid. He barely speaks understandable English now due to his thick British accent and old age that could seriously qualify as a legitimate language barrier. He grew up in the chaos of Nazi destruction.

Now 83, my Papa spends much of his time bronzing his tan, leathery skin that is in alarming contrast to what white hair he has left. Some of the only memories I have of him from childhood involve him climbing around on the roof of the dilapidated farmhouse he purchased in 1961. There is no fix-it project he wonâ€™t attempt in order to keep the house in good shape, no matter how unsafe his family deems it.

When he left Manchester, England, in 1959, the only place he’d ever known, he went with his wife and three small children. He had $400 in his pocket. Not much else. After sailing over the Atlantic Ocean on the Empress of France, the family endured the unimaginable. The final destination was Vancouver, located on the west coast of Canada. They rode by train for what must have seemed forever while my Papa and aunt were miserably ill with the whooping cough.

Upon arrival, they discovered that the job Papa’s friend had promised would be awaiting was nonexistent. Within 18 months, the family had rented seven homes, with my Papa working any odd job that came along. It had become apparent this new life was not going to work out.Â  They set their sights on America in hopes of finding work and a better life.

Sponsored by my Great-Aunt Jean, the family was able to move in with her and her husband until my Papa saved up enough money to buy the house he still loyally lives in to this day. Ohio became their new home, embodying the American dream, but the hardships continued as he worked in maintenance at the local hospital in Cleveland before getting a factory job, working with heavy machinery. 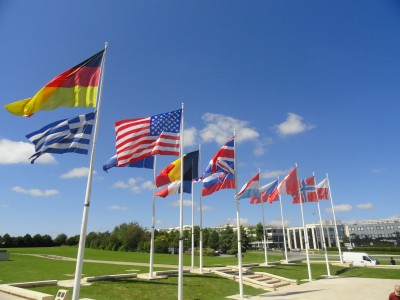 Outside the Caen War Memorial Museum located in Caen, France, everything was reconstructed beautifully, paying tribute to those that died on D-Day during World War II.

Last summer I had the opportunity to visit the home my grandparents had shared in Manchester before immigrating to America. It meant little to me until after my experience on the uncomfortable park bench in Caen.

I had always taken for granted that my grandparents emigrated and had never bothered to learn about their journey to America. It took me 19 years to consider it worthy enough to try to understand what they went through and what possibly could have prompted them to leave all their family and friends behind to start a new life in a foreign land.

My Papa left England so he would be able to give his children opportunities not available in England, something my father took advantage of when he earned a Master’s Degree in Business. The strength it must have taken for my Papa to risk it all for a better life, and for my father to live as the son of an immigrant astounds me. I grew up in a comfortable, suburban setting in Nebraska with relatively few hardships. For Christmas growing up, I received what seemed like unlimited amounts of toys. My aunts and uncles have shared with me how they got fresh fruit under the tree, which was a special and uncommon treat.

If his own grandchildren cannot even grasp his hardships and learn from everything he overcame in attempts to provide a better life for his family, why did he even bother? The revelations that I experienced in Caen made me take a second look at my heritage and made me appreciate how privileged I actually am.

My frail and eccentric Papa is not someone to be disregarded. He is someone to be listened to and valued by the legacies he is leaving in this country. It’s my mission to pass it on.