My grandfather’s poem in the library stacks

Standing among the stacks in the South tower of the Northwestern library, I found the magazine with my grandfather’s poem. Dozens of years of Midstream, a Jewish culture magazine, lay in front of me bound in green hard-cover compilations. I lifted the 1999 collection from the shelf, flipped to the right issue and turned pages of timeless gray type until I reached one that looked familiar: MY FIRST VISIT TO THE HOLOCAUST MUSEUM.

I’d seen the page before. My grandfather first showed me the poem when I was about 13, the same age my older cousins were when he first showed them. We had been visiting my grandparents in Maryland, at the house my dad grew up in. Grandpa had taken me aside and slowly, so as to not wrinkle it, tugged a copy out of a protective manila envelope.

The poem’s bitterness had surprised me. Grandpa was a serious man, the type of grandfather who would later bring me into his study and command, in his methodical Serbian accent: “Tell me about yourself.” But he was also the grandfather who had swung me back and forth between his legs every visit, the one who built a wooden firehouse for my toy trucks. Stone bunnies had a way of appearing in his backyard, and he even brought us one for ours.

In earlier years, Grandpa had read me some of his other poems. They were different, lighter. One of his favorites described “the comely lass in my electrochemistry class,” my grandmother.

In the poem, the narrator sounded angrier than the grandfather I knew. 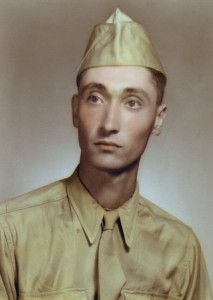 “The Lord spoke to me on the subway as I journeyed to the four dimensions of death,” the poem begins. “The place of His years of awe memorialized/ The exhibit of the transcendent mystery of His indifference.”

Grandma and Grandpa had two sets of dishes, one for meat and one for milk, and on the Friday nights of our visits, Grandpa always recited the long version of the blessing over the wine. I had assumed these customs meant Grandpa believed in God.

In the poem, though, my grandfather chose the device of a divine monologue, it’s clear any faith he had was shaken irreparably by the slaughter in the world he’d left behind. “And I shall suffer the gold teeth to be knocked out of your grandmother’s body. / And I shall suffer her body to be burnt and her ashes discarded as garbage,’ said the Lord.”

Even back before his memory started going, my grandfather never talked much with me about what his family members went through after he left Yugoslavia. He did talk, however, about his life before he left. When I was about 12, Grandpa took me out for lunch in my hometown of Brookline, Mass., and spoke of his life at my age. He had grown up in Yugoslavia, but after being scapegoated for an assassination, the Jewish community had felt increasingly unwelcome. Grandpa’s family had moved to Hungary for a year, starting a temporary life in place of one that had been slowly stripped from them.

There are many questions I wish I’d asked back then, questions I can’t expect answers to them anymore when we visit my grandparents, at least not from Grandpa. I’d ask my grandfather more about what he left behind, his first experiences in war and then in peace for the country I’d later feel fully a part of. I’d want to hear his first impressions of the girl from chemistry class. But at 12, I sat and listened, not knowing, of course, that Grandpa would soon get sick with a cruel disease that attacks his memory every day.

I’m part of the last generation in my family who will remember Grandpa, the only immigrant among my grandparents, before he got sick. To learn more about my grandfather’s immigration story, I now talk with other relatives. As his poem suggests, the stories about what happened in the Europe that Grandpa left behind have few happy endings. Stories from his own life, though, especially after he moved to the U.S., are much easier to hear. I especially like the one about Grandma approaching him for the first time in a Columbia University library.

Two generations later, in a library at a school halfway across the country, I pressed a thin green volume into a scanner to save my grandfather’s poem. In the world he left behind, some people had hoped this type of poem would never be published. Now, as I walked back to the shelf in the Jewish literature section of my university library, I knew those people had lost.