A tennis lesson in survival jobs

[audio:https://immigrantconnect.medill.northwestern.edu/wp-content/uploads/2011/11/aboutyouaudio.mp3] Listen to Jake tell his story – A tennis lesson in survival jobs
For Sam Prasert, â€œdeuceâ€ was a two-syllable word. 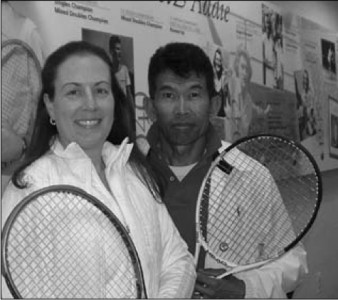 Whenever the points lined up at 40-40, the silent e was not so silent for him, yielding a raucous â€œdoo-seeâ€ from the other side of the tennis court.

Though he had come to the U.S. more than 20 years before, Sam still had a strong Thai accent that, despite his passionate teaching, sometimes made his competitive yelling hard to take seriously. At 50 years old, it was likely a permanent fixture in his English. He had defined crowâ€™s feet creeping from the sides of his eyes. They were deep smile lines, ingrained by repetition.

The characteristic summer humidity of Washington, D.C., made it nearly impossible to focus on the game. So did the fact that, as an eighth grader, I wasnâ€™t the one paying for the lessons. My commitment was waning. I wanted the game to end.

I hurriedly served, hard, straight down the center. Smashing the ball back with a forehand, Sam yelled, â€œReturn to sender!â€ I managed to tap it back over the net with a half-hearted lob. I knew what was coming.

Sam took his time with the overhead, easily crushing it into the opposite corner and ending the game. I looked at him weakly for a moment.Â  â€œNo muh-say!â€ he yelled, affably mocking my lack of hustle.

I saw my mother ambling over from the car to pick me up. Desperate for air-conditioned comfort, I quietly shuffled in her general direction.

My mother proposed a few possibilities for when the next lesson would be, and Sam shot down most of them. He said he was working. But the courts werenâ€™t lit after dark â€“ where was he working at night that kept him so busy?

He explained that heâ€™d recently picked up long hours of work at the Home Depot, and as a wedding photographer. â€œI didnâ€™t realize you had a background in photography!â€ my mother chirped, head cocked to the side.

I had been his student for almost a year and we had established a good rapport, but he stumbled over his words as he started to tell his story. It was unrehearsed. Though he had undoubtedly described his background over his years in the U.S., it was clear that his discomfort lingered. As he realized my mother and I were deeply interested, he began to open up, his words flowing with more emotion and certainty.

In Thailand, he was a lawyer and a professor. He had argued high-profile cases, and had taught for years at a prestigious university. When he came to the U.S., his degree and credentials didnâ€™t transfer. With limited English, Sam was forced to abandon his legal career and work survival jobs â€“ often a few at a time â€“ and finally settled on teaching tennis.

Before that conversation, I had seen Sam rather one-dimensionally, as a humble yet delightfully mischievous teacher. The man whoâ€™d go on to guide me through five years of tennis had suddenly taken on deeper dimensions.

Our lessons sputtered out as I finished high school. For the first few years of college breaks, I would swing by the courts where he taught so we could catch up. As with so many other relationships, we fell out of touch.

Thereâ€™s a lot I never learned about Sam; how he adjusted to American life, if he missed Thailand, his reasons for coming to the U.S. in the first place; even his Thai name.

He probably doesnâ€™t know that my talks with him were my some of my first conversations about immigration; that, as a tennis instructor, he gave me my first lesson on the gravity of uprooting oneâ€™s life â€“ giving up an intellectualâ€™s career and a first language â€“ for a new one in the U.S.