Higher education a blessing and curse to Filipino community 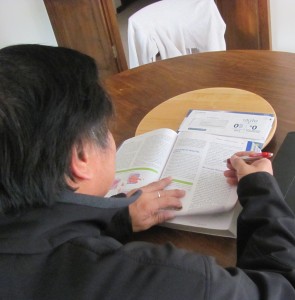 Â [A version of this story was published in Pinoy: The Filipino American Newsmagazine. Read it here.]

When Roger Sanchez, 60, a recent Filipino immigrant and phlebotomist learned that his wife had suffered a stroke last year, he immediately went into survival mode for the sake of his family. His wife, 50, worked for the Filipino consulate in Chicago, but with only one income in the family after her stroke, Sanchez did the only thing he thought was best. He entered the field of nursing.

â€œI wanted to go to school for employment purposes. I decided to get my LPN certification because the health care industry is not suffering, even in this economy,â€ Sanchez says. He is the oldest person in his class, but to him, any embarrassment is a small price to pay for the security of his family.

To 22-year-old Veronica, life overseas offers far more independence, but with a caveat.

Roger Sanchez displays his and his daughter Veronica's nursing materials side by side. (Photo credit: Paris West)

â€œIâ€™m more independent here and I feel like I can do more thingsâ€¦but my father really pushed me to do nursing,â€ she says. â€œHe told me to finish nursing first and be stable and then I can do whatever I want. He said that my interests were okay, but I needed a more stable job.â€

Veronica is approaching her new career as a way to gain stability before pursuing her personal passions. The disparity between her rationale and her fatherâ€™s reasons highlights a cultural and generational schism that is emerging in the Filipino community. As opportunities for higher education and career advancement arise, many young Filipinos find themselves more able than ever before to distance themselves not just from the previous generation, but from the ethnic community as a whole.

High expectations push migration out of the community

Jay Catanus, 27, has also borne witness to the growing disconnect between first and second-generation Filipino immigrants. Catanus, a second-generation immigrant and pastor of the Northwest Filipino Baptist Church in Chicago, moved to the United States from Canada after his father decided to start a congregation. After first pursuing a career in law, he found his true calling in theology, attending divinity school at University of Trinity College in Toronto. Though Catanus ended up following in the career path of his father, who was educated both in the Philippines and the United States, he emphasizes that while his decision to follow in his fatherâ€™s footsteps is typical of many Filipinos, his career choice was not.

â€œEducation is the ticket out of the Philippines,â€ said Catanus. â€œMost first generation Filipinos come here for an education, and expect their children to pursue a higher education as well.â€

However, says Catanus, most first generation immigrants struggle to gain a financial foothold once in the United States, facing enormous monetary challenges when sending their children to college.

â€œA lot of [Filipinos] stick to their parentsâ€™ career path,â€ says Catanus, â€œBut [since] most of the challenges that Filipinos face when going to college are financial, thereâ€™s definitely pressure to find a job that will pay off those bills…Most Filipinos try to make the most of their earning potential, so youâ€™ll find a lot of doctors, nurses and MBAs.â€

Somewhat ironically, it is this pressure to choose high-paying careers to repay their student loans that creates a fast ticket out of the community. Catanus points out a growing trend in Filipino communities. Most Filipino organizations and community centers are run by senior citizens or first generation immigrants, with the second generation choosing to relocate outside of the community and drift from their roots.

â€œAs a Filipino in the church, I can tell that a lot of people donâ€™t feel attached to the â€˜Filipinoâ€™ label, and itâ€™s creating a problem that many people donâ€™t see,â€ Catanus says. â€œItâ€™s hard to maintain a sense of community when there are so many opportunities to leave.â€

The drift may not be wholly intentional, according to Northwestern University Ph.D. candidate James Zarsadiaz, who was born to first generation immigrants in Los Angeles, in an â€œenclaveâ€ community with many Filipino families living in close proximity. Zarsadiaz asserts that the pursuit of higher education is simply a natural tendency for the Filipino community, a pursuit that naturally lends itself to a distancing from the community.

Once a second-generation child goes on to pursue a higher education, says Zarsadiaz, there remains little incentive to return to these enclaves, especially if they pursue a high-paying career. To Zarsadiaz, the community often falls into two distinct categories.

â€œWith the first generation, you have to deal with culture barriers, assimilation and racism. Thereâ€™s a need for an enclave.â€ he says. â€œBut with the second generation, if you can pursue a higher education, you have more time and money, more disposable incomeâ€¦if you can afford to live somewhere more affluent, youâ€™re probably going to be less connected to the community.â€

The makings of an invisible minority

Though growing opportunities for higher education amongst the second generation is certainly beneficial individually, the migration from the community causes problems on a larger scale.

Both Catanus and Zarsadiaz agree that the distancing is probably most troublesome when it comes to political representation. Filipinos, both observe, are rarely represented in politics and thus face extreme difficulty in having their interests expressed in political and societal contexts.

â€œFilipinos are the second largest Asian group in the country, after Chinese,â€ says Zarsadiaz, â€œBut there is a stereotype within how people perceive Asian-Americans that makes Filipinos invisible minorities.â€

Filipinos, Zarsadiaz says, are often lumped in with other Asian identities when it comes to political issues, noting affirmative action as a particularly tricky problem. The Filipino community, he advocates, must be looked at as its own community with its own issues that diverge from those of other Asian communities.

The solution to confronting these issues may lie in mobilizing the community, in particular, the younger generation, who are perhaps more likely to have the education and resources available to help their community.

Catanus, however, is not so optimistic. â€œThe detachment that the second generation feels is one of the major reasons for political absence of Filipino voices,â€ says Catanus. â€œThere isnâ€™t a base for mobilizing the community…for the second generation to start getting involved, there needs to be some sort of huge wake-up call.â€

Tina Shauf, the youth coordinator at the Filipino Community Center (FCC) in San Francisco, who was born in the Philippines but raised in America, received her wakeup call shortly after she enrolled as a undergraduate computer science major at UC Berkeley. Shauf realized that her passion lay not in computer science, but in social policy. When the time came, Shauf found that her interests in social issues and youth work lent itself perfectly to the Filipino community. At the FCC, Shauf now works with both first and second-generation Filipino youth to provide development programs and support them as they navigate the American education system.

â€œI grew up in a community of mostly Latinos and African-Americans,â€ she says. â€œGrowing up, I always had an underlying sense of being Filipino but I wanted to know moreâ€¦I think now I understand the issues of the community in a deeper way.â€

As someone who works closely with Filipino youth, Shauf believes that the best way to ensure that second generation immigrants make an effort to lessen the growing distance in the community is by educating them on the communityâ€™s needs.

â€œItâ€™s our responsibility to know whatâ€™s going on, and now, with all the social movements that are happening in our country, a lot is starting to affect the middle class,â€ she says. â€œNow is a really important time to have these conversations, to see whatâ€™s going on in the communities you may have left behind.â€

For first generation immigrant and recent American citizen Kevin Cervantes, 20, his wake up call arrived upon coming to school in Chicago. Growing up in the mostly Caucasian Chicago suburb of Palatine, there were not many Filipino faces around. â€œAll my friends were white, so they influenced me to be more American, but my mother always said to me, â€˜Donâ€™t forget you are a Filipino.â€™â€

Cervantes was finally able to bridge the gap between his Filipino culture and his American upbringing during his time at Loyola University Chicago, where he is now a sophomore. Cervantes isÂ a member of KAPWA, Loyolaâ€™s Filipino student association, and is a brother of Sigma Alpha Epsilon.

â€œKAPWA is really big on cultural traditions,â€ says Cervantes. â€œKAPWA has really helped me get in touch with my Filipino side, but I also really like my frat, so I guess you can I say I have the best of both worlds.â€

Cervantes has also managed to stay connected with his parents and his community by choosing a career path approved by both. Growing up in a household with a nurse mother and a pharmacist father, Cervantes has always been around the medical field, and it has been expected of him to follow in his parentsâ€™ footsteps. Â â€œMy mother always said, â€˜Kevin, you have to be a doctor,â€™ so Iâ€™m pre-med now, but I actually like it,â€ he says. Cervantes is determined, he insists, to remain connected with his culture throughout his life.

While pressuring the second generation to find high-paying jobs might be the best option for a familyâ€™s finances, it is the cause for some discontent amongst a younger generation that has grown up in a household that stresses the importance of family while living in an American society that emphasizes personal integrity and individuality.

â€œThe pressure is for their own benefit, but they determine their own future,â€ affirms Roger Sanchez, â€œEvery generation is different, but we need to be open and communicate well. To understand each other, they need to know how important family is.â€

Indeed, perhaps the first step needed towards unifying the community and closing the distance between the younger and older generation is to stress the importance of family. Says Veronica, â€œIâ€™m not that involved in the community anymoreâ€¦but itâ€™s my turn to help my family. When I have a nice job and Iâ€™m stable, I know Iâ€™ll take care of themâ€”and I think other Filipinos feel the same way.â€