The exam room buzzed with nervous concentration as young medical students prepared to take one of their certification exams. Jeans, sweatpants and t-shirts, it seemed to Halina Kalinowska, were the test day uniform.

But Kalinowska was a doctor. And doctors did not dress sloppily for exams. She was determined to be elegant. And so, with carefully applied makeup, a three-piece suit and a fur coat, 45-year-old Kalinowska stepped into the room. Bright lights spotlighted rows of large tables, each equipped with two question booklets and two chairs. With insular focus, Kalinowska took her seat and began the test she would retake multiple times in the coming years.

With 17 years of experience as a physician at one of Polandâ€™s largest hospitals, Kalinowska was starting from the beginning again. In order to be licensed to practice her passion, medicine, in the United States, the new immigrant had to conquer English, an expensive set of tests and the multiple choice format , all while raising a family.

Degrees and qualifications canâ€™t be packed into suitcases and even practiced professionals like Kalinowska must undergo the process of transferring their degree and proving themselves through a new countryâ€™s system.

So, in 1996, Kalinowska settled into her basement and began to study.

[audio:https://immigrantconnect.medill.northwestern.edu/wp-content/uploads/2011/12/Halina-1-Rules-of-Studying.mp3]Listen to Kalinowska and her daughter Ewa, 33, recall their “rules of studying.”

Those hours culminated in a single blue slip of paper which arrived by mail weeks after the exam. There were three boxes on the sheet, and only one was labelled pass. That box was not checked.

The knowledge was there. Her preparation was exhaustive and meticulous. Yet, because of the language barrier, Kalinowska had left 100 questions blank. She simply had no time to read them over.

Many immigrants come into the United States with skills and degrees from home, but having foreign credentials is just one leg of the immigrantâ€™s journey. Getting them recognized is an entirely different and arcane story. Nostrification is the process of granting recognition to a foreign education. As newcomers unpack, some are unaware their degrees can count for something. Others abandon them in the whirlwind of trying to establish and support a family. Even the processâ€™s name, nostrification, is one few have heard of.

Thatâ€™s where educational consultants like Alina Mikolajczyk come in. 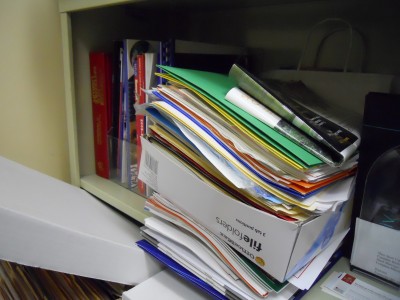 Files upon files await the next step in Mikolajczyk's office.

Down one of corridors of 4738 N. Harlem Ave. in Harwood Heights, one of Chicagoâ€™s western suburbs, Mikolajczykâ€™s office is steeped in a warm glow. There is a dancing flower trinket to her left, and files decorate the office like leaves on an autumn lawn. Each file represents the transfer process of a new immigrantâ€™s ambitions. One day, some files may be topped by Thank You cards that smile at Mikolajczyk from a corkboard above her file cabinets.

In 2006, Mikolajczyk started Educational Communications Consulting, Inc., a company that helps people through the process of nostrification. Mikolajczyk helps immigrants realize that while transferring their baggage, families and lives overseas, they can also bring their degrees.

Often, immigrants are told their degrees will not count and they must start from zero. After working in National Louis Universityâ€™s international office for 12 years, Mikolajczyk decided to help newcomers realize this was not true.

â€œI found out about all those myths, all those misleading statements and I wanted to help people go through all those obstacles,â€ she says.

In fact, the process can be straightforward, though many steps are involved. Usually, the entire process takes about a month, costs $400 to $500 and ultimately allows the applicant to pursue employment, further education or professional licensure. Doctors, veterinarians, dentists and architects must complete it and a series of additional steps to be licensed.

First, the applicant obtains an original transcript and a formal letter explaining the differences in the educational system from their alma mater. Typically, it takes a few weeks for the requestor to order the transcript, or complete an â€˜indexâ€™ as itâ€™s called in Poland, and have it sent to Mikolajczyk.

The diploma, transcript, and letter are then professionally translated, either by Mikolajczyk or a translation service. With these documents, Mikolajczyk fills out the necessary paperwork and applications. She then evaluates and forwards the documents to a nostrification agency, based on which agency she believes will convert the degree most favorably.

The agency converts whatever education the applicant has completedâ€“be it a full or partial foreign degreeâ€“into American credit hours. The conversion rates vary for each major but in general, 120 hours are the equivalent of an American bachelorâ€™s degree.

Should the evaluation come back showing there are insufficient credit hours for a degree, an applicant may have to complete additional courses in the U.S. to finish the degree.

If itâ€™s not one thing, itâ€™s another; usually language

For Michalina Maliszewska, 27, it was little more than a hassle. She never completed her five-year journalism program in Poland, but had more than enough credit hours to have a fully recognized bachelorâ€™s degree in the United States.

â€œI already had 140 credit hours which is enough for a B.A., so I figured I might as well go for the masterâ€™s,â€ she says.

The process was over in three weeks. Maliszewska is currently pursuing her second masterâ€™s degree in human resources at Northeastern Illinois University.

Anne Szpindor, 57, is an allergist with two practices in the Chicago area and an active leader in the Polish American community. Her parents were well-educated in Poland but were never able to continue their professions in America. Their experience with underemployment made Szpindor value her education, and her parents always pushed her to achieve academically.

â€œ[My father] worked various jobs, all kinds, just whatever he could get. He even ended up 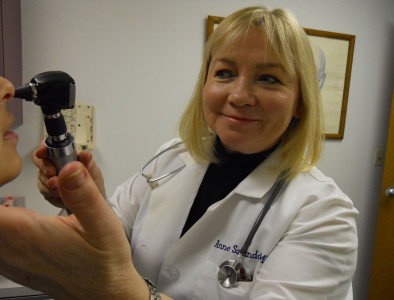 painting – like a house painter,â€ she says. â€œIt’s a very distressing thing to talk about in our family â€“ how our parents suffered.â€

Her father had been an attorney and, after facing pressure from the Communist regime in Poland, moved the family to Chicago.

[audio:https://immigrantconnect.medill.northwestern.edu/wp-content/uploads/2011/12/Szpindor-Quote-Parents-Distress.mp3]Listen to Szpindor recount her parents’ struggles to adjust in America.

â€œItâ€™s always the language. Itâ€™s just like, [if] youâ€™re a professor but you canâ€™t lecture that well, thereâ€™s always that obstacle,â€ Szpindor says. â€œItâ€™s just more difficult to go through all those hurdles. It takes extra effort. A lot of people are deterred by that.â€

Language was the same reason Kalinowska did not have time to complete her exam. And although it took a total of five years for her to pass each step, it never deterred her. She was fluent in Russian and French and studied Latin, but when she tackled her physiology textbook, she had to tackle it in English.

â€œI was learning â€˜I am, you are, he is, she is, etc.â€™ at class and picking up some vocabulary, just lay-person vocabulary. Add medical vocabulary and connecting everythingâ€¦,â€ she trails off, shaking her head.

It took Kalinowska three months to read through that textbook. Between sending her kids to high school, swimming lessons, taekwondo and adjusting to their new home, she never stopped being a doctor.

If they can do it, I can do it

â€œWhen I decided to start taking exams, I suppressed this feeling that I was already working [in Poland]. I realize that now is a different task,â€ she says. â€œI always feel like a doctor, that I knew a lot, I just have to pass this stupid test.â€

The family went from two stable incomes in Poland to living off the fatherâ€™s $6 to $7 hourly salary. Becoming board certified is expensive. Each exam costs about $1000, and on top of that, the textbooks are costly.

[audio:https://immigrantconnect.medill.northwestern.edu/wp-content/uploads/2011/12/Halina-2-Waiting-for-Results.mp3]Listen to Kalinowska recall the agony of waiting for her test results.

But the move to America was worth it, if only so that their two â€œlittle troublemakersâ€ could be educated here. The elder troublemaker, Ewa, 33, just started her medical residency in Chicago, inspired by her motherâ€™s determination. 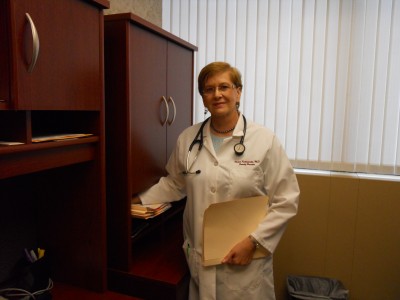 Dr. Kalinowska beams from her office, wearing the pearl necklace and earrings she made in her spare time.

Last February, Halina Kalinowska opened her own practice in Chicago, where, after 15 years, she is back to doing the job she left in Poland.

Sitting at the dark wood desk of her office, wearing a chic pearl necklace she beaded herself, Kalinowska looks genuinely content. The transferral process took time and energy, but for her, it was worth it. When asked if she would do it all again, she laughs: â€œBut I already did do it all again. A third time? Sure! If I live long enough, definitely.â€