For Chicagoâ€™s undocumented, opening up can pay off

Daniel was tired of feeling alone. At 22, he ached to meet other undocumented Americans, and in April, 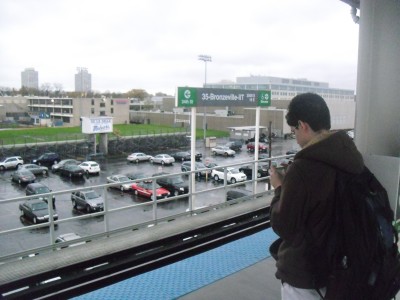 Daniel on the el platform overlooking the IIT campus.

he headed to a â€œShout It Outâ€ event in Chicago for students like him.

As he walked in, Daniel told himself he wouldnâ€™t reveal the school he attended or other details about himself. He had kept his immigration status a secret from his closest friends, but in the roomful of strangers, he changed his mind.

â€œI ended up saying everything,â€ says Daniel, who asked that his last name not be used in this story.

Daniel, whose family moved from Colombia to Florida when he was seven, is one of a growing number of area college students choosing to embrace a status they long kept hidden. During and after debate on the Illinois DREAM Act, student groups pushed undocumented immigrants to declare their status, arguing that publicly demonstrating their numbers would yield new political muscle.

But as Daniel and other students can attest, embracing oneâ€™s immigration status can do more than just support a political movement. It can help make college more affordable, too.

Shared status has its benefits – information on pipelines

When undocumented students share their status with trusted counselors, the counselors may be able to connect them with additional scholarships and protect them from accepting aid that could later make legalization more difficult.

The decision of whether or not to declare oneâ€™s immigration status, and to whom, is likely one more students are facing each year. Illegal immigration is slowing, but more students brought into the U.S. as children are considering college as a possibility, says Hugo Teruel, Interim Director of Latin American Recruitment and Educational Services, a program at the University of Illinois- Chicago.

â€œClearly with all the attention and progress, the number of undocumented students is going up,â€ Teruel says. â€œMore students are realizing that they can go to college, that there is money for them, [and are] feeling that there is more support.â€

That seems especially true in states like Illinois, which lets undocumented residents pay in-state tuition and is considered by immigrant advocates to be relatively immigrant-friendly. At UIC, which has a total enrollment of approximately 27,000 students, school statistics suggest four percent of students are undocumented. Teruel suspects the real percentage is higher because some students may be hesitant to declare their status to school officials.

At Illinois Institute of Technology in Chicago, where Daniel is pursuing his bachelorâ€™s degree in Materials Science and Engineering, he assumed he had undocumented peers. But even in a student body of nearly 8,000 students, he knew of no one who shared his status until this spring.

Now, after talking with admissions staff members, he says 55 undocumented students enrolled at IIT this semester alone. Â One of his first undocumented friends at IIT, 23-year-old Maria, is helping Daniel launch a new club called Undocumented Students and Allies. The two hope the club will help others realize theyâ€™re not aloneâ€”and that resources exist to help them.

Tapping on the door of resources

Resource assistance is a message Maria hopes will reach high school students, too. Maria, who moved to Chicago from Mexico when she was 8, qualified for several scholarships at out-of-state universities, but she couldnâ€™t claim them without a social security number.

Figuring out how to pay for college was a frustrating process for her, she recalls.

â€œThereâ€™s a point where everyoneâ€™s applying for FAFSA [federal financial aid] and everything and youâ€™re the only one left alone, like, â€˜What do I do?â€ says Maria, who also asked that her last name not be used.

Some undocumented students, like Maria, seek advice from high school advisors and college admissions counselors. Sometimes that doesnâ€™t help. Maria says some advisors told her there were no funds available to pay for college. Others told her pursuing a degree would be a waste of time and money, since she would be unable to find good jobs after graduation without legal residency.

So as Daniel and Maria urge their college peers to talk openly with advisors, theyâ€™re also planning to work with advisors at both the college and high school level to share information about the resources that exist for undocumented students.

When applying to transfer to a four-year university from Harold Washington College, Maria assumed she should be focusing on public institutions, where tuitions are much lower than private universities. After extensive research, Maria realized private schools like IIT also had funds she could qualify for.

â€œThereâ€™s a misconception that public institutions are [always] the cheapest way for undocumented students to go about getting a college education,â€ she says.

Undocumented students must be aware of the differences between private and public sources of financial aid not only to avoid missing out on receiving the most financial assistance possible, but also because mistaking the two could have greater consequences in the future.

The risks of going away the wrong scholarships

â€œYou have to be very aware of the scholarships you are getting,â€ Daniel says. â€œAnything that is funded by taxpayers becomes problematic. If you accept them and you try to legalize your status, you have to state that you got these fund while you were undocumented, [which] can affect your chances of ever becoming legalized.â€

â€œThe city colleges make it known that these particular scholarships are available to undocumented students,â€ says Lugo. â€œSome of these guys are very good students, and weâ€™re losing out as a country if weâ€™re not tapping into that.â€

Still Lugo, who advises Daleyâ€™s Latin American Student Organization, urges students to share their status only with advisors they feel they can confide in.

â€œThe decision to open up is a very difficult one, because obviously thereâ€™s fear of â€˜whoâ€™s going to find out that Iâ€™m here illegally?â€™â€ he says. â€œPlease make sure that you trust the person enough to relay this information.â€

Teruel, the UIC counselor, sees the scholarship as an important step forward, and he hopes more are yet to come.

â€œIf we have human potential for students to be all they can be, why are we going to put roadblocks in their way?â€ he says. â€œIf you have a number one student in their high school, letâ€™s have them go to college.â€