Sandy Younan does not like to waste time. She doesnâ€™t have a lot of it. 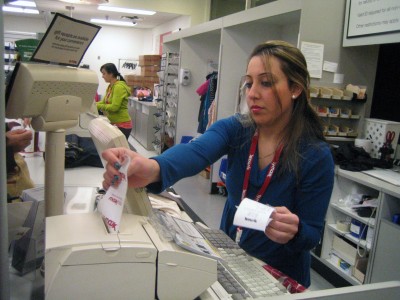 She answers my questions methodically, as if filling out a problem set, at a table in the crowded Panera Bread she frequents to do homework or study for her classes at Oakton Community College in Skokie.

Younan, an Iraqi refugee, had to give up her life in Baghdad when, at 20 years old, she received an anonymous threatening letter causing her to flee to Syria with her mother. Once the baby of the family, Younan was obligated to take responsibility for herself and her mother when she was resettled in the United States in December 2008.

â€œThe biggest change is the responsibility,â€ Younan says. â€œBefore I used to ask everybody, I canâ€™t do anything on my own. But here, Iâ€™m the person whoâ€™s giving the help for somebody else. Of course sometimes I struggle. You canâ€™t do everything by yourself unless you get some help. But the major thing, Iâ€™m doing everything on myself.â€

[audio:https://immigrantconnect.medill.northwestern.edu/wp-content/uploads/2011/12/sandyb4after1.mp3] Younan is very organized. Here’s how she says she does, and why she has to.

Now 24 years old, she finds herself running around constantly, balancing a job at TJ Maxx, school and family responsibilities. But Younan says she thrives in this hectic environment, and is determined to finish her degree as soon as possible, having lost â€œfour to five yearsâ€ of her life due to her relocation to Syria and then to the United States.

Younan attended university in Baghdad, specializing in chemical engineering. Her first year at university was routine, she says, but by the second year she began to feel unsafe.

â€œIn Iraq I donâ€™t trust anyoneâ€”only my old friends, not the friends that I met a year ago,â€ Younan says. â€œFor example, when I went to university, I donâ€™t trust all these people. Thereâ€™s always action and reaction, so if you do something, you ignore somebody, you never know who this person is, what they can do.â€

Because of the stories she heard about bombings and accidents happening to students, Younan says she decided to stay home the first half of her second school year because she was afraid. She decided to return for the second half of the year when a friend told her she could make up the work she had missed and complete her second year on time.

Determined not to lose a year in school if she had an option, she returned only to be faced with a series of suspicious incidents culminating in her secret flight from Baghdad at 6 a.m., two weeks after receiving a threatening letter and a warning from a classmate that she was in danger.

The letter she received was typed and anonymous, and contained personal information about her that no one at her university would know, because she says she had no close friends at school.

â€œThe message is he knows me, that Iâ€™m studying chemical engineering, that Iâ€™m a second year, he sees me every single dayâ€ Younan says. â€œAnd he was like, â€˜I was trying to get to you, but I couldnâ€™t because all the time you were surrounded with people.â€™â€ 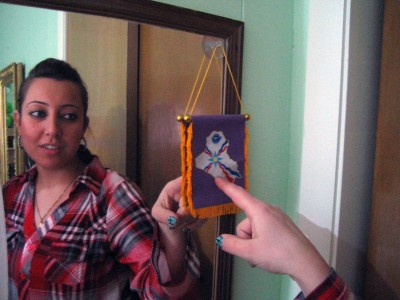 Younan points to a flag with the map of Iraq on it that features the Assyrian flag, representing her country and nationality.

Younan says she doesnâ€™t know exactly why she was targeted, but thinks it may have had something to do with her ethnicity, as an Assyrian, a Christian minority in Iraq, and that she was the only Christian in her university department.

Starting over: Syria and migration to the United States

Younan decided it was time to leave Iraq because she no longer felt safe. Her mother had been encouraging her to leave since the strange incidents at her university began, but Younan was determined to finish school.

â€œFirst she was pushing me, but I was like, â€˜Mom, I only have a few exams, let me just finish them, and then we can leave and if the next year will be better, I can go back and finish my third year,â€™â€ Younan recalls. â€œAnd she said okay, because she knows meâ€”Iâ€™m passionate, I just want to finish my school. I want to get my degree.â€

Arriving in Syria after a 27-hour car ride offered the first indications of the difficulties Younan would face as a 20-year-old refugee starting over in a new country. She went to Syria with her mother, leaving her older brother behind in Iraq. Her father had passed away earlier that year and the rest of her family, including her sister and aunts and uncles, were in America.

Her mother was out of work because of surgery on her hand, so Younan worked full time to support the two of them, while taking her mother to doctor appointments for the high blood pressure and cholesterol she developed due to stress over her childrenâ€™s safety in Iraq.

[audio:https://immigrantconnect.medill.northwestern.edu/wp-content/uploads/2011/12/sandygiveup.mp3] Younan realizes she’s made sacrifices, not she regrets

â€œI had to take care of her,â€ Younan says. â€œWhile she could do that, but she wasnâ€™t that tough, she didnâ€™t have that strength. But me, I was holding myself and holding my mom, because I saw her, she changed. Sheâ€™s not that energetic anymore.â€

After spending a year and a half in Syria, Younan heard about the American refugee resettlement program, and

Younan left much behind in Iraq. Not this teddy bear given to her by her uncle. It's perched on her dresser with photos of her niece and cousin.

submitted an application. In her interview, she said she wouldnâ€™t leave without her mother, because they no longer had any close family in the Middle East. Her application was approved and Younan and her mother moved to Chicago in 2008.

Younan was observing many changes in herself. She had become less emotional, letting the practical side of her personality dominate her almost entirely. She had also learned to depend on herself, which caused her to grow up more quickly than other people her age.

[audio:https://immigrantconnect.medill.northwestern.edu/wp-content/uploads/2011/12/sandyspoiled.mp3] Younan says if there’s one thing she’s not at this point; it’s spoiled

â€œIâ€™m stronger than before,â€ Younan says. â€œIâ€™m independent now, because of what happened to me in just a few months. It changed my life upside down right now. I used to be an emotional person, emotions controlled me always. But now, I am still [emotional], but itâ€™s not like before. Itâ€™s different, more practical.â€

Younan is living with her aunt and uncle in Skokie now, and she still maintains the strong bond with her mother that brought them both to America.

Although she is busier now than she had ever been in Iraq and even in Syria, Younan says she doesnâ€™t mind it. She is not

"I always make plans. I make notes because there are a lot of things going on," Younan says.

â€œa lay-down person,â€ she assures me, in the Oakton College recreation room, the sounds of a ping pong game reverberating in the background.

[audio:https://immigrantconnect.medill.northwestern.edu/wp-content/uploads/2011/12/sandydriving1.mp3] Younan talks of not being a lay-down driver or shopper or friend

The letter she received changed her life in good and bad ways, Younan says. Because of it, she was allowed to come to the United States, an opportunity that was nearly unattainable before the war began in 2003. But she also lost three to four years of her life, she says, because her university credits from Iraq did not transfer over and she lost a whole year in Syria.

Younan is finishing her second year at Oakton Community College and has been accepted at University of Illinois at Chicago to pursue a degree in chemical engineering. She looks forward to the future, to finishing her degree and continuing to build her new life in America.

â€œI have to get over my past,â€ Younan says. â€œI have to think, if something bad happens to me, I donâ€™t have to connect that to these people or my past. Thatâ€™s it. There is a full stop and I started over. That stopped when I moved out of the city, out of Baghdad. Thatâ€™s the full stop of my life. I turned another page, and still, Iâ€™m turning all these pages now. Thatâ€™s a new life, from zero.â€