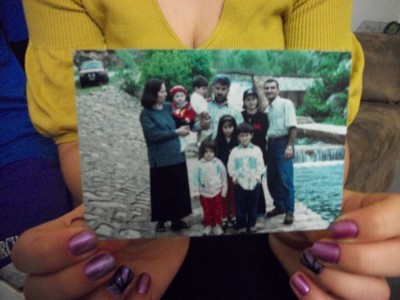 The man on the far right in the white shirt and blue jeans is one of the cousins who was kidnapped.

When her youngest son Elmar came home one day in Iraq, he started to mimic Muslim prayer traditions. He laid out a carpet on their floor to pray, and washed his hands and feet. As a devout Assyrian Christian, his mother, Mariya,* was shocked. The shock and anger deepened when Mariya discovered that Elmar learned the traditions from his teachers at school.

Mariya says that her kids would tell her they didn’t know how to act and that their religious beliefs were caught in the middle.

Many of the memories Mariya has of her homeland lead down two tracks: her children and her Christian faith. The two collided back in Iraq, where Mariyaâ€™s children often faced persecution at their schools because of their religion. The intimidation usually went unpunished and sometimes perpetuated by their teachers.

â€œEvery day, Muslims tell, â€˜This country is not for Christians, this is for Islams,â€â€™ she says.

For Mariya, discrimination based on her Christian faith is a topic that often lurked close to home, especially after her two cousins, Remon and Admon, were kidnapped and presumably killed by Muslim terrorists. The cousins were brothers, and owned a small business, where they found a letter stating they should close shop. Because they needed money, they continued the business until they were kidnapped. After their families gave the terrorists the ransom money they demanded, Mariyaâ€™s cousins were still not returned.

Mariya believes one of the reasons her cousins were targeted was because they were Christian business owners.

â€œTill now, we donâ€™t know anything about them,â€ she says.

Before coming to the United States in 2009, the family lived in Baghdad. Her husband Andrios worked in the Iraqi Army for 12 years and later became a driver for the United Nations.

However, Mariya says, both she and Andrios were jobless once former President George W. Bush brought troops to Iraq. Terrorists, Mariya adds, would kill anyone who worked for an international organization or company.

Mariya turned her attention to the school system, in which her children faced injustice from faculty and bullying from classmates for their Christian beliefs.

For Arkad, her oldest son, bullying often meant getting beaten up almost every day when he was about 10 years old. He says boys who were 19 or 21 would hold him so that boys his age could hit him. In order to avoid the beatings, he often played with friends at home.

â€œThe teachers treated us almost all equal,â€ Arkad says. â€œAfter school, people would hurt you and make fun of you because youâ€™re Christian. In school, they canâ€™t do anything, theyâ€™re scared of teachers.â€

For his older sister Shana, much of the abuse she remembers happened inside school at the hands of her teachers and classmates.

If you were like Christian, Muslims would hurt you a lot,â€ Shana says. â€œSo they would call you names. And sometimes they would force you to wear hijab. And they would tell us like you guys are not going to the heaven, you guys have to be Muslims. Itâ€™s our country, itâ€™s like Muslim country, itâ€™s not your country.â€

The insults, the 18-year-old explains, sometimes came from best friends.

â€œThe closest friends would tell you this,â€ Shana says. â€œThey were my friends. You had to have friend with somebody.â€

Shana adds even though she had Muslims friends, they often felt she was different.

â€œYouâ€™re going out with them, youâ€™re talking to them, they still feel like youâ€™re not with them,â€ she says. â€œThey try to make me like them.â€

Teachers would also make it difficult for Shana to embrace her Christian religion.

When her teachers taught the Quran to students, they would not allow Shana or other Christian students to leave the classroom.

â€œWhen the teacher teach Quran, Assyrians should go out, should not stay in that class,â€ she says. â€œThey would force us to stay in class. So maybe we can change our mind.â€

Along with learning the Quran, Shana was also pressured to participate in other Muslim traditions, such as fasting for Ramadan and wearing the hijab, a Muslim headscarf for girls. She says even though food was offered in school during Ramadan for Christian students, she still felt she could not eat without being harassed by her Muslim classmates.

â€œFor students, it was bad for you because if you eat and drink in front of other students, they will get mad at you.â€ Shana says. â€œAnd you will be in trouble with students, not with teachers.â€

Although Shana often told her mother about what she experienced at school, she says her mother couldn’t do anything about the bullying. Even if her mother approached school officials with complaints, she says, they would either do nothing or give a lecture that would later be dismissed by classmates.

â€œYou donâ€™t have freedom in your country to be what you want to be,â€ Shana says. â€œMy mom couldnâ€™t do nothing. Theyâ€™re like more than us. What can you do?â€ 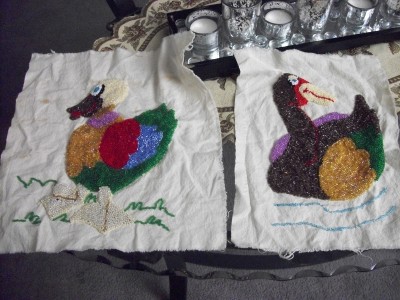 Art projects the children brought with them from Baghdad. They'd submitted them in an art contest back in Iraq.

â€œYou canâ€™t feel safety in my country,â€ Mariya says. â€œWhen my kids go to school every day I hug (them) because I donâ€™t know if they came back or no.â€

[audio:https://immigrantconnect.medill.northwestern.edu/wp-content/uploads/2011/12/MariaAudio2.mp3] Mariya recounts that safety and religious freedom were intertwined.

When Shana was about 12 years old, she says she remembers seeing a dead body on the ground while walking home from school. She could not talk or eat for a week.

â€œThat was just like a dream,â€ she says. â€œNot a good dream. I was always thinking about it, having nightmares about it. I couldnâ€™t eat because of the blood I saw.â€

In order to escape the political instability and religious persecution in Iraq, Mariya and her children moved to Syria in 2008 and stayed for six months. After that stay, they were resettled in the United States, where they joined Mariyaâ€™s husband, who remained in the United States after visiting his uncle in 2007.

She and her children agree that coming to America was beneficial. They no longer face repeated discrimination.

* Mariya preferred to not have her last name be used so it would be easier for her and her family to return to Iraq someday.