A few people enter the small, one-room house, speaking several different languages. Darfurian refugee Abdulkarim Lazim tries to understand everything they are saying, focusing on his native Arabic while not wanting to miss the English that the United Nations High Commissioner for Refugees (UNHCR) workers are directing his way.

After one year in Kakuma refugee camp in Kenya, Lazim has lost his youngest son of five months to malaria. Just months earlier, after childbirth, his wife had died of the same cause.

Amidst the apologies for his losses, UNHCR officials ask for Lazimâ€™s ration card, and mention giving him a position in â€œField Force 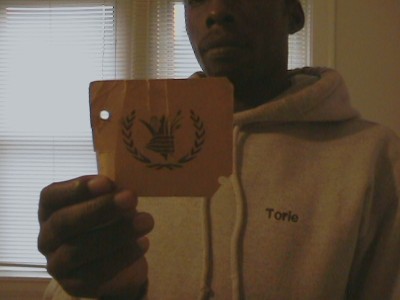 1,â€ where he will earn more money and food to support himself and the two other children now solely in his care. Someone also mentions that he should come to an interview, like ones he has seen hundreds of fellow refugees try to obtain.

Could there really be a silver lining in his familyâ€™s future amidst all the extreme hardship they have endured in the past five years?

Lazim grew up in Jinena, a small village in Darfurian Sudan, where he worked as a gardener on a farm. In 2002, at the age of 22, he married Halima Ishac Adam, and they had their first son, Abdulmonim.

In the spring of 2003, just a year after they had started a family, the political conflict between the Sudanese government forces, or the Janjaweed, and the Darfuri rebel movements reached Lazimâ€™s village.

â€œIn Jinena, the government was coming inside houses, burning them down,â€ Lazim remembers. â€œThey were shooting people with guns, and from planes, all people were dying.â€

When the Janjaweed attacked, people fled, dispersing in an attempt to get their families to safety. Lazim and his family did not look back. Now, more than eight years later, he still does not know where his friends and relatives are.

[audio:https://immigrantconnect.medill.northwestern.edu/wp-content/uploads/2011/12/audio-1.mp3] Listen to Lazim reflect on his departure from Jinena

Lazim and his family spent the next few months traversing Darfur in search of safety, until they arrived at a refugee settlement aided by UNHCR and other humanitarian NGOs in the Nuba mountains of Darfur. There the couple had a baby girl, Selima, and within the year the family was chosen to leave the over-crowded settlement.

â€œIn Nuba, a plane came and UNHCR asked me my name. I said, â€˜Abdulkarim,â€™ and they said â€˜okay bring all of your family,â€™ and we were brought to Kakuma refugee camp.â€

Though the move to Kakuma took the family further away from the violence consuming their native land, the immense refugee

In Kakuma, refugees live in thatch-roofed huts and must stay on the grounds unless given permisson to leave

camp did not bring his family closer to physical or emotional safety. Within one year of arriving in Kakuma, both his wife and newborn son Abdulatif were gone, victims of malaria.

Lazim was left to cope with immense grief while struggling to support Abdulmonim and Selima with only a small food ration and little money. People chipped in. Though tragedies like his were not rare among refugees, people were drawn to Lazimâ€™s personality and good humor.

â€œRefugees from all different countries – Somali, Congoli, Burundi, Rwandi, Sudanese – too many of them face death in the refugee camps,â€ Lazim recollects. As officials from UNCHR and other NGOs came to his home to offer condolences, his plight became a priority for resettlement.

[audio:https://immigrantconnect.medill.northwestern.edu/wp-content/uploads/2011/12/audio-2.mp3] Listen to Lazim describe his problem with UNHCR after the death of his wife and son

Soon after evaluating his situation and providing him with a better job in Kakuma, UNHCR spoke to Lazim about setting up his interview to be resettled in Canada, Australia, or the United States.

According to Greg Wangerin, executive director of RefugeeOne, a resettlement agency in Chicago, â€œWhen a refugee has endured exceptional hardship, and it is brought to the attention of the United States government via UNHCR or other management groups in a refugee camp, this human right issue can drive a particular refugeeâ€™s resettlement.â€

In Lazimâ€™s case, it drove him and his two children to Chicago, and an affiliation with RefugeeOne.

On Sept. 7, 2011, only a few months ago, they arrived at Chicagoâ€™s Oâ€™ Hare Airport. Fifty Kakuma refugees were resettled that day. Lazim and his children were the only ones to go to Chicago. 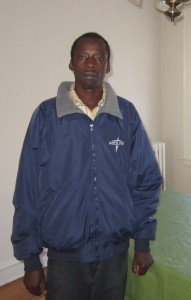 Abdulkarim Lazim in the kitchen of his Chicago apartment

â€œNow I have a home, my kids are going to school, I am learning English, people are helping me, RefugeeOne is helping me,â€ Lazim says. â€œNow I am happier and more adjusted to my new life than my first days in Chicago when I was so worried about how to live, how to communicate. Now I am more comfortable.â€

Lazim worries that his limited English will keep him from finding a job, and if he does, how he will juggle a job and still care for his children. For now, he is focusing on taking ESL classes through RefugeeOne and getting his children settled in their new life in Chicago.

Lazim doubts he will ever return to Sudan to live, even if the political situation improves.

â€œIf things got better in Darfur, first I would want to find out if my relatives are alive or not, and then I would think about it,â€ he says, â€œBut most likely I would return to the United States because here there is more security, education for my kids would be better, and I could also get an education.â€

Lazim finds himself comparing life in the United States with what he endured in Kakuma, and being grateful, whether it is education, the weather or food.

As I prepare to leave Lazimâ€™s apartment after our interview, he asks me the time. 2:40 p.m., I tell him, and he darts into his room, returning quickly with a jacket, and ushers me to the door.

As we walk briskly down the sidewalk, he explains that he wants to go to the supermarket to buy some okra so that he can 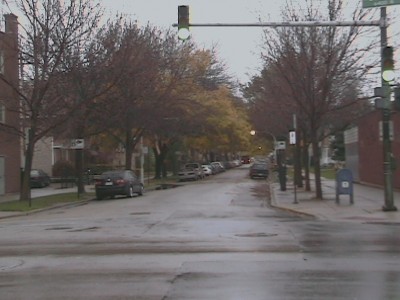 prepare it for his children before he takes the bus to pick them up from school.

He takes the losses of his wife and his son, and the uncertainty of what has become of friends and relatives from Jinena, with him. Still, his two children have a future, and heâ€™s attending to that.