Getting by after Iraq with help from friends

â€œSome of my best friends are Marines and other soldiers,â€ Sam says. â€œThe Army is like a family, which 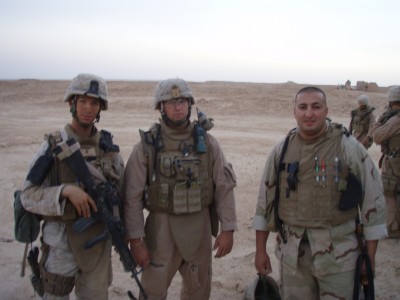 is very true, because I saw those people more than I saw my family. They even talk to me more than they talk to their own wives.â€

Sam recalls his daily schedule with his military friends, rising in the morning to eat together, taking cultural training classes, and going to the gym. Over the last eight years, he has gained friends from all over the world, through the U.S. bases he supported. Some soldiers have returned to the United States, some have returned to Iraq, and others sent to other countries. His 25 Facebook friends exchange advice and life updates; including the birth of one friendâ€™s son, hopes to meet up in America, and Call of Duty challenges.

Sam left Iraq for what he hopes will be for good and came to Chicago August 1 of this year. He is an Iraqi immigrant, who served as a translator for the United States military over the last eight years.

Sam, now 34, is hoping this sixth resettlement will be his last. Leaving behind his parents, a brother, wife and three young children, ages five, three, and one, Sam is focused on making a solid foundation to lead a secure life in Chicago.

He has not known a secure home since 2003 when the Iraq War began. Despite his parentsâ€™ warnings, he volunteered with U.S. troops as a translator. After two months of volunteering, they offered him a steady position earning $1,500 per month.

Working for the United States made Sam a target. Red flags compromising him and his familyâ€™s safety along the way eventually led to his decision that enough was enough and he needed to find safety.

â€œMany Iraqis feared the United States. They had been under Saddam and worried the U.S. would mislead the people. A lot of people came to realize that the troops werenâ€™t like that, but a lot of violence happened first,â€ he says.

Beginning in 2004, Sam first encountered threats. He observed people chasing him. He remembers three or four situations in which he had to fight insurgents. He adopted habits to prevent people from following him. â€œInstead of driving for 10 minutes, I would drive for three hours, just to make sure no one is chasing me,â€ he says. Tired of running from pursuers in his hometown, he left his parentsâ€™ house. 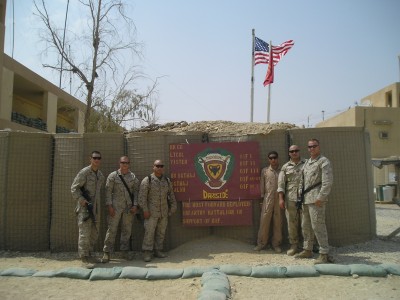 Sam stands with five American serviceman alongside a sign stating, "The most forward deployed infantry battalion in support of 'OIF' or Operation Iraqi Freedom."

As time wore on, he developed relationships with military officers and took on additional responsibilities, including recruiting other Iraqis. One recruit was his younger brother.

Sam tried to make sure his brother was safe, but he worked in another part of Iraq and couldnâ€™t protect him in one of the worse areas in Baghdad. â€œThey had him guarding the city council building. One day he called me and told me three people tried to break in when he was on duty. I gave him some training advice, body armor, and everything. A couple days later, they attacked him and he was shot in the chest three times,â€ Sam recounts. â€œHe drove to the hospital and because it was not good treatment, they let him die.â€

Shortly after, Samâ€™s wife – whom he married in 2005 – and his mother found a note on their front door warning them. His father encouraged him to pursue ways to flee the country; he did not want to lose another son.

Samâ€™s sister who moved to Canada in 1994 presented a solution. Sam traveled with his wife and infant son to the Canadian embassy in neighboring Jordan in August 2007, but they were denied a visa.

A military friend encouraged him to travel to seek asylum as an Iraqi refugee in Turkey, where he was met with even more tension. Turkish officials greeted him with contempt saying he betrayed Saddam and was a traitor to his country. After spending four months in Turkey with his case on hold and an again expectant wife growing tired of resettling, they returned to Iraq.

A general for whom he worked in 2005, welcomed him with open arms, but they concocted a story to help him return unharmed.

â€œThe way I went there is very dangerous. If the insurgents knew that I would go back there to work, it would be very dangerous. My dad drove me to the Iraqi checkpoint and we said that my brother had been detained. They felt bad for me and allowed me to go to the American check-point. When I got there, the American soldiers pretended to detain me so that the Iraqis wouldnâ€™t suspect Iâ€™m working for the U.S. I donâ€™t want my dad to get hurt on the way back.â€ The memory of the fake arrest makes him laugh now, but he contends it needed to be done to keep his family safe.

Sam received his last and most urgent threat in 2010. Insurgents broke into his home and his mother found them in the kitchen. They claimed to be friends of his from work, using his birth name, and told her he needed to get in contact with them. â€œMy mom called me immediately because nobody knew my real name at work and I told everyone to leave. The next day they sent me a text message telling me I should quit or they would harm my parents,â€ he says.

[audio:https://immigrantconnect.medill.northwestern.edu/wp-content/uploads/2011/12/moved-six-times.mp3] Sam recounts the many times he’s had to pick up and leave

Every time he moved he depleted his savings, but as always his soldier friends had taught him skills to reestablish himself. They came through again suggesting a law that would help him relocate to the United Sates.

Section 1059 of the National Defense Authorization Act for Fiscal Year 2006, authorizes the issuance of up to 50 Special Immigrant Visas (SIVs) annually to Iraqi and Afghan translators and interpreters working for the U.S. military and who are Iraq or Afghani nationals.

In 2011, after significant paperwork and three years of waiting, he was finally cleared to leave. He traveled with a suitcase and handbag filled with clothes, pictures and his laptop to Chicago where he was received by his uncle.

An officer welcomed him, saying, â€œyouâ€™ve done more for the United States than most people have,â€ and facilitated smooth passage through immigration.

â€œMy uncle was late picking me up from the airport,â€ Sam recalls. His uncle had orchestrated an elaborate surprise reunion with Sam and his older sister. They had not seen one another since she left Iraq. He spent a week in Woodridge, Illinois, reuniting with family.

He met his case manager at Heartland Alliance in Ravenswood on Chicagoâ€™s north side. They are his primary source of support. The organization paid the first three monthsâ€™ rent for his furnished Rogers Park apartment and provided job leads at a local TJ Maxx.

[audiohttps://immigrantconnect.medill.northwestern.edu/wp-content/uploads/2011/12/thankful-to-Heartland.mp3] Sam says he wouldn’t have known how to go about it 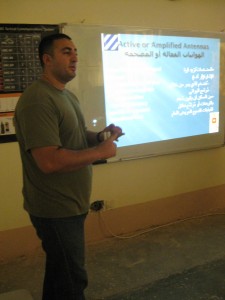 Sam leading a course in Arabic

These days he is difficult to track down. He works as a front desk attendant in a Chicago hotel, a job that was referred to him by his uncleâ€™s friend.

In addition to Heartland and his uncles, military friends continue to support his transition. â€œThe most important support to me is the advice.Â  These guys will do anything. Even if theyâ€™re overseas, they will respond right away,â€ he says. â€œI had tons of information and knowledge so that when I got here it wasnâ€™t that hard for me. They directed me to get a good job.â€

Discussing stories about the men and women who are playing such an important role in his life, Sam doesnâ€™t like to share everything. One of the strongest, yet most difficult, memories Sam recounts is of an attack by insurgents in Iraq. Pressed to share, with his eyes cast downward, he recalls the attack.

â€œI remember everything. I canâ€™t forget any one of them. Some tragedy happened. I was with one of the units and suddenly we had an attack and we started chasing the terrorists. Then one of the terrorists – the one that I was following – grabbed a kid from the street and cut his throat. He tried to confuse us, make us think he got wounded, so we followed the child with blood. Then when we tried to go back to the house and the house was booby-trapped. He blew it up. So thatâ€™s what sticks with me forever, because that kid was so innocent. He was like a 6 or 7-year-old kid.â€

Itâ€™s memories like this one that cause him to worry about the future of Iraq after all American troops depart. He worries once the troops leave, they may come after him and since heâ€™s not there, they may come after his family. â€œIâ€™m trying to resettle them. Through the SIV they can join me, but even if they donâ€™t want to come here, Iâ€™ve persuaded them to move to different houses in Iraq,â€ he says.

Ideally, the children would be educated in America, but he wants to earn more money first. His associateâ€™s degree in water filtration and bachelorâ€™s degree in English language donâ€™t translate to American careers. He wants to pursue a commercial driverâ€™s license, which he hopes will be his entrÃ©e to other states. Eventually, he wants to move to the countryside, but all plans are long-term.

In the meantime, he knows his friends will continue to support his transition, offering to pay for plane tickets for him to visit them in their American hometowns. Their parents continue to send him care packages.

[audio:https://immigrantconnect.medill.northwestern.edu/wp-content/uploads/2011/12/friends-helping-out.mp3] Sam marvels at the help he’s getting from his American friends

His life in Iraq is over. â€œI would do the same thing because I found myself responsible to do something to stop harming both Americans and Iraqis,â€ he says.