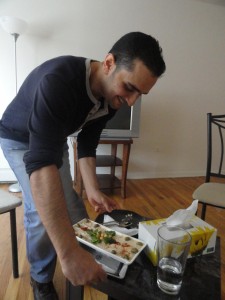 Hayder Al-Suhail was hiding something from his mother, not intending to hurt her. He wanted to protect her. He’d only been in the United States for less than a year when he received the good news. He decided to break it to her.

When he left Baghdad for the U.S. in February 2011, Al-Suhail was in the middle of fighting for his life in a battle against testicular cancer. Shortly after arriving and receiving treatment, he told his mother he was cured. He lied.

Now every time he calls his mother, she greets him with the same question: â€œAre you sure youâ€™re cancer free?â€ she asks, â€œbecause I donâ€™t believe you anymore.â€ He laughs.

Al-Suhail made the journey to Chicago with his older brother. He was seeking improved medical care while his brother was seeking refuge from reprisals. He had previously worked as a translator for the U.S. forces in Iraq.

Diagnosed with Stage 1 testicular cancer, Al-Suahail sought treatment first in Iraq, but when he and his brother were cleared to move to America he could not resist the chance for better treatment and a new life. With the help of the International Organization for Migration [IOM] and RefugeeOne, the brothers settled in Rogers Park on Chicagoâ€™s north side.

[audio:https://immigrantconnect.medill.northwestern.edu/wp-content/uploads/2012/01/Hayder66.mp3] Listen to Hayder share the moment the doctors told him he was cancer-free

Health care benefits, at least for a while

According to Heartland Alliance, â€œRefugees receive Medicaid benefits for their first eight months in the United States. After those eight months, in Illinois, unless they meet the eligibility criteria of having children or a wife who is pregnant and meet the income requirements, they lose their benefits. This leaves most refugees uninsured at the eight month point.â€

â€œThanks God I came at the exact time,â€ Al-Suhail says.

Al-Suhail was cured of cancer just as the end date of his free medical insurance was nearing in October. With the free medical care, Al-Suhail was able to get treatment, allowing him to start over, cancer-free in America with no debt.

Al-Suhail adds that Americans were more accepting of the disease than Iraqis back home were and therefore supportive of his battle against cancer.Â  In Iraq, people fear the cancer, he says.

[audio:https://immigrantconnect.medill.northwestern.edu/wp-content/uploads/2012/01/Hayder101.mp3] Listen to Hayder talk about how Iraqi people speak about cancer.

Right now, the 32-year-old Al-Suhail is pursuing an IT Certificate so he can find work in the computer technology field in the near future. While he is content studying for an occupation he enjoys, as does his brother, this leaves the brothers with neither a source of income nor adequate health care coverage. Al-Suhail is concerned, but with the complication of transferring a degree, there is not much they can do.

Al-Suhail does not plan to take on a minimum wage job. He holds a bachelorâ€™s degree in microbiology, but lost his appetite for all things biology once he received his cancer diagnosis. Instead, he plans on studying patiently for certification as an IT specialist so he can work a job he is passionate about.

Al-Suhail and his family waited 18 months to hear back from the IOM, and life was not getting easier as more and more Iraqis working for U.S. forces were being killed.

Since his mother and grandmother applied later than the rest of the family, they were forced to split up. The brothers decided against waiting to immigrate together, and left for America.

They were a step ahead of many refugees upon arriving in America. Al-Suhail speaks almost perfect English, only messing up the occasional â€œkitchenâ€ with â€œchicken,â€ because of their similar construction.Â  He profusely apologizes. He credits his high school and university training for his English fluency and speaks decent Italian as well.

Already having worked in Italy after graduating college for three months as an online tutor in an internet cafÃ©, Al-Suhail has traveled to many of Iraqâ€™s neighboring countries and spent time in Dubai looking for work.

â€œYeah, my brother, when we came to Chicago he was like amazed, â€˜Oh wow! It looks like high buildings and everything! Are you excited?â€™ I told him itâ€™s the same like Dubai!â€ he says, laughing.

Life and Struggles in Iraq

Cancer was only part of Al-Suhailâ€™s reason for leaving Iraq. His family lives in fear because of his two brothersâ€™ affiliation with American forces.

His younger brother was a translator. His older brother worked for a contractor as an architect and is still in Iraq waiting for clearance to come over with his mother and grandmother.

As of 2007, according to the American military, there were 69,000 Iraqis who worked on contracts with the Department of Defense through Iraqi and foreign companies. It does not matter what kind of work the Iraqis are hired to do, all of them are in danger, Al-Suhail says, especially now that American troops have departed Iraq.

[audio:https://immigrantconnect.medill.northwestern.edu/wp-content/uploads/2012/01/hayder22.mp3] Listen to Hayder discuss the dangers of life in Iraq

U.S. Embassy spokesmen had been quoted saying that the Iraqis who’d been employed by the U.S. government could get their refugee applications cleared faster if they were able to make it to countries bordering Iraq, like Jordan or Syria.

This was treacherous and costly for many Iraqis, who faced attackers on the road and potential rejection by officials at the border.

â€œAfter the U.S. led invasion, we had a lot of travel problems and you know a lot of militias, secular militias, so this was very dangerous for us to go from neighborhood to another,â€ says Al-Suhail. â€œYou have to have at least two IDs, two fake IDs, so it depends on which neighborhood you are attempting to visit or to go to.”

Al-Suhail feels frustrated, and discusses openly his belief that the U.S. government is not doing enough to get the people who are working faithfully for them protection and expedited immigration to America. Even if translators or contractors are processed for resettlement and cleared to come to America, it is often after a prolonged amount of time spent in constant danger in Iraq.

[audio:https://immigrantconnect.medill.northwestern.edu/wp-content/uploads/2012/01/Hayder44.mp3] Listen to Hayder explain his difficulty in telling AmericansÂ  that the U.S. goverenment, not its people, left behind an impossible situation

Al-Suhail is worried about the state of his old home and his family who still resides there.

â€œThe U.S. troops, when they invaded Iraq, they became like drugs. So if you leave the drugs, maybe you will suffer, and if you stay taking the drug, you will suffer also,” he says. “So we are confused there in Iraq. Itâ€™s like we became addicted.â€

Although technically Al-Suhail has refugee status, he prefers to look at himself as an immigrant.

Intelligent and worldly, Al-Suhail leads a fairly regular American life in Chicago. He loves the transportation system, often taking the train alone to his chemotherapy sessions.

Thriller and horror films are his favorite movie genres, with Lord of the Rings at the top of his list. He uses Facebook to keep in touch with family and friends scattered around the Mediterranean and in Iraq.

[audio:https://immigrantconnect.medill.northwestern.edu/wp-content/uploads/2012/01/Hayder55.mp3] Listen to Hayder describe a typical day and his love of restaurants

Even so, he misses his motherâ€™s home cooking.

â€œHere I didnâ€™t like the pizza, I donâ€™t know, they make it greasy and thick, so thick, and the flavor of my momâ€™s is better.â€

While he is enjoying the newfound freedoms of interacting with women in a more casual manner, he chooses not to smoke or consume alcohol for health, religious and personal reasons.

[audio:https://immigrantconnect.medill.northwestern.edu/wp-content/uploads/2012/01/hayder33.mp3] Hayder recalls the dating situation back in Iraq

Al-Suhail has overcome extraordinary obstacles. He beat cancer in a foreign country that he now calls home, survived years of tumultuous war in Iraq, and through it all has remained level-headed and in awe of all that has happened to him.

â€œItâ€™s like I was born again, I was so excited the first two weeks. Till now I canâ€™t believe that, sometimes when I think of what happened and think that Iâ€™m cancer-free I can’t believe that,â€ he reflects. â€œThe excitement will last for two years or more!â€ he says laughing, with pure joy, as he typically does when discussing his current situation.

Adamant that he was not excited about being in America at first because he was convinced he was going to die, he has changed his perspective. He has been enjoying life in Chicago more than ever, with a completely new outlook on life.

On the train home from receiving word that the cancer was gone, he says he saw the real Chicago for the first time.

â€œWhen I came back home by train, I looked at Chicago and I find it different, different than Chicago for the first eight months, like â€˜Oh my gosh this is Chicago! This is a new life! Look at the buildings, look at the streets!â€™ It was different.â€