In a cacophonic haze of suitcases click-clacking along tiled floors and tongues twisting words heavy and clumsy into submission, stood my mom. Five-foot-one with unassuming brown eyes and hair, the figure of my mother blended easily in the ebb and flow of Beijingâ€™s International Airport.

Walking towards the baggage claim, I marveled at my motherâ€™s confidence in navigating an airport that was alien. Signs were given cursory glances. She commandeered Mandarin with a startling fluidity missing from her English. Calm and composed, my mother controlled the space.

It never occurred to me then that she was just as lost as I was. 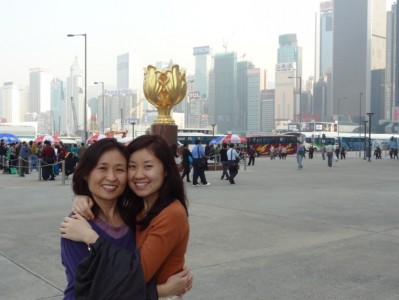 We moved to China in late December 2006 to join my dad, whoâ€™d moved three years prior for work. It was now or never. I was transitioning to high school, so my studies would be minimally affected. Thatâ€™s my parents for you â€“ pragmatists through and through. Doing her best to buoy me, my mom regaled me with tales of a home she remembered from 20 years past.

By birth my mother is a veritable Chinese, with the propensity to wax poetic in the same breath of cussing out the wanbadan, asshole, who cut her off while driving. Yet, legally, she is American. My parents moved to America in the â€˜80s, carving out a life separate from their experience in China. They embraced a new work environment and learned to navigate grocery stores carrying unfamiliar food. They got the hang of using their middle finger less for pointing and more for flipping. They started watching Everybody Loves Raymond.

So when we moved back, it shouldnâ€™t have come as a surprise that my mother struggled just as much as I did to assimilate. She was not the only one who had changed in the last two decades. Beijing was suddenly a city teeming with skyscrapers and wanbadan drivers. My mom had given up her culture, adopted a new one, and was now caught in a paradox of returning to her home with a passport that labeled her as foreign.

As my mom fearlessly led me through the airport, I naively assumed it would be easy for her to slip back into the fit of China.

Clutching my hand, my mother drew me closer as we waited for our luggage to emerge from the cavernous mouth of the conveyor belt. I realize now that my mom, exhausted and slightly displaced, was using my hand as an anchor to ground her in an unfamiliar reality.

Pushing a cart and fingers still entwined, we walked out of the doors that would lead us to a home both old and new.