African activism coming off the sidelines 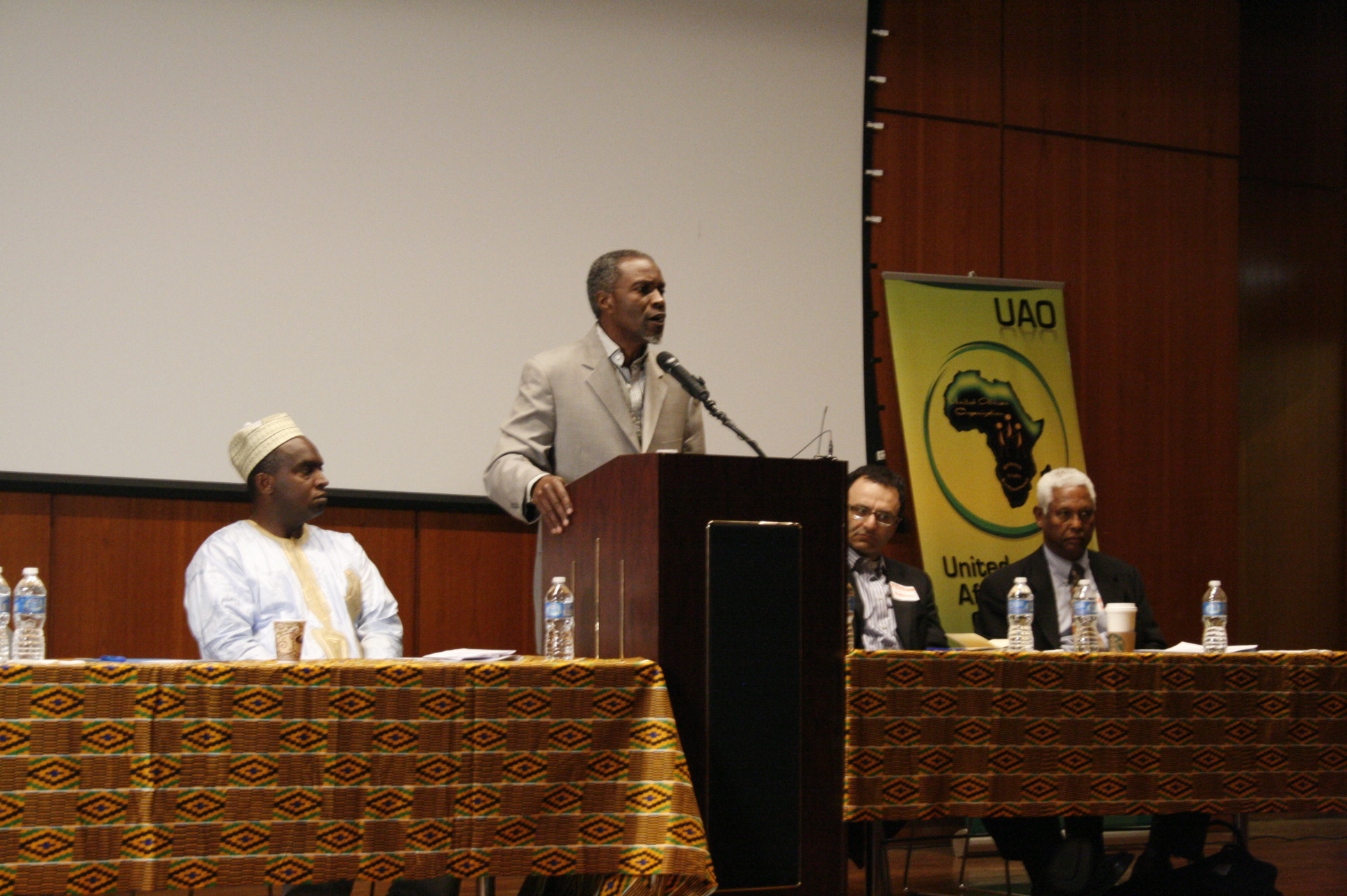 Drums and pipes boom over the loudspeakers as a handful of women start to sing. One woman in traditional Ethiopian dress demonstrates a series of dances that the audience members imitate in their seats. The attendees of the sixth annual Chicago Summit on African Immigrants and Refugees join in the dance to share African culture with local government leaders. The summit, hosted by the United African Organization (UAO), included speaker panels and a community resource fair. Hundreds gathered on the campus of the Illinois Institute of Technology (IIT) on the city’s near South Side to show that their voices counted in conversations around immigration, education, and health care.

For African immigrants who met on May 12, the meeting marked progress in the advancement of community issues.

â€œToday weâ€™ll focus on the ways that we can start to think about organizing nationally an African immigrant leadership that will raise our visibility and our voices,â€ said Alie Kabba, executive director of the UAO. 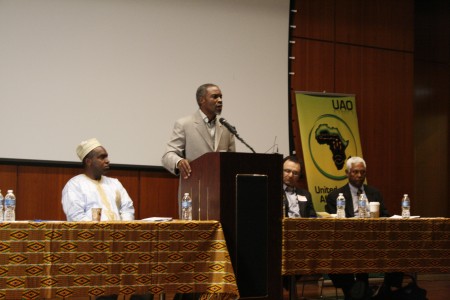 The Chicago African Summit is just one example of immigrants, politicians, and community leaders uniting to publicly address the issues that matter most.Â  Even as immigrants continue to engage with community organizations, leaders say immigrants remain largely uninvolved in national policy issues.

â€œAfrican immigrants need to stop acting like they are here temporarily,â€ says James Thindwa, a Chicago community organizer. Thindwa recently facilitated an African leadership workshop in conjunction with the UAO.

â€œRight now, in the US, when it comes to policy, sitting on the sidelines is not an option,â€ he says.

Chicago is home to more than 23,000 African immigrants, according to the Roosevelt University Institute for Metropolitan Affairs. For these individuals, African community organizations provide a platform to unite around local issues and support immigrants in their daily lives. Immigrant leaders believe that organizing is the first step in achieving national visibility.

â€œHow do we bring these Africans to organize? We must start from regional bases like the UAO,â€ says Erku Yimer, director of the Ethiopian Community Association of Chicago. â€œAfricans cannot obtain power without national organizations.â€

The UAO is a coalition of 26 regional organizations that provide support services like cultural orientations, job skill training, and guidance through the process of obtaining citizenship. Groups like these also work to engage the population in such local issues as redistricting and voter mobilization. Although community organizations do not endorse specific candidates, they promote issues that may be prevalent in upcoming elections.

The Umu Igbo Alliance organization also focuses on supporting young African professionals, including those who may become political leaders.

In addition to community organizing, individual African immigrants in Chicago are running for local political office to represent their community.

Befekadu Retta, an Ethiopian refugee, ran for city alderman in the Uptown neighborhood of Chicagoâ€™s 46th ward in 2011. He wanted to expand public housing and improve his neighborhoodâ€™s safety. At the end of the 11-candidate race, Retta came in eighth, collecting 607 of his wardâ€™s 13,906 votes.

According to Retta, leaders in his community need to spread word about political involvement. He says that not enough people from his community voted in his election race.

â€œWhen you go to campaign, they say they will vote, and then they donâ€™t come out,â€ he says.

â€œ[The future] is promising, but first we have to involve, to recruit, to educate, and to register to vote,â€ he says.

â€œI donâ€™t like politics. I donâ€™t get involved in politics,â€ says Sedekie Sackor, a Liberian refugee. Sackor stands in the crowded lobby of the Chicago African Summit during a break between speakers. The refugee came to support the UAO, but like many other immigrants, is not interested in participating in conversations on national policy.

Community organizations in Chicago struggle to get immigrants involved in national politics, say leaders like James Thindwa. He says that African immigrants often stay away from American politics because they continue to feel like outsiders.

â€œAmericans grow up imbued with this sense of [American] nationalism, whereas Africans, who may feel as though they are on the outside, may not want or need to take on this kind of political thought,â€ says Thindwa.

Many established immigrants prioritize daily life over expressing a political voice. Dr. Joseph Lwanga moved to the U.S. from Uganda in the 1970s. Thirty years after moving to Chicago, he insists that national politics do not apply to him. African immigrants, he says, are more focused on surviving than they are on national elections.

â€œWhy should I worry about who is going to be the senator if I cannot pay my gas bill?â€ says Lwanga. â€œEven right now in my state of life, there is no way I am going to worry about [politics], becauseâ€¦I have other mundane things to think about.â€

Tara Weinberg, Research and Policy Associate at the UAO, says Africans are discouraged by the lack of attention paid to them by politicians. Many issues important to Africans could be solved if more politicians put Africans in the spotlight, she says. These issues include reuniting immigrant families and the language barrier that causes problems in receiving health care.

A recent focus on Hispanic populations in the immigration debate has alienated many Africans who would otherwise be inclined to pursue political activism, according to community organizers. Immigration continues to be an important issue for African immigrants on a national scale, but many feel as though they do not have a voice in national discussions.

â€œWe are not addressed in the media. The only groups that are talked about are the Hispanics,â€ says Garcon Morweh, a fellow at the Illinois Coalition for Immigrant and Refugee Rights (ICIRR). 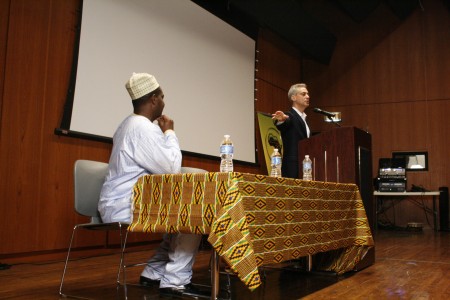 Morweh, originally from Liberia, says Africans are overlooked in national immigration debate because they are choosing to be politically inactive. An increased African participation in voting, campaigning, or raising money is the only way to bring attention to issues important to African immigrants, he says.

Chicago leaders push for an increase in immigrant involvement even as Africans struggle to become politically visible. At the Chicago African Summit, Chicago Mayor Rahm Emanuel spoke about the promising future of African involvement in American politics. He narrated a scene from an immigration office, where individuals finished their citizenship documents. That office, he said, is the birthplace of African political activism.