Ahmed Alrais: An argument settled, they’re in the U.S. to stay

[This is one of a three-part family profile. Read the companion stories about Ahmed Alrais’ wife – Nada Alkadar: Needing help to help others – and their daughter -Â  Shahad Alrais: Settling into Chicago, and loving it]

Ahmed Alrais remembers an argument he and his wife, Nada, had before they moved to the United States. His wife wanted to stay in Egypt, where the family had been living for two years. Alrais was working in real estate while Nada was working with Universal Concepts of Mental Arithmetic Systems, an after-school program. However, Alrais argued that he did not feel safe in most Arab countries, noting the volatile nature of their politics.

Alrais describes the time as â€œa vacation,â€ but in the back of his mind, Alrais knew that he would never be seen as a citizen the way he would if he moved to the United States. Alrais said he was honest with his family. He would move to the United States and his family could either join him or stay in Egypt. The family decided to join him.

The trip to the United States was just one of many journeys for Alrais. As the son of the

Alrais at his home in Iraq.

ambassador for the Iraqi Foreign Minister, Alrais barely spent the first 15 years of his life in Iraq. When Alrais was outside of Iraq, he was taught at American schools, which led to a proficiency in English. He speaks clearly and rarely fumbles over English phrases.

His 25 years in Iraq spanned the Iraq war with Iran, the first Gulf War and the United States invasion of Iraq. During that time, Alrais was given two opportunities by his brothers to move away from Iraq to Bahrain and the United Arab Emirates. Alrais opted out on both occasions because, he says, he preferred to live in Iraq where his friends were.

The day it all changed

That all changed after 2003. One morning, Alrais accidentally slept in. Since he had a good track record at work, he took his time shaving and getting ready. Alrais said he was 15 to 20 minutes late for work when he finally joined his company driver.

The driver tried to take the usual route to work, but on that day the roads were closed. Alraisâ€™ driver took a longer route, unaware of the reason for the detour.

The next day Alrais took his regular route to work. Newspapers were scattered in the area, so he asked a policeman what happened. An improvised explosive device was planted at a newsstand Alrais would visit every day on his way to work.

Alrais realized why was targeted in the attack. He worked as an interpreter with the U.S. Army.

After the invasion by the United States, Alrais learned that the Kuwaitis were working as translators for the U.S. Army and suspected that the translations were not coming out right.

Alrais decided to become an interpreter for the U.S. Army. However, Alrais said that extremists in Iraq questioned his loyalty and believed he was siding with the United States.

[audio:https://immigrantconnect.medill.northwestern.edu/wp-content/uploads/2012/05/Ahmed-Invasion-of-Iraq.mp3|titles=Ahmed (Invasion of Iraq)] Alrais explains how hard it was, and still is, to not be doctrinaire about the US invasion

The possibility of being targeted by extremists caused Alrais to become paranoid about his surroundings. He said he would keep looking in car mirrors to make sure no one was following him.

â€œWhen the beheadings started in Iraq, I quit,â€ Alrais said.

After the bomb attack, Alrais moved to an area that was closer to where he worked. However, the area was dominated by Shiite Muslims and his family was threatened because they are Sunni.

Alrais and his family moved out of Iraq in 2006 and lived in Egypt for two years. The family was able to establish a comfortable living. Still, Alrais says, he wanted to go to a place where he could become a citizen. After the argument with Nada, Alrais and his family boarded a plane and on May 14, 2008, they arrived in the United States.

Adjusting to the United States 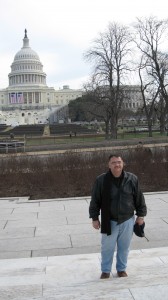 Alrais says he’s had a tough time finding a job since coming to the U.S. He attributes this to being 49 when he moved. His children were better off.

[audio:https://immigrantconnect.medill.northwestern.edu/wp-content/uploads/2012/05/Ahmed-Finding-a-Job.mp3|titles=Ahmed Finding a Job] Alrais explains his difficulties in finding a job

He took the only job that was offered to him at the time. He became an interpreter for the U.S. Army again, this time in Washington D.C.

Alrais says he’s also had a hard time finding a sense of community in his new home. Americans work all day, he notes, and use the weekends to spend time with their families.

â€œIâ€™ve been living in the same place for more than four years,â€ Alrais says. â€œBy May 2013, it will be five years at the same address. I donâ€™t know my neighbors.â€

Alrais says he feels no connection to his neighbors beyond a simple, â€œHi.â€ The people in Chicago remind him of the people in Paris, believing that both don’t like to make a lot of friendships. That doesn’t mean that Alrais struggles to make friends outside of Iraq. In his visits to Germany and England, he’s found it easier.

An old friend has come through for him. Though Alrais had not seen him since 1980, they reconnected recently on Facebook.Â  The friend came to visit Alrais in Chicago, and during the visit, his friend mentioned that his wife knew someone who was connected to the restaurants in Wrigley Field. Alrais interviewed and landed a job as a cook at the United Club in Wrigley Field.

According to Alrais, his familyâ€™s reaction to his new job was not one of jubilation, but of relief.

â€œIt wasn’t like a great reaction because it was, like, I finally got a job in Chicago,â€ he says.

When he is not working at Wrigley Field, Alrais helps his wife Nada at a center she started, Uruk Human Services, which seeks to help Iraqi refugees. The center has been struggling to stay afloat, so Alrais has been volunteering at the center whenever he can. He’s given his laptop to his wife to make handling the work easier.

Alrais recently asked his children if they were happy in the United States or if they thought they made a mistake moving here. Their response was completely positive.

That two-year “vacation” in the Arab world, as Alrais calls it, is long since over, and the whole family is in agreement now.Â  They’re in the United States for the long run.

[audio:https://immigrantconnect.medill.northwestern.edu/wp-content/uploads/2012/05/Ahmed-Wife-and-US.mp3|titles=Ahmed (Wife and US)] Listen to Alrais sum it all up