An election dilemma for Poles: Vote religion or immigration

[A version of this story ran in Polish on the InformacjeUSA.com web site. Read that version here.]

Beata Kucybala is conflicted. In the 2012 presidential election, Kucybalaâ€™s Roman Catholic beliefs will dictate her vote. But as an immigrant, her decision isnâ€™t that simple.

Kucybala immigrated to Chicago in 1993 from Mikolow, a small town in southern Poland. She agrees with traditional Roman Catholic stances on controversial social issues.

â€œAbortion and gay marriage for me? No way,â€ she says. â€œNo way.â€ 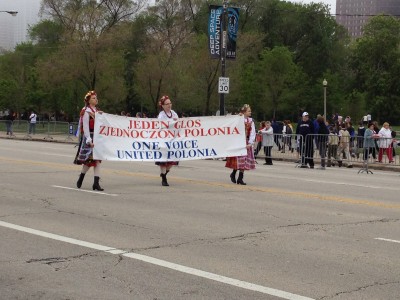 Children in the Polish Constitution Day Parade carry a banner with this year's theme, "One Voice - United Polonia."

Marcin (who asked that his last name not be used), 34, attended the Polish Constitution Day parade in Chicago on May 5. Despite the chilly weather, thousands of Poles, both immigrants and people of Polish descent, formed a sea of red and white – Polandâ€™s national colors – as they celebrated their country and their heritage.

Marcin has been in America for seven years. He is here on a student visa, and studies at an English language school in Chicago.

â€œPeople are confused,â€ Marcin says. â€œThey would vote for the party which is more for the immigrant reform, but [that party] is more pro-abortion. Most of the Catholic people, they are not accepting abortion. So that is why they are confused.â€

Because of the emphasis on religion in the Polish community, many Polish immigrants are faced with a dilemma: they must reconcile their religious beliefs with their political views. Religious Polish immigrants tend to favor a candidate or party with a conservative stance on social issues, even if that means sacrificing progress on immigrantsâ€™ pathways to citizenship. Because of this, many Polish people, once they gain citizenship, vote Republican. Mitt Romney, the likely Republican presidential nominee, stands by his party, opposing abortion and gay marriage. 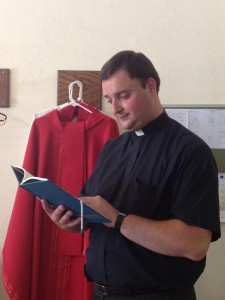 The Rev. Gorczyca after his sermon at St. Pascal's. Though his parish is in Palatine, Ill., he made a guest appearance at this Portage Park church.

St. Pascal Catholic Church is a beautiful and towering church on the Northwest side of Chicago, right off Irving. At noon on Sundays, mass is in Polish, catering to the overwhelmingly Polish Portage Park neighborhood the church serves.

The Rev. Gregorz Gorczyca is an associate pastor at St. Theresaâ€™s church in Palatine, Ill. He occasionally makes guest appearances at St. Pascalâ€™s. Gorczyca immigrated to the United States from Poland 11 years ago. Still on the path to citizenship, he cannot vote, but sides with the Republican party because of his religious beliefs.

â€œI see some dangers coming with liberalism,â€ Gorczyca says. â€œWhen people try to choose whatever they think works for them, they donâ€™t really look at the truth of Jesus Christ, the truth of the gospel. They just pick whatever they want because it works for [them.]â€

He also sides with Republicans on the topic of immigration reform, believing strongly in legal immigration only.

â€œOf course we want people to come and become a part of this society and country and acknowledge our values,…but I can see there are some problems with just coming here and taking advantage of everything,â€ he says. â€œYes, life is not easy, problems arise, but we need to look for ways of helping people, not just taking them as they come. Iâ€™m not against immigration, Iâ€™m an immigrant myself, but there should be some legal ways of coming here.â€

Marcin goes to church every Sunday. While he wants immigration reform, he believes abortion is a more pressing and dire issue.

â€œMaybe thousands, a hundred thousand children are lost because of abortion,â€ he said. â€œThis is not good. I cannot agree with abortion just to make immigration law in this country.â€ 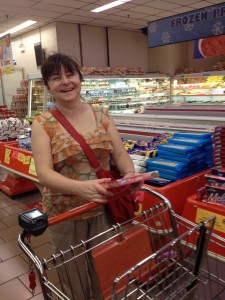 Agnes Zeliznak shops at Wally's Market. She considers religion her first priority when deciding whom to vote for.

Agnes Zeliznak, 43, agrees. Zeliznak shopped for traditional Polish foods at Wallyâ€™s Market, a Polish grocery on West Irving, as she discussed her religious views. She will not vote for Barack Obama because he is pro-abortion rights, even though Democrats are more forgiving toward immigrants.

â€œ[Immigration] is important for me, of course, because I am an immigrant,â€ she says. â€œBut I think religion is first…everyone should respect life…abortion is killing people. Thatâ€™s why I will vote for Romney.â€

It was a Wednesday evening, and the heat was oppressive. Inside the Pub OK, a Polish tavern on West Irving in Portage Park, just a few blocks east of St. Pascalâ€™s, ten or so men were relaxing with an after work beverage – mostly pints of Warka or Okocim, Polish beer. A mix of American rock and what sounded like Polish heavy metal blasted from the speakers.

Michal Dudzinski, 31, had to raise his voice so his friend Rafael could hear him over the somber tones of R.E.M.â€™s â€˜90s hit â€œLosing My Religion.â€ It was appropriate. When Dudzinski was 16, his parents told him that though they had raised him Roman Catholic, it was his decision to keep his faith or not. He goes to church every Sunday, but doesnâ€™t agree with the church on social issues.

â€œIf youâ€™re not fit to have a child, you should have the option to get an abortion,â€ he says. â€œI know itâ€™s against [my religion]. But I think people should be able to choose whatever they want to choose.â€

For him, immigration is a much more important issue, and his vote goes to the candidate who is most lenient on immigration. Though heâ€™s been in America for 11 years and is a citizen, he remembers all too well the struggles immigrants face. 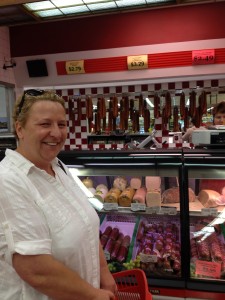 Margaret Hubert shops for sausages at Wally's Market. Having emigrated from Poland 19 years ago, she is now an American citizen.

â€œItâ€™s all about immigration laws,â€ Dudzinski says. â€œI know how it is being an immigrant. What I went through to be here, and what [immigrants] have to comply with. I meet people everyday that donâ€™t have the luxury I have, working legally and all that stuff. But theyâ€™re good people. And that alone is enough for me.â€

Karolina Kucybala, Beataâ€™s 20-year-old daughter, also empathizes with immigrant hardship. Though her family emigrated from Poland when she was only 2 years old, she recalls the difficulties she had adjusting to life in America. A junior at Northwestern University, Karolina is not nearly as religious as her mother. She plans on voting for Obama, and generally leans Democrat, because of immigration policies.

â€œGetting away from all the politics and the economy and all those factors, [I think] about the people and bettering the quality of lives here in America versus trying to do budget reform,â€ she says. â€œItâ€™s [the] things that are more emotional that…resonate with me.â€

As the 2012 election approaches, religious members of the Polish community will have to decide which is more important when choosing a presidential candidate: religion or immigration. Some Polish people keep religion separate from politics and vote based on their personal beliefs, not the beliefs of the church. Most Poles rely heavily on religion when making their decision. Still, religious or not, almost all Polish people in Chicago care deeply about the economy. Ultimately, they are Americans.