Kosta Svirkov stands out in the crowd, dressed in a red, green and white striped shirt that together make up the colors of Bulgaria. He beams at the makeshift stage in front of him, toward the politicians positioned between both the American and Bulgarian flags.

Soaking up the buzzing of people speaking in his native language and the waving of Bulgarian flags, Svirkov is transported right back home.

â€œThere are many Bulgarians here in this city,â€ says Svirkov, of Arlington Heights, a suburb northwest of Chicago, with a contented smile on his face. â€œIn this particular moment, it is as if I am in Bulgaria again, in my place.â€

Svirkov was one of about 200 Bulgarians who gathered at the Chicago Botanic Gardens on May 19, to meet Rosen Pleneliev, the newly elected Bulgarian president. The president visited Chicago as his first trip to the U.S. for the NATO summit. He also appeared at Bulgarian churches and schools as a way of reaching out to Chicagoâ€™s Bulgarian diaspora. 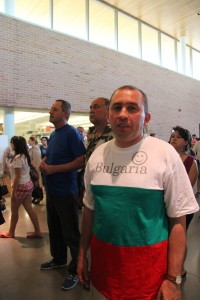 Kosta Svirkov represents his love of home at the Bulgarian President's address in a suburb of Chicago.

But the Bulgarians here have not gathered because of a general engagement in politics. The Consulate General of Bulgaria estimates there are between 150,000-250,000 Bulgarians living in the Chicago area, though the number is unconfirmed and the crowd at Pres. Plenelievâ€™s address is only a small fraction of the population.

Violetta Simov, a physician and well-known leader within Chicagoâ€™s Bulgarian community, says most Bulgarians in the area are not known to be politically active in either country. But after escaping communism, she says, those who can vote in the U.S. will be sure to do so. The 2012 U.S. presidential election is approaching, and Simov says most of the Bulgarians in Chicago who participateâ€”disillusioned by Pres. Barack Obamaâ€” will likely vote Republican.

In the 2008 Presidential election, Simov voted with pride. She believed in Obama. She considered him an intelligent and influential supporter of minorities, a man full of opportunity and optimism for her community.

Four years later, however, Simov will vote for Mitt Romney, a trend reflected throughout the Bulgarian community in Chicago.

â€œOur dear president is such a likeable guy,â€ says Simov. â€œBut unfortunately, Bulgarians wouldnâ€™t vote for him for the simple reason that we left Bulgaria because Bulgaria was a very communist, socialist country, and our president at the time is leading the U.S. towards this regime.â€

Many Bulgarians who voted for Obama in 2008, says Simov, will not support him again this year on the basis that they havenâ€™t seen him keep his promises. The economy is still weak, and people are struggling to find jobs. There have been no drastic changes in immigration reform and Obamacare hits a bit close to home in terms of socializing government.

The combination of these factors is all too similar to the old politics in Bulgaria. 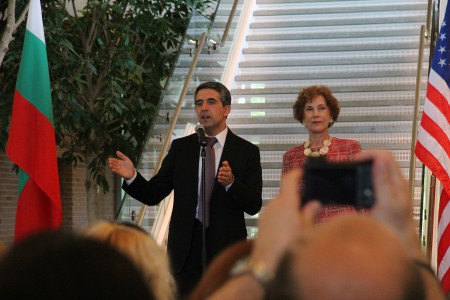 President Rosen Pleneliev addresses a crowd at the Chicago Botanic Gardens during the 2012 NATO Summit.

Dean Dinev, founder of the Bulgarian American Association in Chicago, voted for Obama in 2008. Similar to Simov, however, he will not vote Democratic this year because Obamaâ€™s politics reflect the Bulgarian socialism he escaped by moving to the U.S.

Dinev estimates that as much as 95% of the community will vote Republican, but acknowledges that hard statistics about the community are hard to come by. Many Bulgarian-Americans living in Chicago are illegal immigrants or do not register to vote.

â€œI did the politics in Bulgaria,â€ says Dinev. â€œI voted and tried to change the country from communism. We came here for a much better life, but unfortunately over the past three years, we are coming back to that. We no longer like these politics or this economy. Obama is the politician who is talking very nicely, but he didnâ€™t do anything for the people when he went to the White House, and that is his problem.â€

It is a rainy Sunday morning, and the service has just ended at the New Life Bulgarian Evangelical Church of God in Des Plaines, outside Chicago. The church members are socializing, catching up with each other and waiting out the storm inside. For Bulgarians in the Chicago area, church is central to the community.

At New Life, courses are offered by Deacon Zvezdelin Spassov to help the members understand basic elements of American elections, such as what changes in healthcare will happen after the election? How will the election affect life as an immigrant?

â€œI explain policies to them because normally these policies use too much political language,â€ Spassov says. â€œSo I explain it in plain Bulgarian.â€ 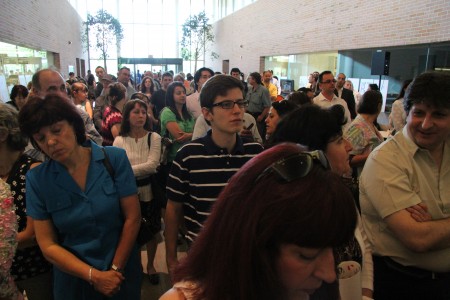 Chicago's Bulgarian community gathered in unison to see the President, and reported that the event's sense of community was what mattered to them.

Regardless of socialist threats some may feel from the past, there are Bulgarians in Chicago who support Obama. Immigration and the economy tend to be top issues for the Bulgarians who vote, leading some immigrants to identify more with Democrats. A portion of the community is illegally in the U.S., and many who are here legally have relatives back in Bulgaria they are trying to bring over. Thus, Obamaâ€™s liberal immigration policies are more appealing. Most recently, Obama proposed a new rule to keep together immigrant families that would allow illegal immigrants with citizen relatives to stay in the U.S. when applying for residency.

Dimitar Dimitarov, an information technology specialist who is currently unemployed and goes to church each week, views Obamaâ€™s healthcare reform as progressive for immigrants, not socialist, and will vote for the incumbent in November.

â€œI like the way he speaks, and I like what he is thinking about the future,â€ Dimitarov says, hesitating before speaking. â€œThe Republican Party is for the rich people, and we are not rich. He is not a socialist. He just wants everyone to have medical insurance.â€

Still, Dimitarov recognizes that he is unusual in his community. Most Bulgarians in Chicago are not following the American Presidential election, and there is no political organization in Chicagoâ€™s Bulgarian community. Moreover, most have stopped following Bulgarian politics.

â€œMost of them are not involved in politics,â€ Dimitarov says of his community. â€œThey donâ€™t see that voting will change anything. In Bulgaria, politics made everything worse and worse. But I am here. I am an American, this is my country and I am no longer interested in what is going on in Bulgaria.â€