Dual citizenship for Lithuanians not for everyone

[A version of this story ran in Lithuanian on the Draugas web site. Read that version here.]

On October 14, AudronÄ— TamulienÄ— will fill out her ballot for the Lithuanian parliamentary elections. Then, on November 6, she will make her way to a polling place and cast her vote for the president of the United States.

Adomas Siudika, however, will be allowed to have his say only in the Lithuanian elections. The difference? TamulienÄ— came to the U.S.before 1990, and is thus eligible by the Lithuanian government for dual citizenship; Siudika came after, and is not. 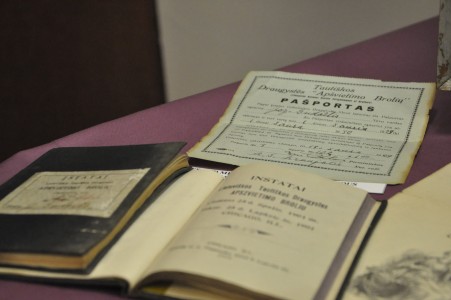 Archived documents from first-wave Lithuanian immigrants that are currently on display at the Lithuanian Research and Studies Center in Chicago. (Photo by Jen Lazuta)

TamulienÄ—, 70, and Siudika, 30, were both born in Lithuania. They have both resettled in the United States and live in the Chicago area. Both are fiercely loyal to their heritage, but have also made lives for themselves as Americans. Both follow politics here and in their home country. Both consider it their duty to vote.

But under the Constitution of the Republic of Lithuania, which was adopted on Oct. 25, 1992, any Lithuanian who acquires citizenship of another state must renounce his or her Lithuanian citizenship.

â€œI know quite a few Lithuanians who had to take citizenship here [in the U.S.] because one of theÂ prerequisitesÂ to apply for the job was to have U.S. citizenship,â€ Siudika says. â€œIt is a hard decision because itâ€™s a decision between your homeland, which in my opinion we got when we were born in Lithuania to our Lithuanian parents and is a birthright, and supporting your family.â€

Siudikaâ€™s friends arenâ€™t alone. According to the latest report by the Migration Department under the Ministry of the Interior of the Republic of Lithuania, 519 Lithuanians lost their citizenship in 2010 because they became a citizen elsewhere. In 2009, this number was slightly higher, at 784.

Perhaps one of the most famous Lithuanian immigrants forced to choose between two citizenships is Valdas Adamkus, former president of Lithuania, from 1998 to 2003 and 2004 to 2009. He emigrated to the U.S. in 1949 and lived here as an American citizen until his retirement in 1997. Adamkus gave up his dual citizenship before he was sworn into office for his first term.

A slight alteration was made to the constitution during Adamkusâ€™s second term, when he signed into effect a law that extended the right to dual citizenship to children of Lithuanian immigrants living in European Union and NATO member states. Subsequent petitions have been made to permit dual citizenship in more cases than is currently allowed, but so far there has been little change. 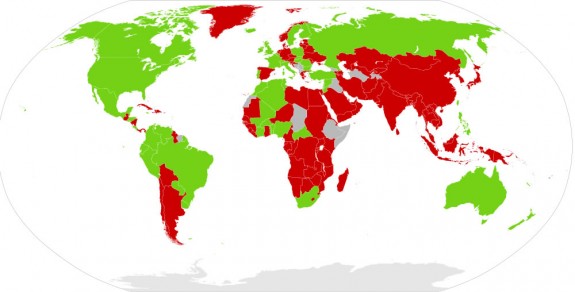 Countries that allow dual citizenship are shown in green, those that do not are shown in red. (Photo courtesy of Wikipedia Commons)

Under article 12 of the constitution, Lithuaniaâ€™s Law of Citizenship allows dual citizenship under exceptional cases. Namely, for those Lithuanians who were forced to emigrate between the Soviet takeover of Lithuania on June 15, 1940, and Lithuaniaâ€™s Independence on March 11, 1990. Such individuals may be granted the right of Lithuanian citizenship, while retaining the second citizenship they acquired during resettlement.

This Constitutional loophole is what allowed TamulienÄ— to obtain her dual citizenship. She fled Lithuania with her parents back in 1951, becoming an American citizen in 1957. Although she has been back to Lithuania only a few times since leaving 61 years ago, she says she still strongly identifies with her homeland.

â€œI wish I could say I was American-Lithuanian,â€ TamulienÄ— says. â€œBut Iâ€™m very much Lithuanian-American.â€

Nonetheless, TamulienÄ— says that many of her friends and family in Lithuania do not think she should vote there.

â€œBut I do anyway because itâ€™s my right and itâ€™s my duty,â€ she says.

As for recent Lithuanian immigrants to the U.S., TamulienÄ— says it doesnâ€™t bother her that they cannot vote in both elections.

â€œI say that not because their rights are taken away, but because they came here for a different reason,â€ she says. â€œWe had to leave. My parents were on a forced deportation list. People who came here since 1990 are just looking for a better life. Itâ€™s a choice they make. We didnâ€™t have that choice.â€

This difference in views between TamulienÄ— and Siudika is representative of a fierce debate among Lithuanians as to who, if anyone, should have the right to dual citizenship. In most cases, the divide is generational, with first-wave refugees believing only those forced to flee the country should retain citizenship in Lithuania when becoming a citizen of another country. Second- and third–wave immigrants say that although their reasons for leaving Lithuania are different from first-wave immigrants, they shouldnâ€™t be forced to choose one country over the other. And then there are those Lithuanians, who never left Lithuania and believe leaving the country for any reason is reason enough to give up the right to vote.

Jurgis Anysas, 72, fled to Canada in 1949 and settled in the United States in 1960. He now holds citizenship in all three countries. Although he no longer exercises his right to vote in Canada, Anysas says he believes the Lithuanian Constitution should be worked out in a way that allows Lithuanians living elsewhere to vote in more than one place.

â€œI, like many, want to have a say in the governance of both countries,â€ he says. â€œWe all value the right to vote there and here, because thereâ€™s always the thinking that [our vote] does mean something.â€

Anysas says he is also concerned about the message the law sends to Lithuanian immigrants.

â€œThereâ€™s a danger that Lithuania will lose its people if [immigrants] canâ€™t vote in both elections,â€ he says. 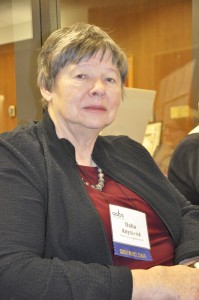 Dalia (Anysiene) Anysas, who has lived in the U.S. since 1949, says that despite concerns over voting in a country she no longer resides in, she vote in both elections. (Photo by Jen Lazuta)

Anysasâ€™s wife, Dalia, 72, has a slightly different concern about the law. She came to the U.S.in 1949 and also holds dual citizenship. For a long time, she believed that she had no right to vote in Lithuania, since she didnâ€™t live there.

â€œI had this moral issue â€“ Do I have a right to vote in a country I donâ€™t live in?â€ she says.

Ultimately, Dalia says, her friends and family convinced her to vote – mostly because they knew she would vote in favor of the â€œrightâ€ candidates and issues.

Seventy-two-year-old Arvydas Tamulis, who came to the U.S. in 1949, sits at his computer most days and reads Lithuanian election news. Like Dalia, Tamulis says he is aware of the implications of voting in a country where you no longer reside, and makes an effort to learn the issues.

This year, all 141 one seats of the Lithuanian parliament, known as Seimas, are up for election. According to the Lithuania Tribune, the latest opinion polls show that the Labor Party is in the lead with 17â€“19 percent of the votes, followed by the Social Democrats, with 15-16 percent of the vote and the Order and Justice party, with 8 percent. This past week, the three parties signed a coalition agreement leading many experts to predict that they will win the majority of seats in October.

Tamulis says he is particularly interested in party stances on dual citizenship, energy supply and attitudes toward removing members known for corruption.

â€œI try to make an informed decision and read Lithuanian newspapers online to know whatâ€™s going on,â€ Tamulis says. â€œThe voting I do affects other people, not me. So I do go back and forth about whether itâ€™s ok or not.â€

Despite his trepidations, Tamulis says it would bother him if he didnâ€™t have the right to vote in both elections. â€œItâ€™s all part of being a citizen,â€ he says. â€œTo me, what voting there [in Lithuania] means is a stronger connection to Lithuania. At times I have abstained, but at other times when I felt a particular issue needed a vote, I voted.â€

Siudika understands why some Lithuanians are skeptical of people living abroad and voting in home-country elections. But he says that the people who vote are most likely to be the onesÂ who keep themselves well informed about the candidates and who they are voting for. Generally it is an informed decision.

As for American politics, Siudika says he wishes he could have a say here as well. â€œI would vote if I could, because I follow political life here and am very up-to-date on Illinois and nationwide politics,â€ he says. â€œBut I would never give up my Lithuanian citizenship to do so. Itâ€™s who I am.â€

It doesnâ€™t seem as if recent Lithuanian immigrants, such as Siudika, will get a chance at dual citizenship anytime soon. â€œChanging the Constitution would be hard,â€ he says. â€œA referendum would be needed. And since Lithuanians donâ€™t usually come out to vote in big numbers, thereâ€™s a big risk it would fail. If you donâ€™t get a certain percentage of voters, the referendum isnâ€™t valid.â€

Even if such a referendum did pass, itâ€™s hard to say how an increase in the number of Lithuanians holding dual citizenship would affect election results. According to the Statistics Division of the United Nations Department of Economic and Social Affairs, very few countries collect data on dual citizenship holders. Outside of Austria, Canada, Greece, Switzerland and a handful of other Eastern European countries, the number of people who hold dual citizenship is unknown.

When it comes to voting patterns, even less is known. AgnÄ— VertelkaitÄ—, officer at the Cultural and Economic Affairs division at the Consulate General of the Republic of Lithuania in Chicago, says no data is kept on how many of the Lithuanians who vote have dual citizenship. â€œAs long as you have a Lithuanian passport, you can vote in [Lithuanian] elections,â€ she says.

VertelkaitÃ© concedes that the voter turnout among Lithuanians is quite low â€“ especially considering how large the local Lithuanian population is. Although there are no official census data on the number of Lithuanians living in the Chicago area, she says that people speculate it is anywhere from 200,000 to 500,000.

According to Consulate voting records, 752 Lithuanian citizens registered to vote in the Oct. 12, 2008, Parliamentary elections. Of that number, 510 actually voted; 83 in person at the Consulate in Chicago and the rest via mail. While these numbers donâ€™t say anything about the number of Lithuanians who would vote if they could, it does show that in Chicago, at least, there are very few Lithuanians living in America who actually exercise their right to vote in Lithuania.

Regardless of how many people actually turn out for elections, though, Siudika believes that all people should have the option of doing so â€“ without having to renounce their Lithuanian citizenship. 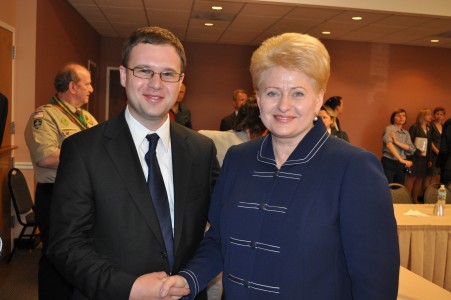 â€œIt doesnâ€™t make sense,â€ he says. â€œOlder people can have this right to vote even though they grew up in America, but for people like me, who lived [in Lithuania] my whole life and speak the language, but now live in America and would like to vote here but canâ€™t without giving up my Lithuanian identity â€“ itâ€™s absolutely absurd. Legally, philosophically. Itâ€™s not acceptable.â€

Siudika said he also doesnâ€™t understand why a country would want to make its own citizens give up their identity. â€œForcing people to renounce [their citizenship] is counter intuitive for such a small nation,â€ he said. â€œIt doesnâ€™t make sense.â€

At the moment, Siudika says, constitutional law experts are trying to find the best way possible to change the current strict dual citizenship doctrine in Lithuania, in order to stop the unnecessary divide on this issue for Lithuanians all around the world and their native county.

â€œSo far, there has been no change,â€ he says. â€œBut I am optimistic for a solution.â€