Emilio and Kale: Two roads out of Cuba 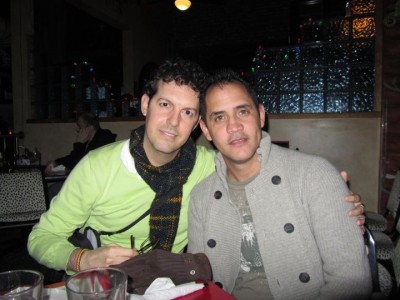 Emilio (right) and Kale (left) in Cuba in 2006. This photo sits on the mantle of their home in Chicago.

Kale pulls a photo off the mantle. It is of him and his partner of fourteen years, Emilio. The photo was taken in a restaurant in Cuba a few years ago. Emilio and Kale are both smiling and Emilio has his arm around Kale in a subtle display of affection. Kale gestures around the room at the
photos of the two of them. Even after a year, he cannot believe it is acceptable to show the photos. In Cuba, charges could be pressed against a person for displaying photos of a homosexual couple.

Kale, 39, and Emilio, 40, have lived together in Chicago for
just over a year. Both have requested that their last names be withheld to protect Emilio who is still seeking paper work to visit Cuba. Before moving to the United States, the couple lived together in Havana, Cuba, for eight years. There Emilio was a doctor and Kale was a computer engineer.

In 2006, Emilio was asked by the Cuban government to join the Cuban Medical Brigade. That meant he would need to leave Kale behind and with 192 other brigade members, he moved to Ghana. With the move came a sustained period of uncertainty and separation that would span three countries and five-and-a-half years until their reunion in Chicago.

Emilio describes the experience of working in Ghana with the brigade as unbearable.

“They were always watching, every moment and movement,â€ Emilio recalls, â€œYou were unable to talk freely in any situation.”

While the Cuban Medical Brigade is often seen as a paragon of Cuban humanitarian work, Emilio remembers the experience as controlled and contrived.

â€œEvery day was the same thing. The authorities would take us out to towns with a team of five or six other doctors and we worked for many, many hours.â€ Emilio remembers. â€œThen at the end of the day we were driven back to the base camp. The whole time they were there; waiting, watching.â€

While Emilio enjoyed his work helping people, he felt like every day the control of the Cuban authorities tightened and his personal freedoms were limited. Emilio decided to risk his freedom and leave Ghana for the chance at a more free life.

Escaping to freedom and complications

It was a warm night in Accra and Emilio clutched his backpack tightly. It was all he was able to bring with him. The Cuban authorities still had his passport (all passports are taken from doctors in the brigade as a security measure). Emilio huddled in the back of a car, as he snuck away from the brigade. His mind raced as he thought not only of himself, but of Kale and his family. He had heard whether or not a person gets caught sneaking away, repercussions can be taken against the family.

Emilio sought assistance at the US embassy in Accra. While waiting on word for paperwork, Emilio took refuge in the basement of a nearby hotel. Hiding from Cuban authorities, Emilio walked back to the embassy almost every day. Each day he feared discovery and the punishment that comes with fleeing the brigade. After a month of living in secrecy, Emilio was able to secure the documents that would allow him to seek asylum in the United States.

On a frigid December night, Emilio landed in Baltimore. He spoke no English and upon arrival asked about aid organizations. Whether he qualified for relief or not, none of the organizations were open at 11 at night and he was on his own in the snowy city without a coat. Emilio had only one friend in the entirety of the United States. That friend lived in Chicago. Emilio decided to call his friend and ask for help. The friend secured him a flight to Chicago and at 6 in the morning, Emilio finally arrived in the Windy City.

Emilio felt exhausted physically and emotionally. He explains nothing compares to the feeling of emptiness he experienced those first few weeks in Chicago.

[audio:https://immigrantconnect.medill.northwestern.edu/wp-content/uploads/2012/05/First-Day-in-Chicago-cut-Emilio1.mp3] Listen to Emilio talk about his first day in Chicago

Alone without his family or partner, Emilio worked five jobs and tried to make ends meet. 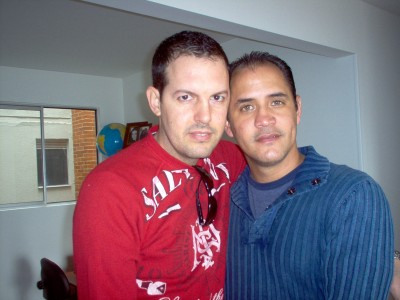 Emilio and Kale together in Columbia.

Long distance phone calls and periodic emails quickly became too little for the couple. They evaluated their choices. Emilio could not return to Cuba as he is labeled a traitor to his country for abandoning the brigade. Emilio had a sister who lived in Columbia, and he and Kale decided moving to Columbia to live with her would be their best opportunity to be together. It was easier for Kale to obtain permission to come to Columbia than permission to come to the United States.

The process of getting permission to move was not as easy for Emilio. The simple mistake of one number in his I-94 (required arrival) form caused him to wait six months to receive paperwork that took others two. Eventually in 2009, Emilio was granted permission to travel to Columbia.

Unfortunately, Kale and Emilio found Columbia unwelcoming to homosexuals and within six months of living there they knew they wanted to move to the United States.

â€œLike many other Latin American countries, Columbia is backwards,â€ says Kale. â€œEmilio and I wanted a life like his in the United States, where we could live together without judgment.â€ 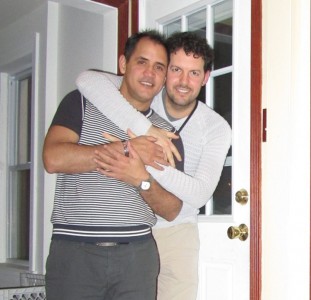 Emilio and Kale in Chicago shorly after Kale's arrival.

Emilio returned to the United States several months before Kale. He cannot practice medicine in the United States, but has found he enjoys teaching just as much. He took a job at Harold Washington College teaching pre-medicine classes. When Kale finally arrived, he found Emilio established and thriving. Emilioâ€™s success gave Kale privileges not allowed to many refugees. He was able to take six months to learn English and adjust to the
culture, a skill he credits for much of his success. Kale joined Emilio at Harold Washington, accepting a job tutoring computer engineering.

Now that they are settled and happy, Emilio and Kale often reflect on the differences in their new life. Emilio and Kale struggled to express themselves and be open in Cuba. Emilio recalls an incident in Cuba in which a policeman accused the couple of making a public display.

[audio:https://immigrantconnect.medill.northwestern.edu/wp-content/uploads/2012/05/On-Being-Throw-out-of-the-Beach-cut-Emilio1.mp3] Listen to Emilio talk about being kicked off the beach

Emilio and Kale both know people who lost their jobs and homes simply because they were gay. They remember several experiences in which they had to lie about their relationship in order to avoid persecution.

Emilio says the situation in Cuba has gotten better with time, but it is still difficult to be openly gay in Cuba.

“In Cuba everything is dependent on how the government views you.â€ he says. â€œThe best jobs are given to those who conform to what the royal [Castro] family wants.â€

When a person applies for a job, the first step taken by the government is to interview the personâ€™s neighbors. This means the ability to get a job or travel can be determined by one nosy neighbor’s opinion. Emilio recalls how it felt to have the government always listening.

[audio:https://immigrantconnect.medill.northwestern.edu/wp-content/uploads/2012/05/On-Being-Listened-to-in-Cuba-cut-Emilio1.mp3] Listen to Emilio talk about always being watched in Cuba

Kale and Emilio hope to visit Cuba someday.Â The last time Emilio as there was in 2006 but unfortunately he was still struggling with paper work.Â He has already been denied once, but hopes to try again soon. 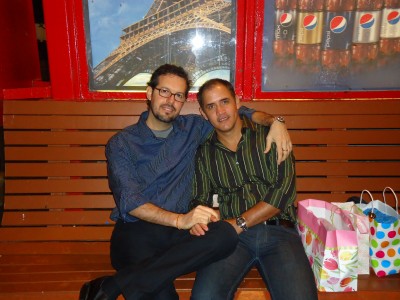 Kale and Emilio find life in Chicago much more accepting and expressive. They see Chicago as a whole new world where they can be open, and diversity in the city is much more rich and ingrained.Â He loves the collection of ethnicities and the cultures people bring with them.

“In Cuba, everyone is Cuban,â€ Kale says. â€œIn the United States this is not true.”

For now, they are content, surrounded by smiling photos and each other.