Emmanuel Eklou: Togo didn’t prepare him to be a dad

On a Sunday afternoon in April, Emmanuel Eklou stops at McDonaldâ€™s for lunch with his 12-year-old daughter, Vanessa, and 10-year-old son, 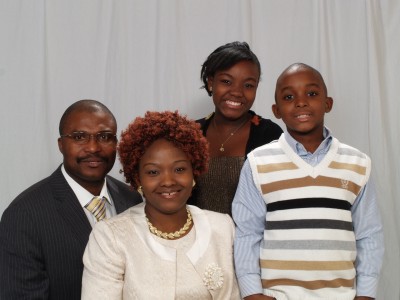 Emmanuel Eklou poses with his wife, Amevi, daughter, Vanessa, and son, Ange, for a family portrait earlier this year. "My family, they are the most important thing to me," Eklou says.

Ange. Theyâ€™ve just spent the morning together at church. Later, theyâ€™ll head to a birthday party for a family friend. To many, it would appear to be an unremarkable day; just a dad enjoying time with his kids, while his wife is at work. But for Eklou, a 47-year-old refugee from the West African nation of Togo, being a hands-on father is anything but ordinary.

â€œOur dads, they were not that much involved,â€ Eklou says. â€œBut here, every single day, I have to be with [my children]. Every weekend I have to play with them.â€

Being an involved father is a role that Eklou says he now cherishes. But it is a role he never could have imagined for himself.

[audio:https://immigrantconnect.medill.northwestern.edu/wp-content/uploads/2012/05/NeverWouldveThought1.mp3]Â Eklou reflects on how his role as a father now is different

Born and raised in the village of KpelÃ©-Tsiko, Eklou grew up in a culture in which only the women were responsible for child rearing and household chores.

â€œMy dad, he was just there to punish all my mistakes,â€ Eklou says. â€œHe was never there to appreciate whatever Iâ€™m doing. Not to say â€˜good job.â€™â€

As Eklou recalls, the first time his father ever acknowledged an accomplishment was when Eklou earned his BEPC, the diploma that allows students to go on to high school-level classes. He was one of just three people in his village to earn the honor.

Eklou says he didnâ€™t think it was strange that he and his dad never played games together, that his dad never helped him with his schoolwork, or that they never had meaningful conversations.

It wasnâ€™t until Eklou attended college in the capital city, LomÃ©, that he got a glimpse at another type of fatherhood.

[audio:https://immigrantconnect.medill.northwestern.edu/wp-content/uploads/2012/05/1stParentingLesson.mp3|titles=1stParentingLesson]Â Eklou talks about the first time he saw a dad in Togo take care of his kids

It was this experience that Eklou kept in mind when circumstances forced him and his wife, Amevi, to flee to the United States in 2004. Unlike in Togo, where mothers get constant help from friends and family, Amevi was now on her own with two young children. With no one else to turn to, Eklou had to reshape his concept of parenting.

â€œIt was hard at first,â€ he says. â€œYou only really know this one thing and so I needed to learn [how to be a dad] from here.â€

Although the transition wasnâ€™t always smooth, Eklou says Amevi helped him into the role of doting father and husband.

â€œShe went easy on me because she knows how it is in Africa. Even now, she tries not to put too much pressure on me,â€ he says. â€œBut I do as much as I can.â€

[audio:https://immigrantconnect.medill.northwestern.edu/wp-content/uploads/2012/05/WomensWork1.mp3|titles=WomensWork1]Â Eklou explains the difference between American and Togolese housework

Now, in addition to his full-time job as a statistician at the American College of Surgeons, it is Eklou who cleans the house, does the laundry and goes shopping. As for making dinner, he still leaves that to his wife.

â€œMy kids, they donâ€™t like my cooking so I stopped,â€ he says, laughing. â€œBut I try to help in the kitchen when I can.â€

Eklou says he doesnâ€™t mind such tasks, especially because he knows itâ€™s a big help to his wife and children.

â€œAs a boy I was always doing chores,â€ he says. â€œChores, then school, then more chores. It wasnâ€™t easy.â€

[audio:https://immigrantconnect.medill.northwestern.edu/wp-content/uploads/2012/05/ChoresAsBoy.mp3|titles=ChoresAsBoy]Â Eklou describes his daily routine as a boy, fetching water in Togo

Remembering how difficult this was, Eklou likes to help out his kids as much as possible. In return, he asks only that they keep their rooms clean and study hard. Like many children, though, Eklou says Vanessa and Ange find this hard to do.

â€œThey are not listening to me all that much,â€ he says. â€œI ask them just for this one thing to do, but even that they find hard.â€

Eklou describes his childrenâ€™s disobedience good-naturedly, but says that discipline can be difficult at times. Unlike in Africa, where children quickly learn their lesson after being beaten or whipped as punishment, Eklou must teach his kids to listen by taking away privileges.

â€œSometimes my son, he is so bad,â€ Eklou says. â€œHe wonâ€™t do his homework or clean up his room. I donâ€™t know what to do sometimes so I take away his games. I have to tell him he canâ€™t watch TV.â€

Itâ€™s a punishment that may not be as effective as what Eklou experienced as a boy, but itâ€™s one Eklou can administer without regrets â€“ especially because he still finds it difficult to say he’s sorry to his children.

â€œMy dad, he never apologized for anything,â€ he says. â€œSo itâ€™s sometimes hard for me to admit when Iâ€™m wrong.â€

Preserving Togolese culture for his kids is another ongoing struggle. Despite his best efforts, Vanessa and Ange, who have not been back to Togo since they left as toddlers, have grown up American. They listen to American music, wear American clothes, watch American TV and speak perfect, American English. They say they have little desire to visit Togo or to get to know their homeland.

But no matter what their interests may be, Eklou says he always makes sure to support his children.

â€œItâ€™s important they know that I love them and appreciate what they do and who they are,â€ he says.

As a result, the Eklous have become very close as a family. Eklou says his children â€“ Vanessa especially â€“ confide in him, and have an open and honest relationship with one another.

In Togo, Eklou says he never would have given his kids advice or encouraged affection. He never would have gotten them dressed in the morning, walked them to school or picked them up in the afternoon. He says they also never would have had family meals together with his wife and daughter, since it is customary throughout much of western Africa for men and women to eat separately.

â€œI think [my kids] really love it,â€ he says, of his involvement in their lives.

It makes Eklou happy as well.

[audio:https://immigrantconnect.medill.northwestern.edu/wp-content/uploads/2012/05/Pride.mp3|titles=Pride]Â Eklou talks about the pride he takes in his childrenâ€™s successes

One of Eklouâ€™s favorite moments with his kids is when they play a calculating game he created, in which they give each other math tricks.

While Eklou says he doesnâ€™t like TV, he often watches it with Vanessa because he knows she enjoys it. He and his children like to play Nintendo Wii in the evenings, as well as to play cards and do sports together.

â€œBack home, I never could have played with them like I do here,â€ he says. â€œMy son, he likes running and he is happy whenever he beats me. Sometimes I let him win just to be happy.â€

When asked about the memories he has of his own dad, Eklou says: â€œAll those whips on my back.â€

As for happy memories, he pauses; thinks. â€œI donâ€™t even know,â€ he says, finally.

Eklou does recall how hard his father pushed him to get a good education. Very few village kids ever complete their education; most just follow their parents into the farming life, Eklou explains. But his dadâ€™s threats of punishment for poor grades, really made him study hard. 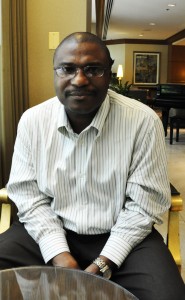 Eklou went on to study at The University of LomÃ©, where he earned a degree in accounting and finance. He later worked his way up to being an administrative and financial manager, a position of prestige in Togo. Eklou has continued his studies in the U.S. He attended ESL classes to improve his English, and earned his Masterâ€™s degree in statistics from Loyola University Chicago in 2010.

Eklou says his main priority now is making sure his kids also have the opportunity for a good, proper education. He says heâ€™s always working to make sure they are on the right track and have resources to go to college.

â€œLeaving Togo behind wasnâ€™t easy, but we are here and we saved our lives and now we are focusing on putting our kids in front,â€ he says. â€œWhatever we are doing, we are doing it for them.â€

Eklou says he is excited about his childrenâ€™s future. Although Ange is constantly changing his mind about what he wants to do when he grows up, Vanessa says she wants to be a mission doctor or a lawyer â€“ both professions which would make Eklou very happy.

No matter what profession his kids choose, Eklou says he will always be proud of them. In the meantime, he will continue being as supportive and as involved in their lives as he can.

â€œI have a long way to go, but I think they would say I am a good dad,â€ he says. â€œI know I still have room to improve, but Iâ€™m doing well. Iâ€™m getting there.â€