[A version of this story ran in Pinoy Newsmagazine. Read that version here.]

Jessica Oâ€™Brien prepared herself for the worst.

She didnâ€™t plan a party for March 20, 2012, because she wasnâ€™t sure if she was going to win the Democratic Cook County Circuit Court primary election for the vacancy of Henry Simmons Jr.

â€œI didnâ€™t have any expectations,â€ said Oâ€™Brien, who admits that sheâ€™s so competitive that family games of volleyball get heated. â€œI ran as if I was losing every single day.â€

At 7:30 P.M., a half hour after the polling places closed, she received her first congratulatory phone call from Justice Nathaniel House. She was so far ahead in the polls House believed no one would catch her. It wasnâ€™t real for Oâ€™Brien yet.

Her attitude was, â€œIâ€™m not going to believe you until the fat lady sings,â€ she said.

Even after all of the votes were tallied the next morning, Oâ€™Brien refused to believe she had received the Democratic Party nomination. She couldnâ€™t be 100 percent sure until she received a letter from the political party in the mail 49 days later.

It was finally real for her. â€œToday, to me, itâ€™s official,â€ Oâ€™Brien said the day she received the letter. â€œItâ€™s still not sinking in.â€

For Oâ€™Brien to win her partyâ€™s nomination she overcame more than opposing candidates Michael Forti and James Wright. Law is the Filipino immigrantâ€™s second career, something that had always interested her, but a field she wasnâ€™t sure she had the foundation to pursue.

Historically Filipino-Americans are less politically active than other immigrant groups in Chicago. Experts have pointed to corrupt politics in the Philippines and a colonial mentality that remains in the psychological mindset of Filipino immigrants when they arrive in the United States. Filipino Americans who choose to run for public office tend to be second-generation immigrants. 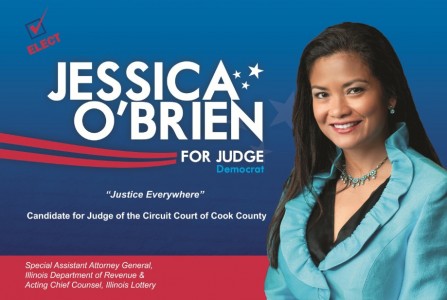 Some members of the Democratic party advised Jessica O'Brien not to include her photo on her campaign posters.

Oâ€™Brien is an anomaly not only in the Filipino community, but in the Asian-American community as a whole. According to the United States Census Bureau, Asian-Americans represented 6.2 percent of Cook Countyâ€™s population in 2010. Of the 400 Circuit Court Judges only nine (or 2.25 percent of the circuit court) are of Asian-American descent.

The lack of Asian-American representation is likely why Oâ€™Brien was advised by members of the Democratic Party to leave her photo off all her campaign material. Her ethnic background could potentially cancel out any bump sheâ€™d get for being a female candidate with an Irish last name, according to a party official Oâ€™Brien chose not to name. However, Oâ€™Brien decided that a smile would help gain voters trust and ignored the advice.

Jessica O'Brien poses with her husband Brendan and daughters (from left to right) Judy, Samantha and Vanessa.

â€œI want people to know Iâ€™m Filipino but really it shouldnâ€™t even be a factor,â€ she said. â€œI mean look at my credentials.â€

She wasnâ€™t talking about marrying Brendan Oâ€™Brien when she was involved in the hospitality business â€“ long before she knew sheâ€™d be running for a spot on the Cook County Circuit Court, but rather her awards from the Asian American Bar Association and Womenâ€™s Bar Association of Illinois.

â€œRace is secondary to me. Qualifications are always first,â€ she said. â€œItâ€™s good that minorities are involved, but they have to be qualified.â€

Other Filipino politicians in the Chicago area – such as Florencio Villegas, aÂ Bloomingdale Township committeeman and Jerry Clarito, Vice President of the Board of Directors of the Skokie Park District – believe the low number of Filipino representatives in the Chicago area is due in large part to lack of political participation from the Filipino community as a whole.

Villegas and Clarito point to two main causes of political apathy in their community. First, politics in the Philippines is associated with buying votes and violent elections. Itâ€™s dangerous to be politically active there.

â€œPolitics in the Philippines is not encouraging, to say a mild word,â€ said Clarito, who as a dual citizen has been politically active in both the Philippines and the United States. He opposed the U.S. support of Filipino dictator Ferdinand Marcos and met with U.S. congressmen to get the Filipino Veterans Equity Compensation Act, which gave financial compensation to Filipinos who were a part of the Bataan death march, passed.

Second, a colonial mentality is often mentioned as a contributing factor to low political participation. The Philippines was a colony of Spain for nearly 350 years from 1521-1898 and a U.S. colony from 1898-1946.

Kevin Nadal, a psychology professor at the John Jay College of Criminal Justice in New York City, has studied this colonial mentality extensively. In 2009 he published Filipino American Psychology: A Handbook of Theory, Research and Clinical Practice. Nadal believes that the effects of being a colonized people for such an extended period of time has made most Filipino immigrants feel inferior to U.S. citizens born in the United States. 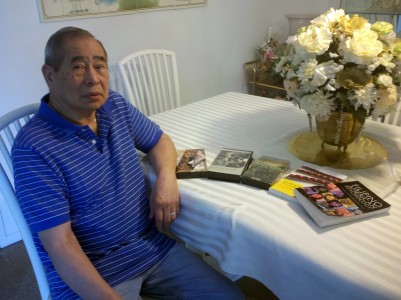 Florencio Villegas sits in his kitchen with various films and books he has used to educate himself about Filipinos' colonial history. The far right book is Kevin Nadal's Filipino American Psychology.

His 308-page book is in Villegasâ€™ living room. The 79 year old believes the best way to address both causes of Filipino voter apathy is to teach immigrants Filipino history without a U.S. slant to allow future generations to become more politically active.

â€œIâ€™m almost embarrassed to address the issues because Filipinos, my generation anyway, arenâ€™t going to be involved,â€ said Villegas.

The Alliance of Filipinos for Immigrant Rights and EmpowermentÂ  (AFIRE) is also dedicated to educating Filipinos about their colonial history and the importance of political participation.

The organization is part of the New Americans Initiative, a statewide program that focuses on easing the way for legal residents to become citizens when they are eligible. Ninety-two percent of Filipinos who immigrated to the United States from 1970-1979 became citizens, according to AFIRE. However every decade since, the number has declined. Only 12 percent of Filipinos who came to America from 2000-2009 are U.S. citizens. 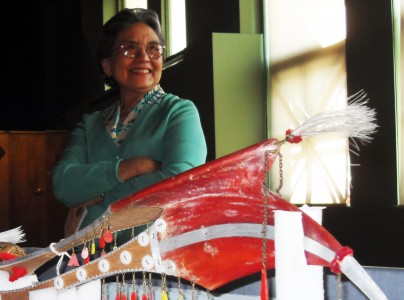 Juanita Salvador-Burris poses with Filipino artifacts at the Field Museum in Chicago.

AFIRE president Juanita Salvador-Burris says that the organization is already seeing improvement on these numbers because of their work with the New Americans Initiative.

The aim is to get more Filipinos registered to vote, and create a more politically educated base of Filipinos, which can influence lawmakers â€“ something that the Filipino community has not done historically in the United States.

That doesnâ€™t apply to Jessica Oâ€™Brien. After winning the Democratic primary she is now basically a shoe-in for the Cook County Circuit Court.