Memories of corruption and the Machine stunt Latino vote

[A version of this story ran in Extra: Two Languages Una Voz. Read that version here.]

Come November, Javier YaÃ±ez will be the perfect example of the most coveted man for American politicians. But, he is also an anomaly. The young Pilsen native is Latino and also, contrary to so many in his neighborhood and city, politically active.

Voter apathy among eligible Latino voters is staggering. In Chicago, wards with high Latino populations often have some of the lowest voter turnouts citywide. A number of obvious factors contribute to this. Immigrants work long days, sometimes at more than one job, and the hours the polls are open are not accommodating. But, YaÃ±ez says, this does not account for all the apathy.

Underneath the hectic work-schedules and struggles of all minority communities is a severe distrust in the American electoral system. YaÃ±ez, who has campaigned for 25th Ward Alderman Danny SolÃ­s and knows other Latino Aldermen such as Ricardo MuÃ±oz well, has heard this many times. It stems from a combination of the corruption back home and disenchantment with the perceived â€œpolitical machineâ€ in Chicago.

Many in the media have deemed â€œLatino Voteâ€ as the key to the 2012 presidential election. The New York Times, Huffington Post, The Atlantic and NPR have all run pieces predicting who will nab the Latino vote. TIME magazine ran a cover story March 5, titled â€œYo Decido,â€ proclaiming that Latinos voters will decide the election in November.

None of this matters much if Latinos in Chicago donâ€™t go to the polls. Totaling only 13,134 registered voters, the 12th Ward holds the lowest number of registrations of any ward in the city. The 22ndWard, also overwhelmingly Hispanic, follows in third with 14,961 registered voters. 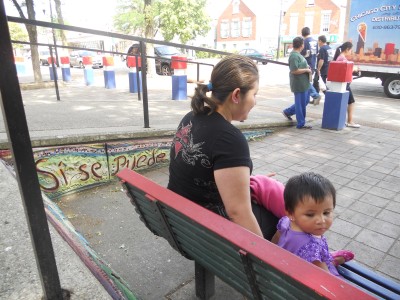 A woman and child sit at Manuel Perez Jr. Plaza in Chicago's Litttle Village neighborhood, located in the 22nd Ward. Resplendent in red, white and blue, the park also has an understated mural, saying,â€œSÃ­, se puede,â€ (yes, we can).

Some of this civic inactivity can be explained away with immigration patterns. With high Latino populations comes high numbers of non-naturalized citizens.

However, the numbers are most telling when participation numbers are compared to those who can vote, but choose not to do so.

In the November 2010 general elections, despite the number of important offices at stake such as governor, senator and a number of House of Representative seats, voter turnout among registered voters in the 12th and 22nd Wards each hovered just under 33 percent, well below the Chicago-wide average of 52.9 percent for the contest, according to the Board of Election Commissioners for the City of Chicago.

Xochitl Bada, Professor in the Latin American and Latino Studies Program at the University of Illinois at Chicago, suspects that voter apathy comes from both political failings in immigrantsâ€™ home countries and holes in the American electoral system.

â€œThe vast majority of Mexican immigrants came before Mexicoâ€™s transition to democracy,â€ he wrote in an email, citing the 2000 end of the Institutional Revolutionist Party and what he called a â€œperfect dictatorship,â€ a term first used by writer Mario Vargas Llosa.

â€œThey entered the U.S. disenchanted with Mexicoâ€™s lack of democratic elections,â€ he said, estimating that eight million immigrants nationwide came to the U.S. before 2000.

Javier YaÃ±ez has seen this trend first-hand while working on election campaigns in Pilsen and other Chicago neighborhoods.

He began his involvement with Chicago politics four years ago when campaigning for Alderman SolÃ­s, and for the first time, saw the ins and outs of local politics in the Windy City.

What he found was the immense difficulty in getting eligible voters in the 25th Ward to cast a ballot. YaÃ±ez and others on the campaign passed out questionnaires asking what factors would get people to vote. They knocked on door after door, hoping to make a dent in peopleâ€™s opinions and convince them to vote. They even offered to pick people up on Election Day or the option of absentee ballots.

Despite their efforts, members of SolÃ­sâ€™s campaign saw little improvement in raw numbers.

â€œWe were doing everything in our power and we found it was very difficult to even believe they were going to vote,â€ he said. â€œNone of the old methods of encouragement are working anymore.â€

YaÃ±ez found himself wondering how to make people care. He and friend RubÃ©n Franco, a senior at De Paul studying Anthropology and Latino Studies who has worked with the local community organization Pilsen Alliance, often discuss how to get people to invest in about elections.

YaÃ±ez and Franco have a friendly banter that appears to happen often. They discuss trends and habits of Chicago Latino voters, but are careful to not oversimplify the problem, as they say so many do.

â€œPolitics is ultimately a numbers game,â€ Franco said. â€œThe easiest way to read numbers is to put people in boxesâ€¦not every Latino can check a box.â€

They explain there is no one Latino vote. What matters to Latinos in Chicago varies by their country of origin, amount of time in the country, personal history and financial status. This said, overarching themes such as immigration concerns, jobs and affordable housing weigh heavily on most Latino votersâ€™ minds. Another uniting factor is their shared history in Latin America and language, which YaÃ±ez says plays into feelings toward politics here and in their home countries.

â€œIn the Latino community, no one has ever seen a type of representation where the people are put first,â€ YaÃ±ez said.

â€œBack in Mexico for example, anyone will tell you the elections are rigged. They always have been rigged and the people donâ€™t believe in the government,â€ he continued. â€œThen they come over here, thinking the same thing.â€

Franco agrees, adding the long history of distrust of the government in their home countries contributes to some immigrantsâ€™ decisions to come to the U.S. in the first place.

â€œThese are communities of people who leave their countries because there is no option for them,â€ Franco said. â€œIt leads to cynicism locally here in Pilsen and national, presidential elections too.â€

“The Machine is going to win”

YaÃ±ez believes that a combination of this feeling and a lack of understanding of the electoral system create the apathy found in Chicago. He says although local elections are direct elections, many Latinos feel the cityâ€™s government canâ€™t work for them.

â€œPeople say â€˜the machine is going to win.â€™ They donâ€™t even bother,â€ he said. â€œThe majority automatically believe that they are part of the system, that they are just puppets.â€

â€œItâ€™s here [in Chicago]. You can ask anybody, â€˜What do you think of your Alderman?â€™ and they say he might get things done, but not for the interest of the people, he just says whatever the mayor says.â€™â€ 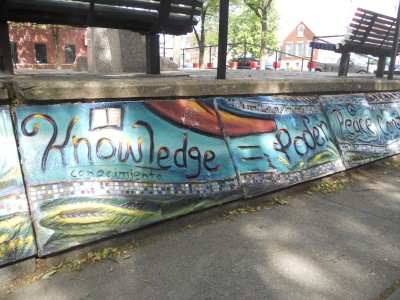 Phrases such as this decorate most of Manuel Perez Jr. Plaza, which sits blocks from Alderman MuÃ±oz's office in the 22nd Ward.

For those who are so invested in the potential of local politics, this lack of engagement is disheartening. YaÃ±ez laughs, but explains with a hint of exasperation that his sister is one of the thousands in the area who has no desire to vote.

Chicago cab driver Vicente IÃ±iguez Jr. feels much of the same frustration. His brother, Jesse, ran for Alderman in the 12th Ward in 2011. He lost to incumbent George Cardenas, but what Vicente found most shocking was ambivalence to the elections, even among people he knew. Friends would ask how his brother did in the race, but when Vicente would ask whether they voted, many said their vote didnâ€™t matter.

With the 2012 elections five months away, the desire to figure out how to get the Latino vote will only intensify. Although they admit they donâ€™t have a perfect solution, YaÃ±ez and Franco both say representation and an increase in faith in elected officials is the key to raising turnout rates.

â€œThere are enormous structures that canâ€™t change overnight, so how do you get people to come out to vote?â€ Franco said. â€œYou have to have more than photo ops and farmersâ€™ markets.â€

Recent actions by the city have not helped Latinosâ€™ confidence in the government, YaÃ±ez explains.

â€œWe have a perfect example with the redistricting. So many huge Latino communities were not represented,â€ YaÃ±ez said, citing a January 2012 vote to redraw the cityâ€™s ward boundaries. Latinos did not pick up any new wards, despite many objections by activist groups hoping to increase representation.

â€œWithout representation, no one is going to believe in politics,â€ he said.

â€œWhy would people vote, especially with local government, for a person that is not going to understand the needs of your community. Why bother?â€