Indian Americans shift party allegiance and take their money with them

[A version of this story ran in the India Tribune. Read that version here.]

When Sampal Shivangi met President George W. Bush in Jackson, Miss. in 2002, he knew the $12,500 he contributed to Bushâ€™s campaign had resulted in a personally satisfying Republican presidency.

Looking back, Shivangi recalls that Bush had been in Mississippi that weekend to support Gov. Haley Barbourâ€™s campaign, and he had received the opportunity to speak with the president personally on issues important to him as a Republican, as a physician and as an Indian American.

Shivangi told Bush that it was important to international relations between the two countries he considers home to lift nuclear power sanctions against India as well as increase work permits for Indians in professional fields to find employment in America. He also mentioned that Diwali should be made an official holiday in the U.S., like other multicultural holidays celebrated widely by ethnic minorities, such as Hanukkah and Kwanza. The following year, Shivangi remembers, Bush held a Diwali celebration at the White House.

â€œ(Bush) was very much willing to go and support us,â€ Shivangi says. â€œWhatever he promised, he kept it. (The nuclear treaty) was the biggest contribution President Bush did for India. If he ever ran for office in India, he would win.â€

As an Indian American with great interest in the politics of his home country as well as the United States, Shivangi says the moment in 2006 when Bush signed legislation allowing nuclear cooperation with India felt like a personal triumph. He lists it as one of the most significant American-Indian policies to emerge in recent memory, for which Bush remains a popular American politician among Indians abroad who believe nuclear energy is the answer to becoming independent of the oil trade headed by their non-democratic Arab neighbors.

Shivangi is an example of two political trends gaining traction among Indian Americans nationally. They are experiencing a shift in party allegiance from Democrats to Republicans and exerting political influence through fundraising.

Indians donâ€™t comprise a large percentage of the U.S. population â€” about 2 percent according to the U.S. Census Bureau â€” and that limits their political clout as an immigrant constituency. However, the U.S. Census also lists Asian Indians as one of the wealthiest minority groups, which makes them powerful campaign financiers.

Thomas Abraham, former president of the Global Organization for People of Indian Origin, says younger generations of Indian Americans are becoming increasingly involved in the political process. That interest in politics coupled with high education and income makes their participation more effective, he says.

â€œNow that (Indians) have settled well, they are getting into the political process,â€ Abraham says. â€œThey are slowly getting into the voting parties, both the Republican and the Democratic party. And one reason for that is that India is the largest democracy in the world, so many people have that democratic principle and values in them.â€

Abraham adds that India, unlike many other Asian countries, has an established democratic tradition that could make it easier for Indian Americans to participate in Americaâ€™s similar political system. There are currently two U.S. governors of Indian origin in office: Republicans Bobby Jindal of Louisiana and Nikki Haley of South Carolina, both of whom have been considered for higher office as potential running mates for Mitt Romney.

The majority of Indian Americans remain Democrats, however, despite growing numbers of Republicans. That historical party allegiance is due to Indiansâ€™ solidarity with other immigrant groups on issues of immigration, Abraham says.

â€œI would say the majority (of Indians are) still Democrat, but Republicans are a good size amount,â€ he said. â€œI would say more 60 for Democrats and 40 for Republicans. I see more people moving toward Republican.â€

As for key issues that are likely to sway Indian American voters during the presidential election, immigration 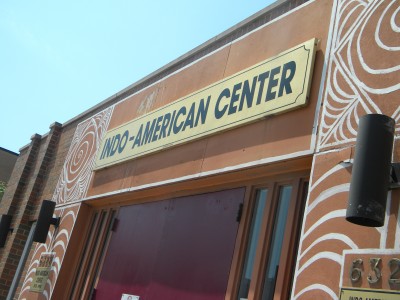 ranks high on the list. Regarding immigration policy, Jay Luthra, executive director of the Indo-American Center in Chicago’s Rogers Park community, says the ways in which the 2012 presidential candidates approach reform could have a significant effect on whether they are able to garner the support of the Indian community.

â€œImmigrationâ€¦ is where any person can make the most impact,â€ Luthra says of the presidential candidates. â€œ(The DREAM Act) is one (bill) on the federal level that could be very helpful to the community. The other one is the Comprehensive Immigration Reform. So that has been introduced many times and has gone nowhere. The leadership by the president could be helpful in those areas.â€ 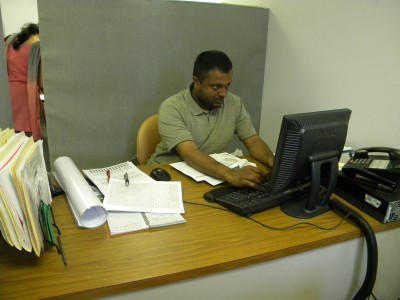 Sam Varghese at the Indo-American Center

While the Indo-American Center is non-partisan, it is invested in helping immigrants understand American politics and the voting process. Sam Varghese, a social anthropologist, teaches classes about the voting process at the center, but he notes that many of his students are not citizens.

The Indo-American Center hosts civic engagement classes that teach South Asian immigrants about the process of acquiring citizenship. Immigrants of a variety of ages sit together at desks, their attention directed to the television at the front of the class. On the screen, a woman speaks with a calm, slow voice. She is giving examples of the types of questions that will be asked when the students take their citizenship test. The speaker asks questions such as â€œAre you married?â€ and â€œWhen was the last time you left the United States?â€ At every question most of the students murmured a small response.

At the back of the room sits Serena Bitla, a psychology major at Northeastern Illinois University. Bitla moved to the United States in 2002 and has just started the process to attain citizenship. Bitla admits that she does not understand the rules and formalities regarding politics, but she says that her father is interested in politics and watches political debates.

Nonetheless, there is one area Bitla is invested in for the upcoming election season.

â€œI would say jobs,â€ she says. â€œRight now itâ€™s kind of tight because of the recession and plus for many of the students, in psychology for example, there are jobs, but I want to know how many jobs and that Iâ€™m secure in my career.â€

Yet as Indian Americans become more established in the U.S. and receive increasingly higher incomes, many are discovering that their political interests no longer align with that of most other immigrant groups. Since the U.S. has been actively seeking Indian immigrants of professional backgrounds in the science and technology industries, and because many Indians invested in successful Silicon Valley enterprises in the 1980s, Shivangi says the leaders within the Indian community are engineers, lawyers and in particular physicians who may feel at odds with some of President Barack Obamaâ€™s policies over the last four years.

Shivangi says although Romney, like Obama, has dabbled in universal healthcare, he trusts the Republican presidential candidate to have â€œlearned what mistakes he made with Romneycare.â€

â€œHe seemed to be a very good man,â€ Shivangi says of the time he met Romney while he was campaigning in Minneapolis. â€œI think he has a strong financial background and good government experience. I think he will do very well.â€

On the other hand, Indian professionals are widespread, not all are buying into the shift in party allegiance. Padma Rao, a physician and professor of Northwestern Universityâ€™s Feinberg School of Medicine, says it is more important to her to vote based on individual issues rather than along party lines.

â€œGiven the difficulties that Iâ€™ve had with this town (Evanston) that is under the control of one party, the one party control system doesnâ€™t work well,â€ Rao says. â€œThere are no checks and balances. That being said, when I vote I decide based on candidatesâ€™ positions on various issues because there are good qualities and bad qualities in just about any party or any candidate.â€

As a longtime Evanston, Ill., resident, Rao and her mother B.K. Rao, are frequent participants in local politics. Every week for a year, they spoke during the citizen comment portion of the Evanston City Council meetings in protest of the cutting of trees as well as an aldermanâ€™s alleged conflict of interest in large-scale development projects.

Rao says even though she feels obligated to speak up to local officials regarding issues that affect her personally, she has only recently become more involved in the political process nationwide. Prior to the adoption of early voting days and absentee ballots, she says it was difficult as a physician to visit the polling place on days when she worked at the hospital. However, as a physician as well as a constitutionally aware citizen, she says she is not a fan of the Affordable Care Act currently being deliberated by the U.S. Supreme Court.

â€œOne of the fundamental problems is, doesnâ€™t Obamacare force you to have health insurance, otherwise you have to pay a penalty for not participating?â€ Rao says. â€œIsnâ€™t that forcing you to enter into contract to switch from one method or system to another? That doesnâ€™t really seem constitutional to me.â€

Regardless of partisan loyalties, the politically active within the Indian community at large agree that taking political action is far preferable to apathy. Luthra says the Indo-American Center employs a voter registrar in addition to participating in the New Americans Democracy Project every two years. The New Americans Democracy Project educates the members of the surrounding community on political issues and registers people to vote.

â€œAll that is non-partisan work, but it is essentially telling the community, â€˜look, you need to get involved in the political process because thatâ€™s what determines our future,â€™â€ Luthra says.