Martin Shlaymoon: Resettlement made easy with a family of 60

Blinded by flashing lights and deafened by shrieks and cries, Martin Shlaymoon felt smothered among the multiple pairs of arms reaching out to squeeze him. Nearby, his mother Christina let out a piercing yelp. In seeing her overcome with such intense emotions, Shlaymoonâ€™s eyes filled with tears.

Passersby stopped to stare, a bit judgmental and a bit curious. His uncle shoved a video camera in his face, 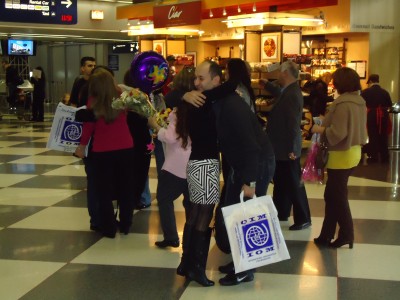 Shlaymoon greets his aunt at the airport upon first arriving in Chicago in March 2010.

and a cousin snapped photographs. After nearly two nomadic years, Shlaymoonâ€™s feet finally touched down at Chicagoâ€™s Oâ€™Hare International Airport where he was immediately subjected to affection and screams from 25 of his closest relatives.

Nearly 6,500 miles from the house in Baghdad where he grew up, Shlaymoon, at age 33, finally felt at home. 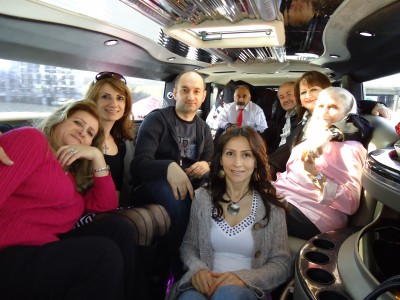 Martin in the limousine with his family, on their way home from the airport in 2010.

From the airport, Shlaymoon, his parents and younger sister were taken in a limousine to the home of Shlaymoonâ€™s grandmother. Brightly decorated banners and streamers dotted the house, welcoming the Shlaymoons into their new life. Inside, the family shared their first meal all together in more than 20 yearsâ€” a feast of traditional Middle Eastern kebabs, rice and Tabbouleh, providing a taste of the past amid their new surroundings.

But along with the Shlaymoons’ tears of happiness came a painful discovery. The same day the Shlaymoons arrived in Chicago, they made a trip to a nearby nursing home to visit their grandfather. While they Shlaymoons were in Iraq, their grandfather would often call to make plans for the moment they would reunite in the U.S. He planned to take them shopping, help them find an apartment, and them them the ways of American life.

But their grandfather had recently suffered a stroke. When Shlaymoon and his family appeared in the doorway of his nursing home room, his face remained blank, not even recognizing his own daughter. It had been only four years since the last time they saw each other.

[Audio:https://immigrantconnect.medill.northwestern.edu/wp-content/uploads/2012/06/grandpa.mp3] Listen as Martin recalls the day he first visited his Grandpa upon arriving in the U.S.

Two years have passed since the day Shlaymoon first arrived in the U.S. in March 2010. He lives with his parents and sister in an apartment in Jefferson Park, a quiet neighborhood on the Northwest side of Chicago. Shlaymoon is embraced by family that approaches nearly 60 relatives living in the area, including aunts, uncles, cousins and a grandmother. During the week, Shlaymoon splits his time between working at Sears, taking English classes and working in gasket manufacturing at Federal Mogul as he seeks a professional career as a chemist. To Shlaymoon, coming to the U.S. to join his family was always a dream.

â€œI used to not feel comfortable going to sleep because something could always happen,â€ Martin says, reflecting on his life in Iraq. Sitting in his living room, sharing traditional Middle Eastern pastries with his mother, his voice wavers. â€œBut now I can sleep and feel really safe. This was the first change in my life. Itâ€™s simple, but when you lose something and you get it againâ€¦you just canâ€™t make a comparison to that.â€

As Christians, the Shlaymoon family was a minority living in the primarily Muslim country, but they did not always feel different from other Iraqis. In 2007, around the peak of the war, Shlaymoon and his mother Christina were both working for the government at the Ministry of Oil; she as a powerful financial manager and he as a chemist with a PhD. As financial manager, Christina was responsible for signing off on all financial documents.

One afternoon, Shlaymoon sat with his family at the kitchen table drinking traditional Iraqi tea as they did on most days. This was the peak of the war, however, and routines were easily interrupted. The ringing of his motherâ€™s cell phone startled Shlaymoon. He watched her face as she picked it up.

â€œChristina? You must sign off on every paper you receive without question,â€ said the voice, sinister on the other end.

â€œYes.â€ Her faced turned jaundiced. â€œAnd if I donâ€™t, then what will you do?â€ Shlaymoon recalls his motherâ€™s words.

Shlaymoon knew something horrible would happen to his family if they didnâ€™t leave Iraq soon. With the lack of government and police enforcement brought on by the pandemonium of war, threats were common. Still, the Shlaymoons were shocked to finally be the victims.

â€œFrom 2004 to 2007, it was almost like we lived in a country without any law,â€ Shlaymoon says. â€œAnybody could do anything. Imagine taking the police out of Chicago for three hours. Now imagine that for three to four years. If anybody had any sort of problem with any person, they would kill them.â€

Shlaymoon knows his family was lucky to be warned. At that point, there were many stories floating around about terrorists attacking homes with machine guns in the middle of the night. Nobody left the house after 10 p.m. But the Shlaymoons ignored the initial threat until a few weeks later, when Christina was greeted at work with a small yellow note on her desk.

â€œYou are Christian and the priority of this country is Muslim,â€ Shlaymoon remembers the message saying. â€œWe would never let a Christian woman control us.â€

Shlaymoon and his family knew they needed to flee. They found refuge in Turkey before finally becoming the last of the Shlaymoons to immigrate to North America and join the close network of familial support. Without his large family, Shlaymoon canâ€™t imagine how his transition to life in the U.S. would have been. 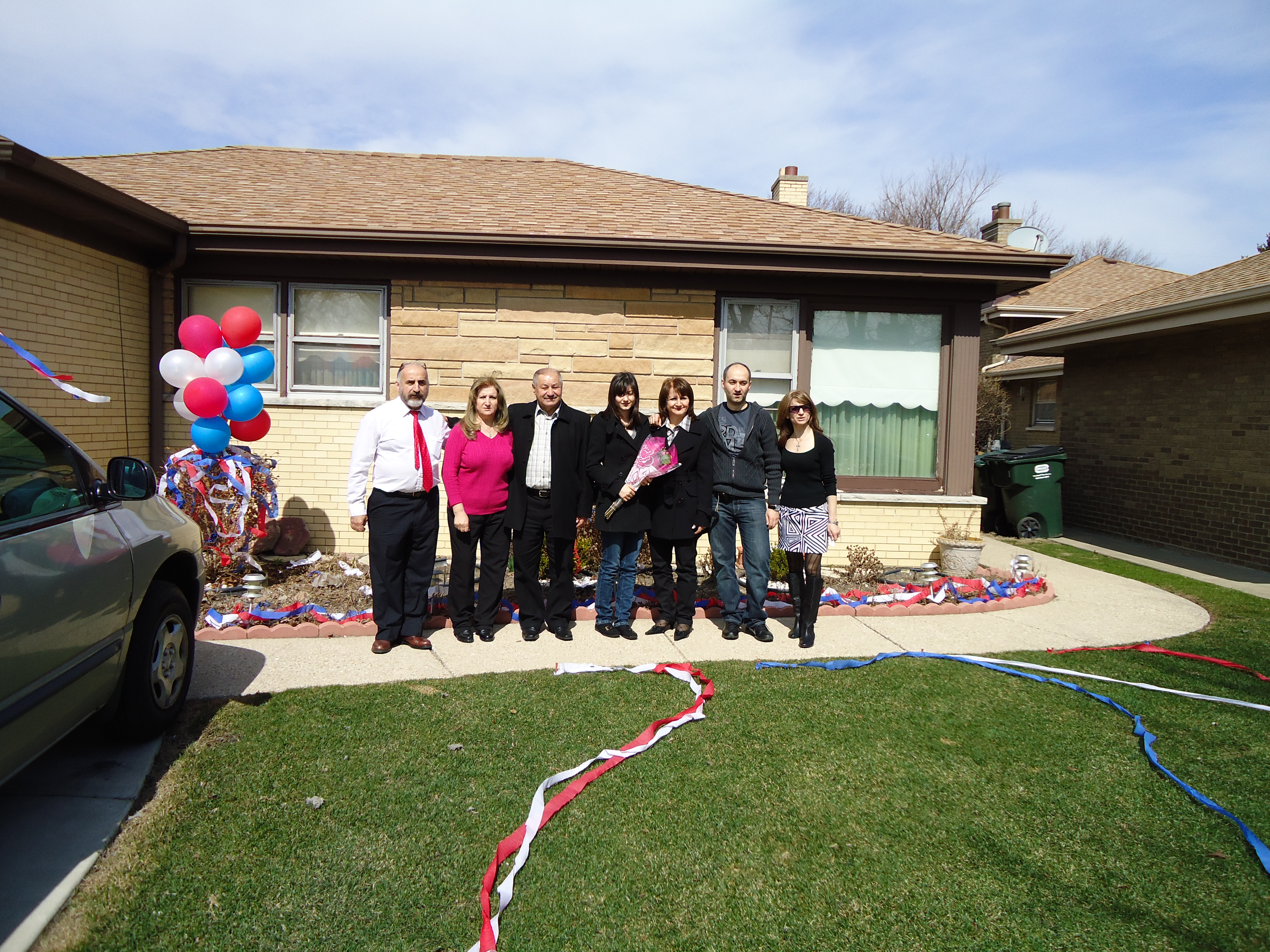 The Shlaymoon family outside their grandmother's house on their first day in Chicago.

When Shlaymoon still lived in Iraq, he looked forward to calls from his family in Chicago each Sunday. It was a weekly reminder that someone somewhere missed him. Still, Shlaymoon couldnâ€™t help but dream that one day he would actually be there with his family at his grandmotherâ€™s house, where the reunions are held each week.

Now that Shlaymoon is actually in Chicago, his extended family continues to recreate family intimacy each Sunday with these gatherings. Sunday is now a time to catch up after a long week of working different jobs, a time for the Shlaymoons to slow down and eat foods that remind them of Iraq.

[Audio:https://immigrantconnect.medill.northwestern.edu/wp-content/uploads/2012/06/aunt.mp3] Listen as Martin describes the reunion with his aunt.

Martin does not identify himself as a refugee. He celebrates American Thanksgiving with his family, but with rice and tabbouleh instead of turkey. He says he never thinks about returning to Iraq. Every so often, the Shlaymoons watch the video of the day they arrived in the U.S. as a reminder of where they came from.

A dream has come true. No plans could have made it so, but it happened.

â€œThis is a big country. I will never forget all the stuff my family did for us when we came here,â€ Shlaymoon says. â€œMany of them came here alone and still talk about the challenges and obstacles they faced. They made it easy for us.â€