For Mustafa Albustani, a pint of blood can often be the difference between life and death. 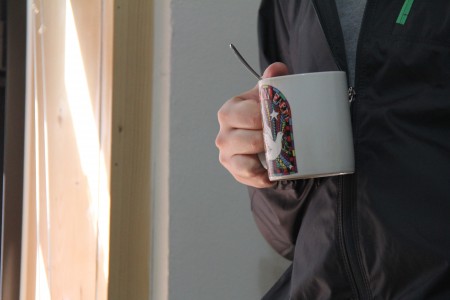 Mustafa Albustani gazes out the window as he holds a cup of sweetened tea.

At 11:30 a.m. on April 21, Albustani entered a non-descript gray building only to be greeted by an empty foyer and a lone Red Cross worker. Shrugging off surprise at the inert atmosphere, he walked up to the man to check-in for his appointed blood donation. It had been more than a year since his last one. Sitting in one of the several chairs tidily lined-up, Albustani dutifully answered the volunteerâ€™s monotonous queries as the volunteer began inspecting the network of veins on Albustaniâ€™s left arm. In the yawning space, his answers seemed magnified.

No, he had not left the country recently. His last trip was thirteen months ago â€“ that was the first time he stepped into America. He is a refugee and before that, he was in Iraq.

All true statements, but all were wrong answers. Removing his hand from Albustaniâ€™s arm, the worker informed Albustani that he would be unable to donate blood until he spent at least three years in the country.

â€œI was shocked,â€ Albustani recalls. â€œItâ€™s very clear you donâ€™t have anyone donating blood, so you should clench on anyone you have.â€

This attitude is a reflection of the conflict that still clings to Albustani, even a year after his departure from Iraq. In a country torn by war and punctuated by frequent casualty, donating blood is sewn into the fabric of social consciousness. Every campaign, which typically lasts three to four days, draws in roughly four to five thousand pints of blood. A doctor with â€œOâ€ RH-negative blood, the 28 year old held himself responsible for donating blood four times a year over the past six years.

â€œYou know youâ€™re going to be in some position where you are going to need someone to give you blood, so you pay in advance,â€ Albustani says, rubbing at the juncture of skin where blood is drawn. â€œThat was the general idea.â€ 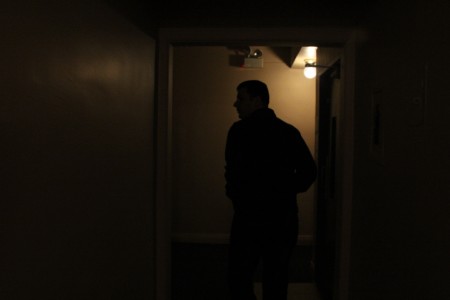 Albustani lives alone in an apartment complex by Loyola University on Chicago's North side, in order to capture the sentiment of education on campus.

A time of war

Albustani grew up in a time of war. The cartoons Albustani watched in primary school were preceded by short news clips of combat, a policy implemented by Saddam Hussein in order to educate children on what was occurring. Blood and weapons neither phased nor excited Albustani â€“ they were simply a part of his reality.

Coexisting in Albustaniâ€™s understanding of war was his parentsâ€™ work as doctors. Despite having four children to feed, both his mother and father frequently treated patients for free. Every day Albustani wondered of this parents: Why are you doing this?Â  They would give him the same response: You have to help other people. This selfless mentality eluded Albustani throughout his primary education, unable to fully grasp his parentsâ€™ dedication in the face of poverty.

It wasnâ€™t until secondary school that it clicked for Albustani.

As usual, his father picked him up from school. Settling into the car, Albustani looked out the window as they drove past familiar scenery, eventually arriving at the medical clinic where his mother worked. And, as habit, both waited for her to wrap up before all would make the journey home. It was during those periods of temporary stasis that Albustani saw firsthand the patients his mother worked with on a day-to-day basis.

â€œWhen you start to go there every day, it gives you another perspective,â€ says Â Albustani. â€œThe lesions, the wounds â€“ it wasnâ€™t what impacted me. What impacted me was how these people still survived.â€

This impact eventually manifested itself in Albustani as a desire to pursue medicine when he was around 14 years old.Â Albustani recalled telling his father, a man with whom he describes as sharing camaraderie, his decision to become a doctor.

[audio:https://immigrantconnect.medill.northwestern.edu/wp-content/uploads/2012/05/Mustafa-Dad.mp3] Listen to Albustani recount the conversation with his dad 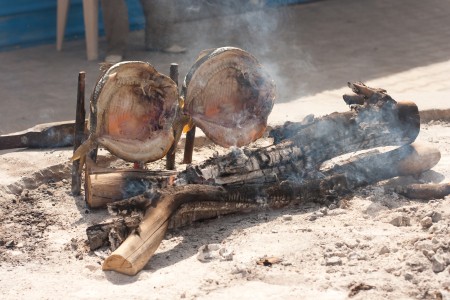 Roasting masgouf over a pit of fire. (Photo courtesy of Al Jazeera English.)

Albustani focused his efforts on studying for medical school throughout high school before spending six years at the College of Medicine University of Baghdad, one of the first teaching hospitals in the Middle East. It was there he received certification in both internal medicine and pediatrics and there he interned before he had to leave the country, for reasons he is reticent to disclose.

On the day Albustani left, his family held one last feast.

Fridays are a time for gathering in Albustaniâ€™s family. Every week, Albustani converged with all fifty relatives at his grandfatherâ€™s home. Charged with the task of preparing masgouf, a traditional Mesopotamian fish dish, Albustani would arrive at his grandfatherâ€™s at 10 a.m. and proceed to slowly cook the succulent meal. Roasted over a large bonfire composed of exclusively apricot tree logs, making masgoufÂ takes time. On those idle Fridays, though, Albustani had all the time in the world.

The day he left, time was no longer on Albustaniâ€™s side.Â Instead of Friday, it was Saturday, and lunch was substituted for dinner. Each approaching hour heralded his departure. 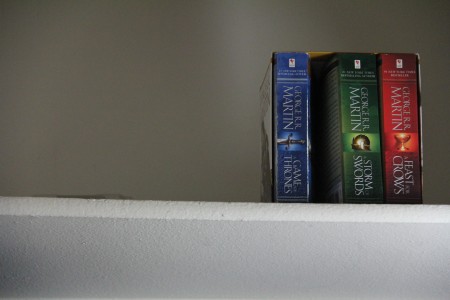 Albustani is a fan of the A Song of Ice and Fire series and currently in the midst of reading the second book.

On Feb. 28, 2011, Albustani arrived in Chicago, displaced and exhausted from jet-lag but determined to acclimate as an American as soon as possible. Albustaniâ€™s older cousin, who had moved to Chicago several years earlier, aided him in locating an apartment by Loyola University on the city’s North side.

The rooms in the relatively small apartment are furnished with only bare necessities. A sofa bed the color of moss lines the wall facing the windows, while a table sits in the upper-right corner of the room. Medical books are neatly stacked to the side and light filters through white blinds. A Game of Thrones, a George R.R. Martin fantasy novel, is on the closet shelf. It is in this room that Albustani has created a new home for himself.

A week following his arrival, Albustani began taking classes at a Kaplan Medical Center in preparation for the United States Medical Licensing Exams (USMLE). Although he practiced medicine in Iraq, Albustani needed to recertify himself as a doctor in America. When taking the classes, Albustani learned from a fellow classmate that it took on average two to four years to complete the USMLE.

[audio:https://immigrantconnect.medill.northwestern.edu/wp-content/uploads/2012/05/Mustafa-Two-Years.mp3] Albustani recalls when he was told he couldn’t become a doctor in the U.S. without exhaustive work toward recertification

For four months Albustani studied at the Kaplan center until the end of July. He resumed independent studying for the USMLE Step 1 while starting an externship at the Shaher Family Health Center. As early as six in the morning, Albustani rose from bed. He got dressed, ate breakfast and promptly sat at his table where he commenced studying until 10 a.m., when his externship started. Arriving at clinic, a roughly 30-minute bus ride away from his apartment, Albustani continued where he left off until patients trickled into the examination room around noon. At 5 p.m. Albustani got off from work and returned home to resume studying until midnight.

This pattern continued for nearly three months, interrupted with only occasional breaks. Time took another meaning for Albustani â€“ time to cut his hair or apply for the refugee assistant program no longer was counted in increments of minutes or hours, but rather how many pages of material would be sacrificed. 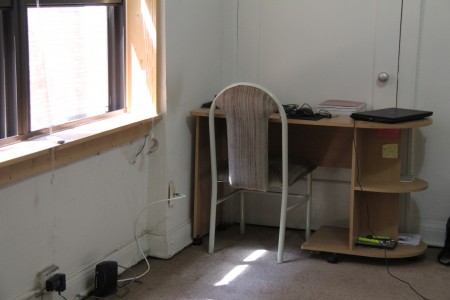 Starting at six in the morning and studying until midnight, Albustani would seat himself at the desk and study for his USMLE.

â€œ[They were] difficult days, believe me. It was long hours,â€ Albustani says. â€œEvery time I [felt] weak, I just focused on the fact that if I didnâ€™t do it, then it meant I canâ€™t practice medicine. So I focused, I just have to think about the exam first.â€ This momentum carried Albustani to Oct. 25, the day of the first step for the USMLE. Feeling nauseated the morning of the examination, Albustani couldnâ€™t bring himself to eat anything.

Computer-based, the test spanned a period of eight hours with 46 questions per block. Each question is thus allotted an average of a minute and fifteen seconds for the test-taker to answer. Typically, the USMLE Step 1 is taken by medical students following the second year of medical school. That day, Albustani emerged from the testing center accomplished and satisfied in the knowledge that he was one step closer to his goal of certification.

Albustani allotted the next two days to rest and explore downtown Chicago, but to little avail. Attention torn between the sights Chicago had to offer and his next step for the USMLE, Albustani could not fully enjoy his mini-vacation.

[audio:https://immigrantconnect.medill.northwestern.edu/wp-content/uploads/2012/05/Mustafa-Downtown.mp3] Listen to Albustani, hoping to be impressed by Chicago’s grandeur

Receiving his score three weeks after the exam, Albustani had already slipped back into the routine of studying and working two days after taking the USMLE Step 1. In February he took the first part of the USMLE Step 2 and shortly after, completed the second part in mid-March. Albustani completed his externship at the end of March and began externship rotations at Advocate Trinity Hospital and Provident Hospital of Cook County in internal medicine where he remained until mid-May. Albustani began externship rotations in pediatrics at Saint Anthony Hospital two weeks ago.

A step in the right direction

Albustaniâ€™s current rotations at Saint Anthony are longer hours than his rotations at the previous two hospitals. There are no guarantees that he will have weekends. After all, Albustani jokes, expecting mothers donâ€™t take weekends off. Yet, it is clear that Albustani is where he belongs. 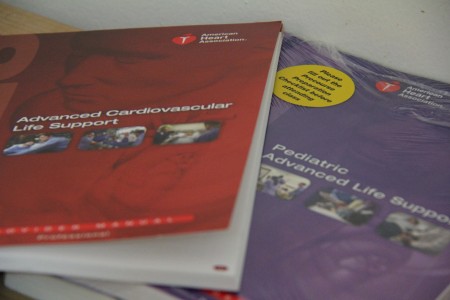 â€œI have to be in internal medicine and pediatric, I have to get them both,â€ Albustani stresses. â€œThey complete each other and itâ€™s more of an intellectual challenge, like a riddle that needs to be answered.â€

When recalling his work in Iraq with pediatrics, Albustani grows first animated, then hushed when he thinks of the patients he will no longer see.

â€œI took an oath and I intend to keep it,â€ Albustani says. â€œWe are all human, you have to help other people and you have a responsibility towards the society you are living in.â€

Although Albustani has cleared the most difficult step in returning to medicine and is now interacting with patients once again, he still retains the same work ethic that defined his first year in the U.S. Come Sept. 15, when applications are due for most hospitals, Albustani will apply for residency which will not only guarantee a steady income but will also place him at a graduate level of medical training. Once he is in residency, Albustani plans to apply for a fellowship in oncology.

This means he canâ€™t rest just yet.

â€œI was born in a war, lived my childhood in a second war and my youth in a third. I was many times close to death and I always made it,â€ Albustani says. â€œSo you have to try to find the good things in life, the bright side rather than the negative. Iâ€™m going to work hard.â€