The violinist plays a song of Russian triumph and with that, the 67th Victory Dayâ€™s Celebration at Temple Judea Mitzpah is concluded. It is a day of speeches and pride as well as remembrance of those lost during World War II. For many Russian immigrants, the Victory Dayâ€™s Celebration put on by the Veteranâ€™s Association of Skokie is a chance to reminisce about Russia, while remembering why many Russian immigrants came to the United States. 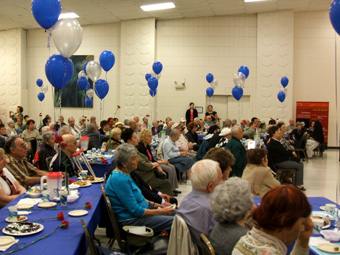 People come from all over the Chicago area to participate in the Victory Day Celebration at Temple Judea Mizpah. (Photo credit: Susan Wexler, HIAS, 2010)

The Russian immigrant population has vastly increased in the last several decades. Since the 1990s and the end of the Soviet Union, the number of Jewish Russian immigrants to Chicago has more than doubled. The numbers increased from 19,048 in 1990 to 47,266 in 2000. This increase in population has created a conservative voting bloc in an area that historically votes Democratic. In the 2008 election in Cook County, 76% of voters (1,608,870 votes) cast for Obama; 23% (482,395 votes) went to McCain. According to the 2010 US Census, Russian immigrants make up 1.63% of the population in Cook County and the majority of their votes will be going Republican. 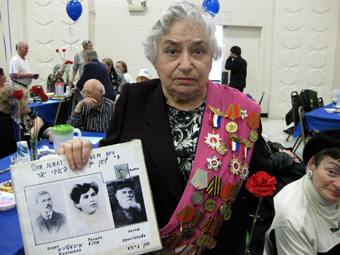 A woman shows photos of her family who were lost during WWII. Many people bring photos of loved ones to remember at the Victory Day Celebration at Temple Judea Mizpah. (Photo credit: Susan Wexler, HIAS, 2010)

This affinity for Republican candidates is often attributed to an aversion Russian Jews have for talk of income redistribution, in reaction to the disastrous results they attribute to it in the Soviet Union.

“In America my vote counts,” stated a source who wished to remain anonymous. “I am not going to waste my vote on government that wants more control of my life and money. I left the [food] lines in Russia. I do not want to return to a government that takes what is mine and misuses it.”

Even today Jewish Russian immigrants, especially the older voting bloc, remember an era in which big government caused them economic distress and many years of hardship. Many Russian immigrants also their Republican voting record to the Reagan Legacy. For some Russians, the appreciation they feel towards former President Ronald Reagan and the Republican Party for ending the Soviet Union and their economic distress will never end.

“We lived through the fall of the wall,” explains Natasha Verlinsy, 68, “I remember the end of the regime and the excitement that came with the possibility of less government control.” 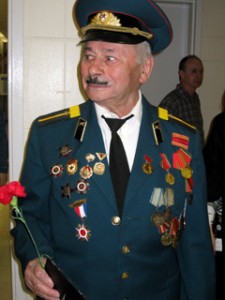 Joel B. Pollak, a Republican Congressional candidate who lost to Democrat Jan Schakowsky in 2010, Â puts it simply, â€œRussian immigrants tend to support candidates that understand the importance of freedom and limited government, and are not easily fooled by those who promise government will solve all their problems.”