Wamidh Jawad: Missing community in a city of strangers 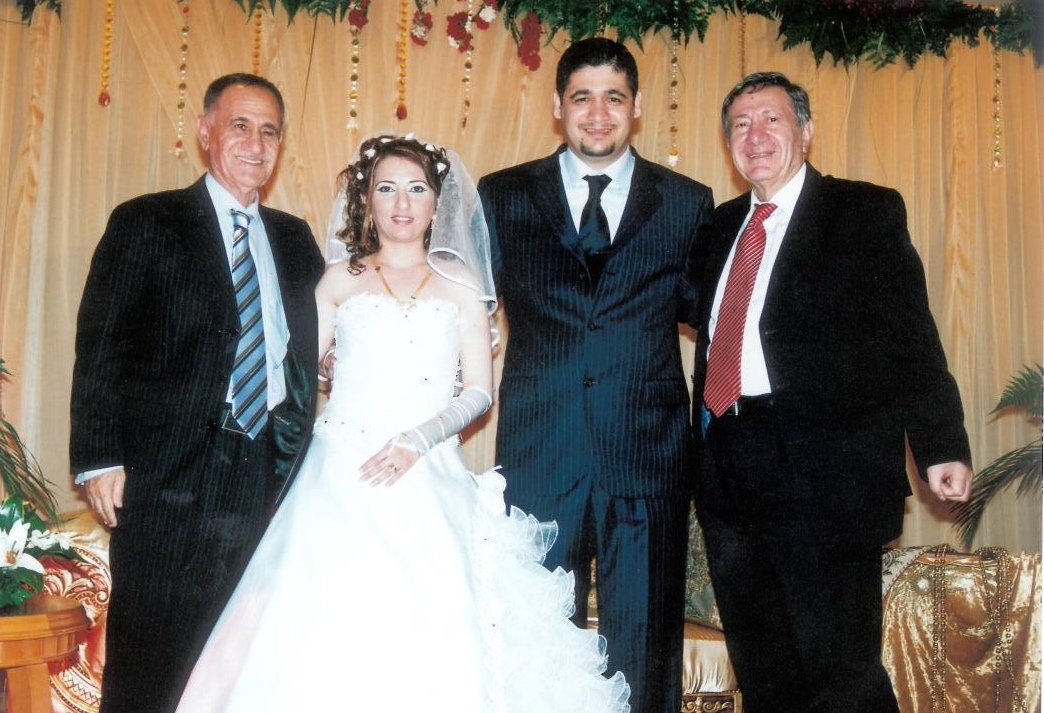 An infant girl wails in starvation. Earsplitting cries echo through the airplane cabin. The girl’s parents need warm water to mix her formula but the flight attendant says none is available until the plane engines start. The plane sits still in line on the JFK runway in New York City, waiting to set off to Chicago. As the passengers grow more irritated, the babyâ€™s father feels their eyes on him. Sensing judgment by these strangers, his skin crawls.

This was no way to start off in a new country.

Wamidh Jawad and his family were on American soil for the first time in their lives. Just a few hours prior, Jawad arrived in the United States on a flight from the United Arab Emirates. Now he faced the challenge of establishing a new life, something he had done once before. Creating a new life means more than just finding a job or a home, though, according to Jawad. A new life must have community.

Reclining after Work with Friends

A dozen Iraqi businessmen gather around a hookah after work. As the hookah bubbles with each puff of smoke, the sun is setting on the Tigris River. The waiter makes room on their table and carries in six plates of large fish, bones and eyeballs included. Jawad is relaxing with his closest circle of friends.

Gathering â€œlike bachelors,â€ Jawad and his friends often talked late into the night about their jobs, their country, and their hobbies. They ordered one fish for every two people, each man splitting a fish with the friend across from him. Each time, one friend would take a turn paying for the whole table, knowing that someone else would pay the next time.

â€œHonestly, I really miss these days because it was kind of simple, nice, lots of fun,â€ Jawad recalls as he looks out his kitchen window, smiling. â€œWe just keep joking with each other.â€

Jawad arrives at his mailbox after dinner and sorts through the envelopes. He holds one a bit heavier than the rest. Opening it, he looks inside. Jawad sees bullets. A piece of mail like that is a death sentence if he refuses to go.

It is time to leave Iraq.

[Audio:https://immigrantconnect.medill.northwestern.edu/wp-content/uploads/2012/05/Wamidh-Sound-Bite-1-Bullets.mp3] Jawad describes opening the letter that he believes came from Al-Qaeda

With just a few changes of clothes packed into a bag, he left his lifelong home that same week. One day, he had community; the next, he was running from it. Jawad departed to Dubai, where he spent the next few months arranging for many of his relatives to join him. 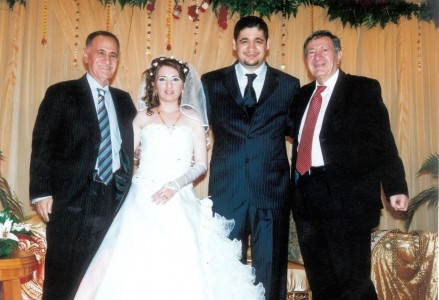 From left to right, Jawad's father, his wife Sanaria, Wamidh Jawad, and Jawad's uncle stand at Jawad's wedding in Dubai.

Jawad, now 35 years old, lived in Iraq for his entire life until he fled the country in February 2006. Living under the dictatorship of Saddam Hussein, Jawad had little exposure to the outside world until international forces arrived in Iraq in 2003. He began working with foreign companies and interacting with non-Iraqi people for the first time. Al-Qaeda, he says, considers him a traitor to his country for working with people from other countries.

After earning his college degree in mechanical engineering, Jawad opened up his own computer business. Technology was limited in Iraq, though. Jawad says he had just two television channels and could not get a satellite. He knew very little about the Internet and almost nothing about mobile phones.

Technology, however, has become his strongest connection to Iraq. Jawad keeps in touch with his relatives and friends who still live in Iraq via email. Six years after leaving the country, he chats with them on a regular basis. He talks with them more than he connects with people he has met in Chicago.

Jawad felt conspicuous during the plane ride from New York to Chicago. He had just arrived in a land of strangers. He knew little about American culture, but he knew they were not all the same. Americans spoke different languages and practiced different religions. The people on his plane had a range of skin color, eye color and hair color.

On the plane, Jawad felt that he was not the only person who was different. America is different.

â€œIn Iraq, there is no variety,â€ Jawad says. â€œYou wonâ€™t see people who came from Europe or China to try to immigrate there.â€

In Baghdad, Jawad felt more solidarity in his community. He says relationships between neighbors in Iraq last for decades. Relatives usually live in the same town. Community is close. When he moved to America, he lost that, but he holds his head high.

â€œIt was not scary,â€ says Jawad. â€œI had been through a lot already.â€ 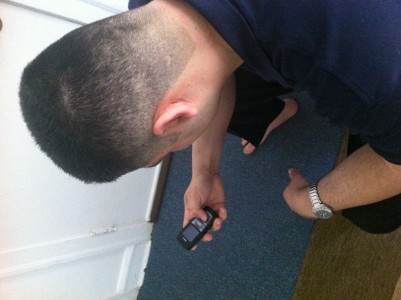 Jawad, a network engineer, toys with the first mobile phone he owned.

Culture shock is healthy, according to Jawad. Although the cultural transition to an American way of life involved embarrassment, he believes it was worth it. The experience of moving to the United States gave him new perspective on himself, his beliefs, and his background. He believes it makes him a better person.

Moving to America was not his first experience of culture shock. Jawad spent five years in Dubai, from February 2006 to February 2011. In need of an income, Jawad decided to continue in computer networking. He opened up his own business for the second time, working for clients from all over the world.

Replacing a Sense of Community

Jawad sits at his breakfast table spreading Arabic creams and natural honey on his bread. He says that food has a way of connecting him with his culture. His daughter cries from the next room. He excuses himself for a moment and returns, holding his daughterâ€™s hand. He shares his dreams for his two-year-old daughter to graduate college, but more importantly, to live a peaceful and stable life.

â€œI donâ€™t want her to go through what I went throughâ€¦relocating every four or five years.â€ Jawad appreciates what he learned through culture shock, but hopes that his daughter can live happily without disruption or displacement.

â€œHere, [I] donâ€™t have a database of friends and relatives,â€ he says, revealing the IT terminology that flows through his brain.

Working two jobs and supporting a family, Jawad finds little time to socialize. Jawad says that his daughterâ€™s first word was the Iraqi word for â€œwork,â€ something he blames on his constant mention of going to work again.

He tries to keep his schedule open on Saturday evenings, though, to gather with other Iraqi men in his Peterson Park neighborhood of Chicago. After a few months in America, Jawad started a group for Iraqi men who live in the triangle between California, Lincoln, and Kedzie Avenues.

Jawad wants to be able to immerse into American culture enough to create friendships with non-Iraqis. He wants to be careful to not be too aggressive in meeting people.

â€œWe learnedâ€¦when youâ€™re not in your region, try to be quiet for a while,â€ says Jawad. â€œWe wonâ€™t be the same socially as before, but weâ€™re open to talk to people.â€

[Audio:https://immigrantconnect.medill.northwestern.edu/wp-content/uploads/2012/06/Meeting-neighbors.mp3] Jawad describes how the custom of meeting neighbors in Iraq affects him here

Regardless of what statistics might suggest, he feels like most people whom he sees are in the same boat as he is; in some sense, everyone is an immigrant. On his street, his neighbors are â€œAsian, Polish, Bosnian, and all talking different languages.â€ He is happy to be in Chicago, though, mainly because he has his family.

â€œOnce I know that I have me and my family in good shape in this place, I will be fine,â€ he says.

[Audio:https://immigrantconnect.medill.northwestern.edu/wp-content/uploads/2012/05/Wamidh-Sound-Bite-2-Weather.mp3] Jawad loves this city â€“ even the Chicago weather

Jawad may have learned a lot through moving to Dubai and Chicago, but he still feels most connected to Baghdad. He says that could change, but he will not rush it.