Not just any letter in purple ink 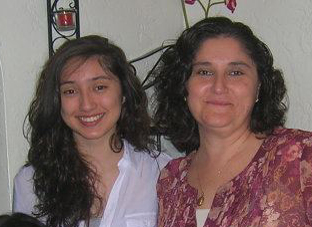 As my mother helps me with the last details of organizing my tiny freshmen dorm room, she places a small white envelope on top of my worn wooden desk.

I try not to notice her careful placement of the envelope and ask her to help me fold the traditional San Marcos Mexican plush blanket she bought me in a Chicago Mexican store only days before.

She gives me cleaning tips. Make sure you vacuum often. Make your bed every day.

She instructs. My mind wanders. What could be in that letter?

I realize it isnâ€™t just any letter. It marks my transition from a mere first generation Mexican-American girl to the ranks of the small minority of Latinas who make it to college, all thanks to the sacrifices my mom has made for me.

And yet, it isnâ€™t until the next day after my mother had boarded the plane returning from Chicago to California that I opened that white envelope. It is after reading the letter that I realize the transition was just as much my motherâ€™s as it is mine.

While I had been born reaping the benefits of being an American citizen, my mother had a quite different experience when she was brought to the United States as a toddler.

She came with her parents, as many others did, for the opportunities that their native Mexico did not offer them.

Little did my grandfather know that the opportunity he sought in the United States would bind him to the almost inhumane conditions of working in Californiaâ€™s agricultural fields. His hands are perpetually calloused from working with tomato and almond crops. Little did my grandmother know that she would almost lose a leg to machinery while working in the tomato fields.

As for my mother, getting an education was her job. It wasnâ€™t easy for her to learn English considering that neither of her parents, to this date, knows English. Each winter, as the farm work ended, my grandparents with children in arms would flock back to their homeland of Jalisco, Mexico.

During the harvest season, my mother was placed in special education classes until she was in middle school. She had no learning disability. The Farmington Elementary School District did it because she didnâ€™t speak English as well as other students in the small Northern California agricultural town.

Neither my grandparents nor my mom had any idea what it meant to be placed in special education classes. To them it was presented as the only option that would help my mother learn English. So my grandparents and mother made it work, because they thought that was her only choice.

Once she made it into high school she had the opportunity to integrate into regular classes, but in her senior year she became pregnant.

She dropped out of high school and took on a role familiar to young Mexican women. She moved into a tiny apartment with my dad after my grandparents shunned her, became a housewife and raised her child, me.

She made sure that I learn and become proficient in both English and Spanish. She stressed the importance of an education beyond high school, the one she never had and that she happily sacrificed for me.

It was that letter, with its purple ink that helped me realize how much she had given to my success. It was in Spanish, the language that had once held her back, that her words would reverberate with me as I go through this journey called college for the both of us.

The letter ran one page. She wanted me to remember, as most moms want their daughters to remember, that she would always be there for me.

While she could have considered me her mistake, she didnâ€™t.

Or as best told by her Spanish words in purple ink, â€œTu has logrado lo que yo no pude. Pero no me arripiento. Volveria hacer las cosas igual.â€

Meaning: You have accomplished what I never could. But I donâ€™t regret it. I would go back and do things the same way.