From Japan to America: Two paths, one track

Tommy Carroll and Shin Taniguchi at their high school graduation

Weâ€™re late, and Iâ€™m glad we are. The rest of the track team is already a half mile into the workout so coach tells Shin and me to stick together and not worry about catching up.

Okay, this is my opportunity. Iâ€™ve got five miles. Hope I donâ€™t seem like an ignorant American.

But what should I say to Shin? The only time Iâ€™ve talked with him is when I introduced myself at the beginning of the season. We usually run in different training groups because he runs the 800 and I run the mile.

Iâ€™m curious about life in Japan. What do kids do for fun? What kind of music do they listen to? I know the countryâ€™s population density is high. Itâ€™d be awkwardly scientific-sounding if I asked him about how that affects daily life though, wouldnâ€™t it? Heâ€™s been here for a couple months at this point, so heâ€™s probably gotten so many dumb questions. I bet he feels like a specimen under a microscope. I really donâ€™t want to annoy him. He doesnâ€™t seem to talk much to the other runners, and weâ€™re already two months into the season. I want to make him feel welcome

â€œSoâ€¦how do you like GBS so far?â€ I finally ask. Itâ€™s a neutral question, something Iâ€™d ask anyone new to the school.

I feel bad for him. I tell him that Iâ€™m behind on my homework even though Iâ€™ve been in this country my entire life and immediately think I just sound lazy. He laughs and asks me about my interests. We talk a bit about music. I tell him I play drums in a rock band. He says he likes listening to music but doesnâ€™t know much about playing it. We talk sports, joking about how Americans insist on calling his favorite sport soccer instead of football. The sport is played primarily with the feet.

The conversation is surface-level but the five miles passes quickly. By the end of the workout, I feel comfortable talking to Shin and I think he feels comfortable too. He says we should run together again during another practice. I think Iâ€™ve found a new friend.

Shin Taniguchi moved to Glenview from Japan at a tough time. The recession was in full swing. Car companies were frantically scrambling for government stimulus and Wall Streetâ€™s financial heavyweights were getting their own federal mercy, but that wasnâ€™t Â a problem for Shin. His dad had a job–marketing for an auto parts company that had just moved him to a new position in the comfortable northern suburbs of Chicago. The tough thing for Shin was having to start a new life at Glenbrook South High School, right in the middle of sophomore year. 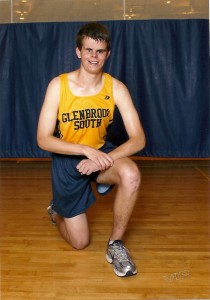 We started a three-year-long dialogue on that first run. Shin was worried about making up work for the several months of class he missed because he had been in a different country speaking a different language, not expecting his father to receive a sudden promotion that would force his entire family to move to America, leaving behind their closest friends and his classmates. I thought I was stressed because I still hadnâ€™t started my English paper that was due next week and no girl had asked me to the Turnabout dance yet. Typical American.

Shin was sympathetic to my plight though and I was curious about Japan. We found ourselves being running partners more often and we started meeting daily during the summer off season.

Our runs were educational. The education was never forced. We just naturally taught each other things. We talked to pass the time and keep our minds off the pain of hard workouts. Once I accidentally tripped and fell on a hill in the park. It lead to a 10-minute discussion about the significance of the words â€œinclineâ€ and â€œdecline.â€ Another time a conversation about the temptations of online shopping evolved into an explanation of how Japanese entertainment often features American characters and culture. I told Shin that my parents wouldnâ€™t let me have a credit card because they knew Iâ€™d spend all my money buying musical instruments online. He said my parents were probably right because he had just spent half of his savings shopping for Japanese comic books on Amazon. Billy Bat, one of the series heâ€™d purchased, was a surreal story based around the assassination of U.S. president John F. Kennedy. He pointed out that Japanese television shows I watched as a kid like PokÃ©mon and Digimon get popular in the United States because the main characters are presented as very American. All this took place during a mid-tempo workout on a forest trail two miles south of my house.

Shin was self-conscious about his English. He regularly told me heâ€™s afraid people will think heâ€™s weird when he speaks in broken English. I told him people appreciate it because itâ€™s really his politeness not the language barrier that causes him to take longer to choose his words. Those kinds of exchanges usually popped up in the midst of our discussions about differences between American and Japanese culture. Shin would use his iPhone to help him explain a Japanese word or concept that doesnâ€™t have a direct English equivalent. Heâ€™s often asked me language questions that force me to recall proper grammar.

â€œIs the grocery store further or farther from your house than school?â€

â€œI think itâ€™s farther, but when youâ€™re speaking no one really cares,â€ I said.

I enjoyed learning new things about Japanese culture from Shin, which happened almost every time we hung out. He has introduced me to some great Japanese music and food, talked me through some of Japanâ€™s most popular television shows and showed me a passion for national soccer teams most native-born Americans donâ€™t understand. Heâ€™s convinced that Japanese bars are more fun than American bars. Iâ€™d like to think heâ€™s found my briefings on American culture interesting and useful too.

My friendship with Shin has taughtÂ  me that the best way to confront issues of identity and belonging is casual open discussion. Although our life experiences differ greatly from one another, they overlap in many places. Finding those common areas through casually shared anecdotes is exciting and is proof to me that the arbitrary boundaries can be crossed successfully.

Just by being friends with Shin Iâ€™ve found myself interacting with other immigrants who I had talked with rarely despite having known them since junior high. Heâ€™s met people he probably wouldnâ€™t have heard of if we werenâ€™t friends. Thatâ€™s part of the problem, though. Besides a couple of other runners and me, most of Shinâ€™s friends are immigrants. Iâ€™ve noticed it at parties and social gatherings. At my graduation party, I found him off to the side of conversations, quietly browsing the internet on his phone because he didnâ€™t know my other friends. I made sure to introduce Shin to more people and he did the same for me at a going-away barbecue he hosted, where I met Asian classmates I didnâ€™t even know I had.

Now Shinâ€™s at the University of Illinois, studying computer science and Iâ€™m at Northwestern University, studying journalism. We donâ€™t run together much anymore, but we always make sure to get lunch once or twice while on break from school so we can catch up.

We seem to have similar experiences. Too much homework, not enough sleep, balancing work and a social life. Thereâ€™s a major difference though. We experience college life in different communities. Shin is living in an apartment with all immigrants and an international student while Iâ€™m living in a house with all American-born students. Shin says heâ€™s comfortable in the â€œforeignâ€ community. He finds it difficult to make connections with other parts of the student body.

Shin says he misses Japan. He wants to spend time with the friends he left behind when he immigrated here and now that heâ€™s old enough to travel alone, he says he plans to fly back to Japan as often as possible to see them. Witnessing Shinâ€™s position as a partial outsider makes me appreciate my friendship with him. Iâ€™m glad weâ€™ve been able to transcend considerable social boundaries and become close friends after enduring all those miles together. In that way, weâ€™re still on track.