Looking through the eye-hole of the black, Canon XF300 video camera, Iâ€™m focused on Sister Mary Wendlen. I zoom out to an office with low ceilings. I can smell instant coffee.

Brennan behind the camera for the Nuns on the Bus documentary.

Sister Mary translates for our small crew that Su Casa, a Catholic Charities initiative for Cincinnatiâ€™s Latino community, is buzzing today with rumors that the U.S. Supreme Courtâ€™s decision on Arizona v. United States is expected. Seconds later, I pull a vibrating iPhone out of my back pocket to see I have a breaking news notification from my New York Times app. As I read the headline out loud, â€œBlocking Parts of Arizona Law, Justices Allow Its Centerpiece,â€ the focus shifts to me, an intern behind the lens.

We move out to a hallway that is aligned with finger paintings of houses and families that summer school kids had taped to the wall. The camera’s rolling. We ask Su Casa’s employment coordinator Jose Francisco Echeverria what he thinks of the decision to uphold what critics call the â€œshow me your papers” provision.

Holding back tears, Echeverria describes on camera a memory of being pulled over and interrogated by police on his way to a job interview. He reenacts his interaction with the officer, who questioned him for driving through the town of Hamilton, Ohio.

He recalls saying, â€œIâ€™m going for a job interviewâ€¦ like 45 minutes from my house.â€

The cop tells him, â€œWell thereâ€™s a lot of jobs in your area, so what are you doing here?â€

â€œSo he went back to the car, and like 15 minutes later he just threw my license on the dashboard and said ‘you can go,’â€ Echeverria recounts. â€œFive minutes later, down the road, there was another cop, another sheriff, and he stopped me,â€ he says.

Then Echeverria says a third officer pulled him over, asking for his license. “A third?” I ask. He sticks by his story.

That officer also let him go, but followed him to his interview. He was 20 minutes late and didnâ€™t get the job. 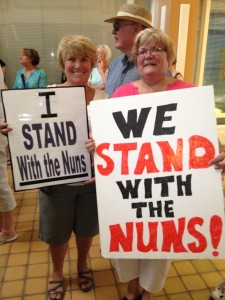 Our trip to Su Casa was an unexpected detour from a three-week summer road trip documenting a group of politically-involved nuns who were driving across the country for Nuns on the Bus, a campaign sponsored by Network, a Catholic Social Justice Lobby. Â We shot footage of the nuns as they beat down the doors of lawmakers who had voted for the House Republican budget that was authored by Wisconsin Rep. Paul Ryan who would later become the GOP candidate for Vice-President. And we shot footage of them as they touched the lives of people who were served by social welfare programs, such as Su Casa.

What I would remember most was the impromptu reaction we captured of Echeverria as he received word of the Supreme Courtâ€™s decision in Arizona v. United States. The Courtâ€™s decision was mostly favorable to undocumented immigrants but for him, the decision to uphold the provision that continues to allow police to check the immigration status of people during traffic stops brought back the feeling Â of being unwelcome in the place he calls home.

I ate a lot of fast food during those three weeks on the road from Des Moines to Washington D.C. I sensed that America is a truly accepting place, catering to all types of people and palates. But I canâ€™t escape the unsettling feeling in my stomach that I traveled more than 2,000 miles and I wasnâ€™t pulled over once.