A Korean-Russian discovers the Bill of Rights 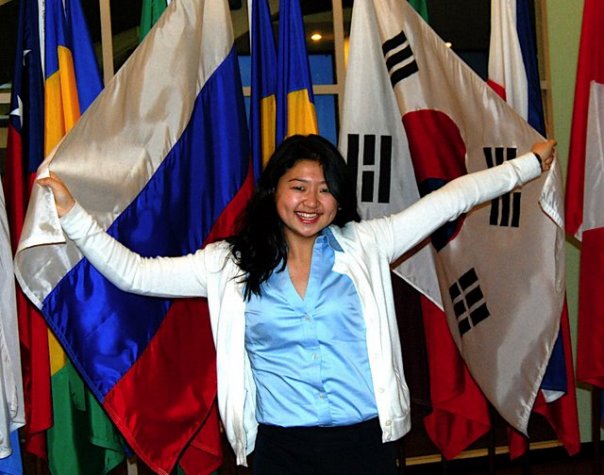 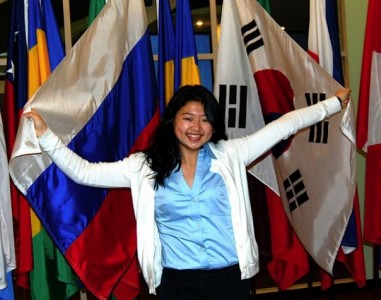 Evgeniya Kim squinted and focused down on the carpet pattern in intense concentration. â€œCan you repeat the question?â€ she inquired, with a guilty glance at me.

â€œThe first ten amendments to the United States Constitution â€“ What are they called?â€

Her test was coming up in less than a week â€“ one of the first Social Studies tests she would take as a student of the United States public school system.

â€œFirst ten amendmentsâ€¦â€ she repeated, and scratched her temple.

I thought back to the first time I saw Evgeniya, or Zhenya, as we called her in our native Russian. Her parents, two younger sisters and she walked through my front door in the summer of 2003, having come from a small town in Uzbekistan called Ferghana. At the time, since her father and my father did business together in Ferghana, the Kims lived in our basement in Queens until the Korean-Russian family soaked in enough of America to sustain themselves.

Although she is five years older than I am, my friendâ€™s knowledge of United States history and politics always fell far behind mine, due largely to her lack of schooling in the U.S. While I traced my hand into a turkey every November in celebration of the infamous tale of Pilgrims and Indians, Evgeniyaâ€™s education never taught her about such American traditions as Thanksgiving. The seemingly simplest snippets of American history were often lost on this immigrant family.

â€œCome on,Â ti eta znayesh,â€ I urged. “You know this.Â What did the amendments give to the American people?â€

I looked closely at her, trying to will the answer to float from my brain into hers. Her brows furrowed in deep concentration on the conceptual ghosts of endless stacks of index cards sitting downstairs on her desk, filled with information about American presidents and laws. Her experiences had taken a toll on her, but her spirit was still strong, and I knew she was determined to find her place in this strange, new continent.

The clock ticked almost 60 times and I wondered whether it might be time to take a break from the studying, or perhaps switch to another topic, like geography.

People often say they donâ€™t like airports because of all the time spent â€œwaiting around.â€ For Evgeniya and her family, this waiting period lasted for seven months. Upon arriving at JFK, they discovered that they’d been swindled. The woman they believed to be their immigration attorney turned out to be a fraud, and the documents that she had given them, documents they had bought for about $15,000 after saving for many years, completely voided pieces of paper.

They were told that they were going to be deported. Upon suggestion from an airport interpreter, however, they requested political asylum, and thus began their long immigration process. The family was put into a holding cell, her parents Viktor and Galina separated from each other and from their three daughters, Evgeniya, 14, and her two sisters Sasha (or Aleksandra) and Yuliya, 11 and 9, respectively.

Two days later, officers arrived and took the family in chains across JFK into a police van, which took them to a federal immigration facility in Pennsylvania where the three girls and their parents lived for seven months, until their legal matters had settled.

I nodded. The problem wasnâ€™t in content. She knew all too well about the freedoms in the United States of America, or else she and her family would not have risked everything to come to a place that offered them. 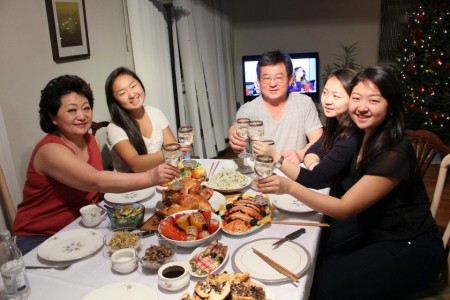 The Kims have Christmas dinner in their Flushing, NY apartment.

Being a Korean family in Uzbekistan was not easy and my friends, the three Kim girls, had memories of being physically and verbally harassed in their school in Ferghana for their cultural and ethnic differences, while their parents faced parallel problems in the workforce. Evgeniya’s father, who had an engineering degree, lost his job in construction management and became a smallholder farmer because “his name didn’t sound right.” Like many other Korean families, they decided to emigrate to the United States for a better future.

I alsoÂ knew that Evgeniya would especially understand these principles, because, in many of the legal situations that the Kims underwent, she served as the family liaison with immigration officials. When the Kims were held in custody at the shelter, it was often up to their eldest, 14-year-old daughter to communicate important information that her parents didnâ€™t have the English skills to convey.

No, the problem wasnâ€™t in the meaning behind the answer. I guessed she must have just forgotten what the document in her mind was called â€“ a classic case of word recall.

â€œWhatâ€™s another word for those, then?â€ I asked. â€œRhymes with bites,â€ I added under my breath.

The blank stare remained on her face for another moment, and then her eyes lit up. â€œRights! Bill of Rights!â€

â€œThere you go!â€ I knew her parents would be proud that their daughter was learning about the culture and history of this great new nation. â€œI told you â€˜you knew it.â€™â€

About ten years later, Evgeniya Kim sat in an immigration and naturalization facility in Long Island City, Queens, and quietly smiled to herself as her proctor asked her the next question of her Naturalization Test: â€œWhat do we call the first ten amendments to the Constitution?â€ Too easy, she thought, and answered with conviction.

All five Kims passed their citizenship test. Victor and Galina own a small Russian food store in Queens. Evgeniya graduated from CUNY Hunter through the Macaulay Honors program and now works for a non-profit investment fund that promotes economic development in post-conflict countries â€“ often dealing with similar issues that her family faced in Uzbekistan. Her two sisters areÂ  full-time college students in different states around the country â€“ though they always make sure to fly home and eat turkey together on Thanksgiving.