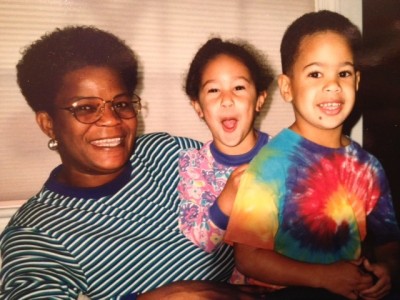 I was sitting at my kitchen counter, eating and talking to my mom while she cleaned the kitchen. It was after lacrosse practice during my senior year of high school. I was drawing out dinner so I didn’t have to work on college applications.

My mom told me she had seen our old babysitter, Dorothy, at the grocery store that afternoon.

I had not seen Dorothy in years, though I still thought of her affectionately. I had grown up with her, after all.

Dorothy was a tall woman with tight curly hair that was cut into a short updo. She wore gold jewelry and had thickly rimmed, large glasses; her skin is dark â€“ purpleish in some areas â€“ smooth and soft. Dorothy smelled like sweet rice, which I later realized was her hair product.

Though I never felt that my parents were absent when I was a child, it was Dorothy who braided my unruly hair when my mother, who is white and was less adept at dealing with my black hair anyway, had gone early in the morning. Dorothy dealt with my tantrums and taught me how to fall asleep at night when I was too scared of the dark to close my eyes.

She even plays a part in the story of my birth â€“ it was Dorothy whom my father called when my mother was going into labor and needed someone to stay at the house with my older brother, Harrison.

From my infancy until I was seven, Dorothy was with us five days a week.

So when I was sitting at my kitchen counter in 2010 and my mother told me Dorothy’s husband had died, my heart went out to the woman who had helped raise me.

My mom made a face â€“ a half-grimace, half-sneer â€“ and then told me about Dorothy’s “deadbeat” husband and how Dorothy was happy he was finally out of her life.

I was shocked, both that someone could be happy about the death of a spouse and that Dorothy’s husband sounded so emotionally, financially and psychologically abusive. When I was young, I didnâ€™t think of Dorothy as having a husband.

To me, or rather, five year-old me, Dorothy was a part of my family. In reality, she was an immigrant from Ghana who sent every penny she made caring for me and my brother to her sister, who was raising Dorothy’s two sons in Ghana.

I knew next to nothing about Dorothy’s life.

In middle school, I started asking my parents questions about Dorothy’s background though nothing particularly substantial ever surfaced. I’ve learned of bits and pieces of Dorothy’s life since I was 12, always through my mother.

I discovered Dorothy had come to the U.S. with the goal of earning enough money to bring her sons over as well, presumably for educational purposes.

While she was still working for us, Dorothy was able to do just that, though the younger son acted out so much that she sent him back to Ghana my junior year of high school, my mother guesses. I don’t know if he still lives there or if he ever returned to the states. There is still a lot I don’t know about Dorothy, decades that I’ll probably never learn about.

I can’t remember seeing Dorothy since she stopped working for us in 2000, and I don’t think I’ve spoken to her since. We used to send her Christmas cards and occasionally she and my mother would talk on the phone or run into each other in town.

I was uncomfortable with not knowing anything about Dorothy â€“ she had all but lived with us for nearly a decade. For a while, I wanted to know everything about her.

And yet, from the time I started questioning my mom about Dorothy through the end of high school, I never called her. The fact that I knew so little about her daunted me â€“ if I called her, what would I say? The conversation would be time consuming and emotional â€“ there was too much to catch up on. Besides, what if she didn’t want to hear from me? It seemed odd to get in touch with her after years of not bothering to reach out.

So I never called, and eventually, my desire to learn Dorothy’s history waned.

My relationship with Dorothy, though entirely. unique, is similar to my relationship with many of the immigrants I grew up knowing. Living right outside of Washington, D.C., the number of foreign-born classmates and teachers I interacted with daily about equaled those who were U.S. born. I knew little of their lives.

Though my lack of knowledge about the lives of immigrants I called close friends used to be distressing, I made peace with my ignorance when I sat at my kitchen counter and listened to my mom tell me about Dorothy’s husband.

Individuals are more than their past experiences. The past is important, but it doesn’t need to dictate how people play out their future.

When I found out about Dorothy’s husband, I discovered that I didn’t need to know everything about Dorothy’s story, significant thought it undoubtedly is, to understand, respect and love her.