Deferred for the holidays

[Check out Gideon Resnick’s companion video story – Under deportation, above fear. A version of this story and Gideon Resnick’s video were published on Reflejos in Spanish -Â La lucha de una familia mixta – and in English. Reflejos, which is a sister publication of the Daily Herald, is a bilingual journal that has served the Chicago suburban Latino communities for 20 years.] 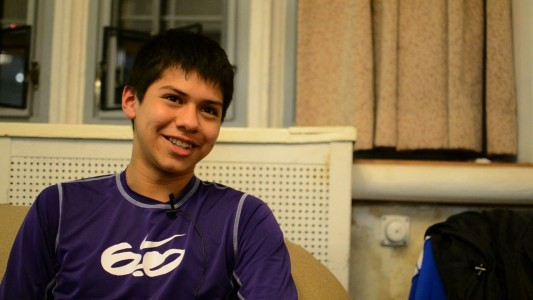 In late October 15-year-old Danny, testified at his fatherâ€™s deportation hearing. Impressed by his testimony, the judge cancelled his fatherâ€™s removal order and allowed him to stay with the family.

Three weeks later, Miguel, a 31-year-old full-time waiter living in Waukegan, was granted two yearsâ€™ freedom from deportation. Miguel described the day, Nov. 17, as one of the best days of his life.

Carolina, a 23-year-old junior studying education at Northeastern Illinois University, is applying for deferred action from deportation. She just needs her lawyer to approve some documents and her application will be ready.

That is quite a bit for one family â€“ the Parras – to pack into one month, one in which a Presidential election was marked by divisive rhetoric about the stagnation of U.S. immigration policy.

Both Parra parents and their two eldest children have dodged deportation since they came to the U.S. from Mexico City in 1993. Danny and his two younger siblings, 11-year-old Josue and 12-year-old Keren, are citizens by birth.

â€œA lot of Latino families are facing similar situations in terms of the parents being undocumented and a couple of the kids are American-born citizens facing possible separation,â€ said Isabel Anadon, policy director at the Latino Policy Forum, an organization that works to educate immigrant communities about proposed immigration laws.

The Parras donâ€™t get to spend much time together, but they were able to celebrate Mr. Parraâ€™s freedom from deportation on Thanksgiving.

Mr. Parra could have just as easily been deported, said Oscar Chacon, Executive Director of the National Alliance of Latin American & Caribbean Communities, an organization seeking to improve the quality of life for immigrants living in the U.S.

With the current immigration system, there is no predictable standard for judging whether or not an undocumented immigrant should be deported, Chacon said.

Danny is sitting through his fatherâ€™s deportation hearing in a courtroom in downtown Chicago. Dannyâ€™s father was forced into deportation proceedings after he was involved in a car crash in 2011. The familyâ€™s lawyer had helped Danny prepare for this moment, but the high school sophomore is still nervous.

He is called before the judge who asks Danny about school. How are your grades?

Danny tells her heâ€™s a straight-A honors student. His GPA is a perfect 5.0 on the weighted grading system and heâ€™s in the process of applying for summer engineering programs at Stanford and Johns Hopkins for gifted high school students.

The judge nods and asks Danny about how he would be affected by separation from his father.

Danny says he can hardly imagine it. He lives in northwest suburban Niles with his parents and two younger siblings. Danny says he would have to focus on finding work to support the family if his dad got deported. He says his school work would become a second priority. Dong well on his schoolwork would be impossible.

The judge nods again and stops questioning Danny, who leaves the room while others testify and returns to hear the decision.

The judge tells Mr. Parra he has some pretty impressive children and grants him cancellation of removal because his deportation would result in unreasonable hardship for at least one family member.

Mr. Parra is eligible for lawful permanent residence. He now has a temporary social security number and a driverâ€™s license and is in the process of applying for a green card.

It will be at least five years before Mr. Parra can become a naturalized citizen and petition for lawful permanent residence for Miguel and Carolina, who at the time of the hearing were also in the United States illegally.

Mr. Parra must first get a green card, which can take over a year for Mexican immigrants, attorneys say. The United States can only grant a limited number of green cards to nationals from a single country, according to the Immigration and Nationality Act of 1965. [For more, read Understanding Quotas and Green Card Delays: Why is My Case Taking so Long?] Immigration attorneys say this puts Mexican nationals at a disadvantage because they are the largest group of immigrants to the United States on a yearly basis.

First one through the system

When the Parras came to the U.S., Miguel was 11 and Carolina was 4. 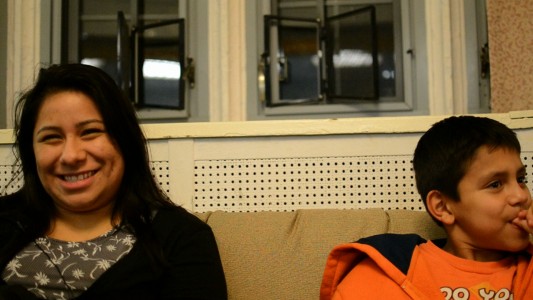 Growing up brother and sister both knew that they had to be especially careful with police officers and that their future options in the country were limited by law. Their choice of which college to attend was limited to schools that wouldnâ€™t charge them out-of-state tuition due to their lack of legal documentation.

Miguel came to the U.S. in 6th grade, not knowing English, but studied to become a high achieving student in high school. It took him seven years to complete college. He transferred universities twice and worked two jobs to pay for his education. He graduated from Northeastern Illinois University in 2007 with a degree in secondary education.

Miguel couldnâ€™t apply for teaching jobs after receiving his degree and instead began working as a full-time waiter when his former employer went out of business. After nearly five years of waiting to start his career, Miguel applied for Deferred Action for Childhood Arrivals (DACA) in August.

DACA, which could affect approximately 1.4 million immigrants, according to an Immigration Policy Center study, offers two years freedom from deportation to undocumented immigrants under the age of 31 as of June 15 who came to the United States before their 16th birthday and who have continuously resided in the country since June 15, 2007, without committing a significant crime. Applicants must be enrolled in school or have a high school diploma or equivalent degree. The program also offers a 2-year work permit to individuals who are approved for deferred action.

The DACA request form requires applicants to provide biographical information, including current and past addresses, immigration history, level of education and criminal record. Applicants must also complete the employment authorization form, undergo a background check that involves fingerprinting, and provide adequate records to prove their continuous residence in the country since June 15, 2007. Each applicant is charged a fee of $465.

Miguel said the hardest part of the application was proving that he came to the country before he was 16 and that he has resided in the U.S. without interruption since 2007. Miguel gathered old letters of recommendation, scholastic and athletic awards, and hospital bills. He added them to his application and sent it to USCIS.

On Nov. 17, eleven days after President Obama was re-elected to a second term, Miguel received a notice in the mail. It said that he had been granted deferred action and would receive a work permit shortly. Now safe from deportation, Miguel says he plans to start substitute teaching next semester while he applies for full-time teaching jobs with the Chicago public schools. He says he wants to teach Spanish or gym at a school on the impoverished South side of the city, so he can try to help young immigrants find a way out of the ghetto.

â€œIâ€™m not saying I can be superman or anything, but if I can help one or two kids, or maybe three see that here I am now. I had nothing but now Iâ€™m here. There is a future for you, then Iâ€™ll be happy,â€ Miguel said.

Itâ€™s 1:00 a.m. and Carolina is just getting off waitressing duty at a restaurant in the west loop of Chicago. She has class tomorrow morning and a paper to write for an advanced-level course about Latino identity in America. She doesnâ€™t sleep much.

Parra gets her work done, but the school-work-homework routine doesnâ€™t end. Unlike many of her classmates, Parra has to keep her full-time job. Sheâ€™s in debt to the university and if she canâ€™t raise enough money, sheâ€™ll have to delay the start of her senior year by a semester so she can pick up a second job. It wouldnâ€™t be the first time this happened in the five years since she graduated high school.

Carolina was more hesitant to apply for deferred action, fearing like others that admitting her unlawful presence could put her in danger of deportation. Now she says sheâ€™s decided the risk is worth the opportunity to shorten the path to a career that has taken her brother so long to launch.

â€œI need to do this, whether itâ€™s for the best or not, and hope that all my sacrifices pay off one day,â€ she said. â€œMy goal is to graduate with honors. Then Iâ€™ll go to employers and say hereâ€™s my work permit, hereâ€™s my diploma and people will judge me on my merits, not my immigration status.â€

But young immigrants like Carolina and Miguel are a long way from having a clear or easy path to citizenship because deferred action doesnâ€™t ensure them lawful permanent status.

Representatives of the Latino community say some type of immigration reform is likely during the next four years. The extent of the reform is uncertain.

Anadon said passage of the DREAM Act [read the 2011 Senate version], which would offer a path to citizenship for undocumented youth who attended college or enlisted in the military, is the most likely immigration policy reform to succeed during the next presidential term. She said passing a more comprehensive immigration reform to reach all of the 12 million undocumented immigrants living in the country is a long term goal. Passage of comprehensive immigration reform will have to come as part of a larger plan to improve the nationâ€™s economic policy, Anadon said.

â€œI think not only with DACA, but with any form of temporary release from deportation weâ€™ve been granting, weâ€™ve been experimenting with what it is to keep hundreds of thousands of people under temporary work conditions, but without giving them the benefit of being able to access lawful residency and subsequently citizenship,â€ Chacon said.

Granting temporary status to a large number of immigrants is a dangerous solution to the countryâ€™s immigration problems, Chacon said. Such a system would create a form of second-class citizenship in which the lower immigrant class could work but not achieve full integration into society.

â€œWe need to make sure the laws weâ€™re passing are actually helping immigrants and not harming their situation,â€ Chacon said.

For Danny, who follows politics more closely than kids his age because of his familyâ€™s situation, itâ€™s just a matter of politicians getting their act together to recognize the contributions of hard working residents.

â€œMitt Romney says the reason Obama won is because he gave gifts to get the Hispanic votes and people agree,â€ Danny said. â€œPeople think Hispanics and blacks just want stuff and donâ€™t do anything about it. My brother has a degree in education and my dad has worked here for 20 years and people still think weâ€™re lazyâ€¦ Thatâ€™s garbage.â€