As demand for U Visa grows, visa’s future for abused women uncertain 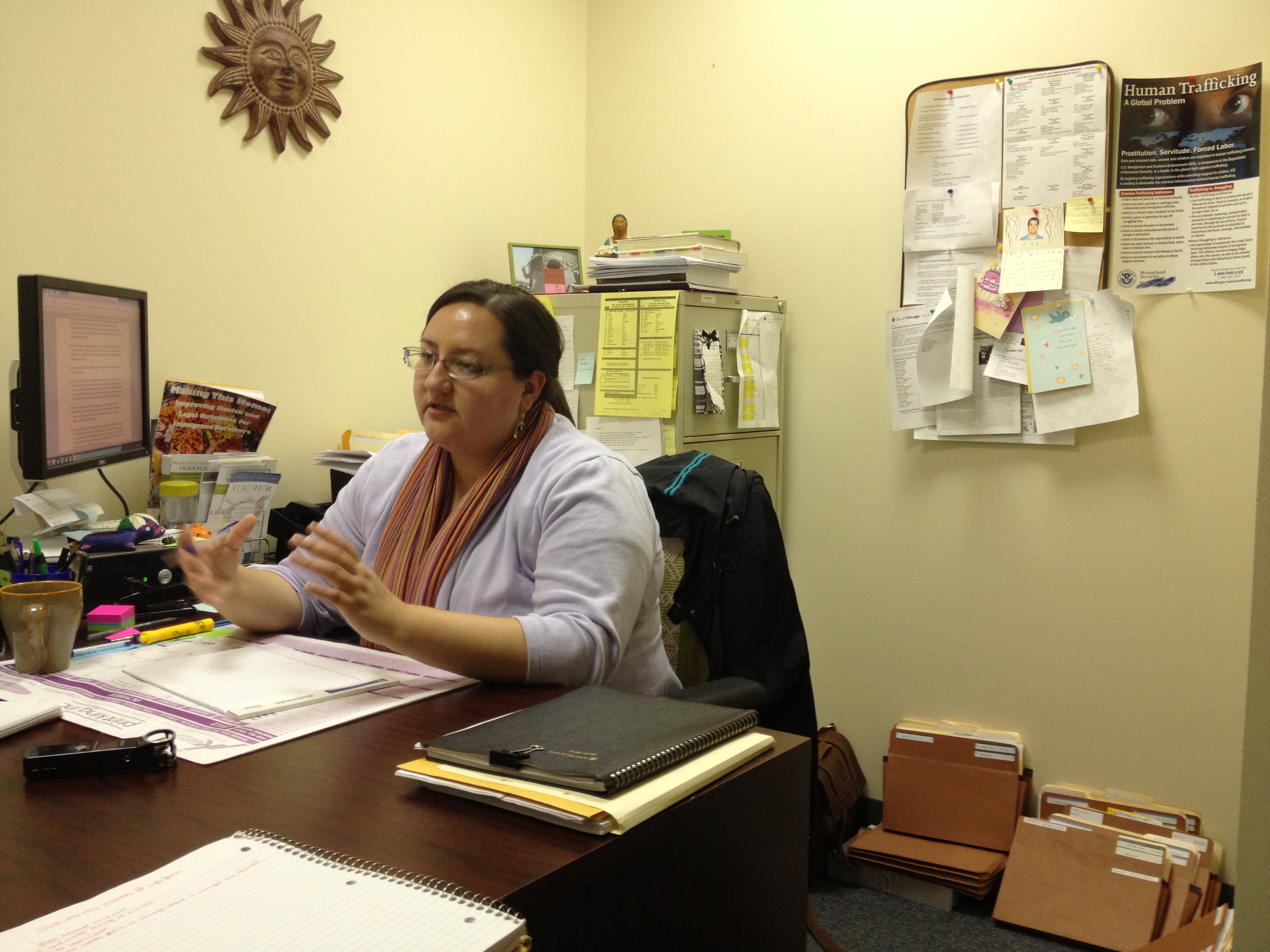 When Olivia Villegas introduces herself, she pronounces her name with an accent.

“Hi, I’m Ol-ee-vee-uh,” she said quickly, her slight Midwest accent morphing for one moment into that of a native-Spanish speaker.

Villegas, 29, is the only attorney at the LifeSpan Center for Legal Services and Advocacy, located in DePaul’s campus in downtown Chicago. She has been with the center since August of 2011, working exclusively with immigrant victims of domestic violence and helping them process U Visas and Violence Against Women petitions in order to eventually gain a green card.

The visa with which Villegas spends her workday (the DePaul law school graduate said she works on about 50 different U Visa cases throughout the year) plays an important role in the immigrant community in Chicago.

In response to a Freedom of Information Act request, the Cook County State’s Attorney’s Office provided data that indicated the county had approved 384 certifications for the U Visa since 2009. Moreover, the number of U visas issued to victims in Cook County has increased exponentially – five in 2009, 86 in 2010, 138 in 2011 and 155 so far in 2012.

The number of U Visas issued has increased, perhaps, because of the youth of the visa itself. The U Visa was created at the turn of the millennium and has only been in use since 2007.

In October of 2000, Congress established the Battered Immigrant Women Protection Act of 2000, designed, among other things, to combat human trafficking, strengthen the relationship between law enforcement and immigrant populations and fortify law enforcement’s ability to prosecute cases of domestic violence.

The U Visa was created under BIWPA, though the Department of Homeland Security did not release the visa’s official regulations, and therefore did not issue a single U Visa until 2007.

According to the regulations, in order for an undocumented immigrant to be eligible for the visa, the victim must be able to prove that she (an overwhelming majority of U Visa applicants are women) has suffered “substantial mental or physical abuse as a result of criminal activity” and has aided law enforcement officials in the resulting investigation.

Immigrants seek out advocacy agencies such as the one Villegas works for in order to get their application for a U Visa ready to present to a legal entity, whether that be a judge, state’s attorney or police official.

Villegas said her primary job, after she speaks with her client multiple times to ensure her client is telling the truth, is to make sure her client has all of the necessary paperwork to present to the chosen law enforcement official.

After writing a statement that describes the original crime, an immigrant applying for a U Visa needs to fill out multiple different forms to prove she meets the requirements to receive the visa.

If the victim’s petition is certified, the visa offers a four-year period of legal status. After three years of U Visa status, the immigrant is then allowed to apply for a green card.

After an undocumented immigrant gathers the necessary documents, the next step is getting the U Visa certified, which requires working directly with the county’s law enforcement.

For this reason, Villegas is happy she works in Cook County, or more specifically, Chicago.

Villegas, who immigrated from Mexico with her mother and four siblings as an 8-year-old in 1991, said Chicago lives up to its historic reputation of being an immigrant-friendly city, in that getting U Visa certification is relatively easy.

“If it’s Chicago or Cook County, it’s pretty quick,” Villegas said. “As you get further and further out of Cook County, then it is more problematic.”

Villegas and Palumbo harbor easily detectable frustration towards DuPage County, in which both lawyers say it is extremely difficult to get a U Visa certified. But Cook County’s policy towards U Visas is notably different.

Boliker said for her, certifying a solid, defendable case is almost a no-brainer.

“It really has to do with the fact that, let’s face it, it is our job to follow the law,” Boliker said. “But it’s also something that we do for victims of crime, and it is very important.”

Boliker stresses the dual purpose of the U Visa, both so critical to the visa’s inception and definition that it is explicitly included in the 2007 regulations.

In addition to, “strengthening the ability of law enforcement to investigate and prosecute cases of domestic violence, sexual assault, trafficking of aliens and other crimes while offering protection to victims of such crimes,” the regulations state Congress’s goal was also to encourage law enforcement to better serve immigrant crime victims.

Sarah Diaz, a clinical instructor at the Asylum and Immigrant Law Clinic at DePaul University, agrees with Boliker in that in an immigrant-saturated city such as Chicago, the U Visa’s humanitarian purpose almost takes precedence over its benefits to law enforcement.

Diaz also said the differences between Cook and DuPage counties concerning the certification of U Visa statements exemplifies Chicago’s citywide attitude towards immigrants.

Diaz’s theory about why DuPage County does not certify U Visas is that victims sometimes decide to present their case after the case has closed, and therefore law enforcement gains nothing by awarding the immigrant a visa.

Diaz also said the divergent manners in which Cook and DuPage counties deal with these certifications is representative of Chicago’s history with immigrants.

“I think that is the juxtaposition that we see, groups like the Chicago police as opposed to counties that are maybe not as used to immigrant populations,” Diaz said. “Don’t get jumped in DuPage, get jumped in Chicago.”

Bernie Murray, Deputy Chief of the Criminal Bureau in the DuPage County State’s Attorney’s Office, held a position similar to Bollicker’s when he worked in Cook County. Murray said DuPage does not have an anti-U Visa policy.

“We wouldn’t come anywhere close to Cook County’s crime rate,” Murray said. “There are just much more pending criminal cases of all forms that also ties in with the fact that there are probably far more U Visa applications in Cook County than there are in DuPage.”

In DuPage County’s answer to a Freedom of Information request for statistics on U Visas submitted, approved and denied, the State’s Attorney’s office indicated that the county does not keep records on U Visas.

Murray attributes the lack of information on U Visas to poor record keeping, both statewide and municipally. He offers a simple solution: “It could be as simple as we’re not required by law to keep them.”

U Visas play a large part in the increasing national attention on immigration policy. Having expired September 2011, VAWA was up for reauthorization in 2012.

Congress reauthorized VAWA two previous times – in 2000, at the same time Congress authorized BIWPA, and in 2005 – without significant issue. But this time, the reauthorization has triggered a Congressional standoff.

In April, the Senate passed a reauthorization bill, the Leahy-Crapo bill, sponsored by Senator Patrick Leahy (D-Vt.), with bipartisan support 68-31.

One of the most important parts of the Leahy-Crapo bill was its increase in the national cap on U Visas.

The current congressionally mandated cap for U Visas is 10,000, meaning Homeland Security can issue a maximum of 10,000 U Visas each fiscal year. The Leahy-Crapo bill proposes to increase the cap to 15,000 because of the ever-increasing demand for the visas, as Cook County’s statistics demonstrate.

Boliker attributed the rise in U Visas both in Cook County and nationwide to an increasing awareness about the visa.

Palumbo agreed the increase in the demand for U Visas was natural over time.

“Because it took so long for the real U Visa to come out, it took awhile for people to understand what is this work in progress,” Palumbo said. “Now, it is a very established process and I think most people understand that if you meet the basic requirements, you have a good chance of getting it.”

But the House of Representatives passed its own VAWA reauthorization act in May, sponsored by Sandy Adams (R-Fl.). The House bill keeps the U Visa cap at 10,000.

One of the original reasons the House and Senate are in a VAWA stalemate is because the Leahy-Crapo bill included a revenue generating component, meaning the bill must originate in the House in order to pass.

A Senate Judiciary Committee aide said the House bill’s passage was viewed as a Republican political play more than anything else.

“The consensus in Washington at the time was that that bill was sort of done as a last minute political attempt done so that [the Republicans] could save face and say that they did something on the issue,” the aide said.

As of now, the House and Senate are at a stalemate on VAWA.

The aide said that not all bills with a revenue generating effect are so difficult to handle but because immigration is such a controversial issue, the parties cannot reach compromise.

“A lot of times [a revenue generating effect] comes up and the two parties and two chambers work together and they can kind of figure out an agreement to work with that, and the Republicans have just not let that happen,” the aide said. “You know, they don’t want it to look like we’re giving amnesty or citizenship to anybody that’s in this country illegally. What we’re really trying to do is make sure that battered women who aren’t citizens can get the same resources and the same help under the law.”

Though the conference committee does not actually exist, the Senate Judiciary Committee aide said Senator Leahy is talking to Republicans in an effort to move the bill forward by the end of the year.

“We’re really in crunch time right now – there’s just two and a half weeks left,” the aide said. “Right now there are fiscal cliff issues, lots of things on Congress’s plate, and we really feel strongly that this should be something that we approve. We’re trying our mightiest over here for the next two-and-a-half weeks to try and make this happen.”

Though the Judiciary Committee aide said it is hard to tell what exactly will happen to the U Visa at the end of the year, the aide is sure about VAWA’s outcome should a reauthorization bill not pass.

“We just have to start all over again.”