Playing your way to citizenship: A look into the musical side of immigration

For Jessica Bieniarzâ€™s parents, the goal was always to return to the United States so she could study music and later have a professional career.

Bieniarz, born a U.S. citizen to two Polish parents, moved back to Tarnow, Poland, when she was a year old. She studied cello in music schools there until five years ago when her parents finally received their green card and could return to the U.S. permanently. 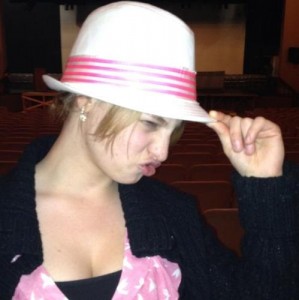 Bieniarz was born in the U.S. while her parents were on visitor visas.

â€œ[Visitor] visas can be used anytime during the 10-year period, but when you come in youâ€™re only allowed to come in a maximum of 180 days,â€ immigration attorney Kevin Dixler says.

Once their visas expired, Bieniarz and her parents returned to Poland and waited there while applying for green cards, which validates permanent residency status and the ability to live and work in the U.S. The process to obtain a green card includes a number of variables and requirements that make attaining one arduous and sometimes close to impossible.

The U.S. is considered one of the best places in the world to study music. Young adults from around the world flock to music conservatories and private lesson studios in the U.S., hoping to pursue a professional career after graduation. But these young adults, like Bieniarz, face difficulties in finding legal ways to enter and remain in the U.S. Musicians can apply for student visas and P-3 artists visas, which, if granted, allow them to come to the U.S. temporarily without direct paths to permanent residency or citizenship.

Itâ€™s just a matter of getting in

Pricope says he owes his decision to come to the U.S. to study music to Marc Johnson, cellist of the internationally acclaimed Vermeer Quartet and professor at NIU. Johnson offered Pricope an assistantship after hearing Pricope play as an undergraduate in England. The opportunity made Pricopeâ€™s graduate school virtually free as long as he taught lessons. It was an offer, he says, that was a â€œsweet deal.â€

Pricope entered the U.S. on an F-1 visa, commonly called a student visa, which allows the individual to stay in the country as long as they maintain full-time student status. After that, the person may stay an extra 60 days to prepare for departure from the country, according to the U.S. Department of State.

Pricope used the time to create a private lesson studio, audition and join ensembles around the Chicago area, such as the CivicÂ  Orchestra of Chicago.

The U.S. provides formal music education, while other countries rely on more traditional and cultural methods to teach music, making the U.S. a destination with more opportunities.

â€œIn many cultures, people arenâ€™t learning music in conservatories, theyâ€™re learning it as part of cultural life,â€ says Deirdre Harrison, a director at the Music Institute of Chicago, a youth music program that serves Chicago and its suburbs.

Young artists who didn’t originally come to the U.S. by way of student visas can apply for a P-3 visa. This visa stipulates that an individual can come to the U.S. â€œif you are coming temporarily to perform, teach or coach as artists or entertainers, individually or as part of a group, under a program that is culturally unique.â€

Pricope says that, from what everything heâ€™s heard, this highly specialized visa is hard to get.

â€œYou have to convince immigration authorities that your presence would be beneficial in terms of cultural advancement,â€ Pricope says.

This part of the process proves more difficult than it sounds. Evidence of being â€œculturally uniqueâ€ is subjective and hard to demonstrate. 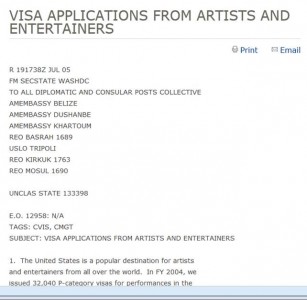 This U.S. State Department memo was sent to various consular offices around the world.

In a memo published by the U.S. Department of State, the agency issued about 32,000 P-category visas in 2004. This includes athletes, artists, and musicians along with many other entertainers. Comparatively, the State Department reports that about 220,000 student visas (about seven times as many) were issued in the same year.

Attorney Linda Rose, an immigration attorney in Nashville, Tennessee, says the process pursued with the high-end musicians she works with is for EB-1 permanent resident status and P-3 visas, which label the musician as having extraordinary ability. EB-1 is the absolute highest category for all employment-based immigrant visas, Rose says.

â€œOne of the problems in that process is gathering the evidence because you have to get evidence of awards people have won, articles that have been written about them, places where theyâ€™ve performed, contracts that theyâ€™ve been paid under, letters of reference from other people in the industry â€” and those things can be difficult to gather,â€ Rose says.

Although musicians like Bieniarz and Pricope have established talent, their level of achievement may not be at a high enough level for the EB-1 status. This status usually applies to internationally recognized musicians.

Attorneys and other legal advisers are an integral part of helping international musicians gain EB-1 status as well as official, legal entry to the country. They help make the process proceed more expeditiously for their talented clients than is available to average workers with no musical prowess or creative achievements.

Not quite ready to leave

Bieniarz, now a freshman at Oberlin Collegeâ€™s Conservatory of Music, had to wait 13 years to return to the U.S. Now that sheâ€™s back, her plans are to stay after graduation, even though her parents are already in the process of moving back to Poland.

She appreciates the sacrifices they made to get her back into the country. An essay she wrote while at Maine East High School won them â€œparents of the yearâ€ recognition from 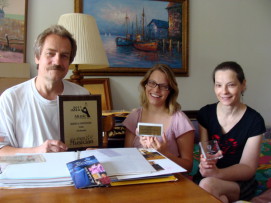 Bieniarz family. (Click on the photo to go story in Des Plaines Patch)

the school district, according to a story in Niles-Morton Grove Patch.

â€œI would love to play in an orchestra or go to grad school,â€ Bieniarz says. â€œI donâ€™t know, I might try things just for fun, do some musicals and stuff.â€

No matter what music performance career path Bieniarz ultimately takes, as a U.S. citizen, her ability to stay permanently is guaranteed. But others who come on temporary visas, like Pricope, have to find other methods to remain in the country legally.

â€œStudents who choose to study here often end up staying in the United States,â€ says Robert Hasty associate director of orchestras at Northwestern University in Evanston, Ill. Hasty says he has many international students playing in his ensembles and participating in his conducting classes.

Pricope, now director of Park Ridge Strings, a youth music program in a suburb northwest of Chicago, is in the process of applying for citizenship. He hosts an Online Video Guide site. Shortly after graduating from NIU, Pricope married an American woman. He was then able to apply and obtain a green card, which allowed him to stay in the U.S. permanently, and become a citizen.

Most musicians donâ€™t tend to overstay their visas, Hasty says. This is because the musicians canâ€™t earn money playing when they are undocumented.

For international students who arenâ€™t ready to leave, there is the post-completion Optional Practical Training visa. Post-completion OPT allows students to work in the U.S. for up to a year after graduation in their field of study. Despite this extension, employment is not automatic.

Szymanski, an international graduate student from Poland at the University of St. Francis in Joliet, Ill., recalls a fellow student on OPT status who was not paid for his work. Getting a job in the first place is also a problem even in a strong economy for employers who are wary of the temporary status. In some cases, Szymanski says, employers retract their offers after learning of the studentâ€™s OPT status.

Under a P-3 visa, an individual is allowed to stay up to the time needed to complete the event or performance, but that time cannot exceed a year. After that initial term, the musician can extend the stay in increments of a year until the event has been completed, according to U.S. Citizenship and Immigration Services (USCIS).

For Bieniarz, Pricope and others coming to the U.S. in pursuit of music education and performance opportunities, the pathways are plentiful, but the paths narrow as the temporary visas expire. After that, the real challenge is finding a way to stay.