Feeling at home, far away in Bolivia 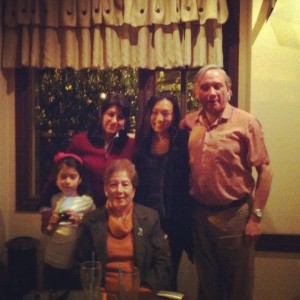 I pressed a cloth napkin into my lap and looked up to a table full of strangers. Â The odd thing was, they didnâ€™t feel like strangers. Â Maybe it was the warmth of Roberto Teranâ€™s handshake when he picked me up near my homestay apartment in Cochabamba, Bolivia, or the showers of wet, lipstick-stained kisses on my cheeks as Robertoâ€™s mother, sister and niece embraced me in the lobby of the restaurant Paprika where he took us all out for dinner. Â Or perhaps it was the way they talked about my dad, the oncologist from Southern California, as if he were an old friend.

â€œOh, Doctor Nagasawa!â€ Roberto said my last name with gusto. â€œMy aunt Irma tells us that your dad is the most wonderful man!â€

These comments prompted animated nods from the rest of the table. Â I smiled and remembered a phone conversation at an Internet CafÃ© a few weeks earlier. Â After work at a local after-school center, I had decided to venture down Calle Santa Cruz, a loud, bustling avenue, in search of a NestlÃ© â€œSublimeâ€ chocolate square to satisfy my sweet tooth and balance out the copious amounts of salt in my new diet. Â It was July 2012, and I had been abroad on the Northwestern Global Engagement Summer Institute program for nearly a month. Â I decided to take a detour on my candy quest to make a call home.

â€œIâ€™m pretty sure one of my patients is from Cochabamba!â€ my dad exclaimed from the other end of the line. Â â€œIsnâ€™t that the city youâ€™re staying in?â€

Once my dad made the connection, e-mails were sent, plans were arranged and soon I found myself conversing over red wine with the relatives of a woman I had never met. Â Irma Jauregui had left Cochabamba after she was diagnosed with breast cancer the year before to live temporarily with her daughter Elizabeth, who had moved from South America to Costa Mesa, Calif., more than 20 years ago. Â Elizabeth served as the liaison between Irma and my dad, translating her motherâ€™s native Spanish into understandable English, and visa versa. Â At appointments, Irma would wax rhapsodic about life in her home country Boliviaâ€”its temperate climate, the family she missed, how she could not wait to someday return to her beloved valley plateau after treatment concluded.

I imagined Irma sitting on the textured beige couch in my dadâ€™s office, working to fully grasp and understand her illness through her daughterâ€™s translations while my dad scribbled notes on his yellow legal pad. Â I could visualize the frames hanging above her, pictures of my childhood:Â  old Christmas cards, family vacations, elementary school projects. Â Â Outside the windowÂ  palm trees sway in the parking lot, and further away the streams of cars race up and down the Interstate 405 Freeway. Â Irma knew these places too.

As I attempted to share stories and discuss Bolivian politics with the table of unfamiliar faces that July evening at Paprika, my mind kept wandering back to the member of their family who was absent. Â I took a bite of pan and settled into the plush red chair. Â Iâ€™d keep that seat warm as conversation extended late into the night, knowing that someone on the opposite hemisphere was doing a similar favor for me.