Detainment: The struggle of those left waiting 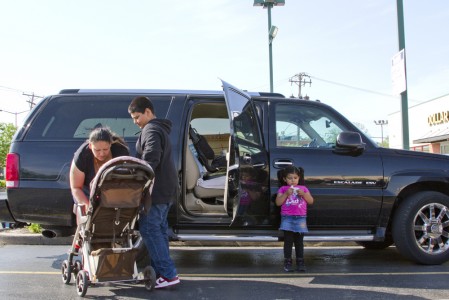 Without her husband around to support her, Zamora-Cisneros often has to handle her three children alone. Her 12-year-old son, Angel, helps out whenever he can.

Jennifer Zamora-Cisneros could not wait any longer to get her sonâ€™s hair trimmed. She had hoped that her husband would be there for their 2-year-oldâ€™s first haircut, but he was still locked up in a detention center waiting for a judge to decide in June whether he would be deported to Mexico. She waited day after day, but Sebastianâ€™s bangs started growing into his eyes.

The 33-year-old mother finally relented and brought him to the hair salon.

â€œI tried cutting it myself and it ended up so messy,â€ she said. â€œI wanted to wait for Jose to come home first. Heâ€™s missed so much already, especially during the holidays.â€

Jose Cisneros has not been home since December 2012. He missed out on Christmas, the coupleâ€™s 7-year wedding anniversary, and two of his childrenâ€™s birthdays.

With a pending deportation, no one knows when Cisneros can be with his family again. The father of three is an undocumented immigrant who committed a felony in 1997, and has been detained for six months after his arrest for illegal re-entry into the United States.

Zamora-Cisneros can only wait for her husbandâ€™s phone call each night, and hope.

Crime complicates the cases of many undocumented immigrants. Whether Cisneros deserves to be removed from the United States or not is debatable, but the impact that his pending deportation has on his family is not.

Â His detainment left Zamora-Cisneros to live like a single unemployed mother, struggling to hold the family together. Detainment and deportation removes many sole income-earners from family units, and financial burdens fall heavily on the ones left behind.

â€œAfter he got taken, it was devastating because my whole life crumbled,” said Zamora-Cisneros. “I wasnâ€™t able to take care of my kids.”

The removal of parents from families with varying legal statuses is not uncommon: Cisneros is undocumented, but Zamora-Cisneros and the children are U.S. citizens. A report by the Department of Homeland Security states that more than 100,000 undocumented parents of U.S. citizen children were removed between 1998 and 2007.

Â â€œI had to get rid of a lot of stuff. I had to move from my house. I had to sell my jewelry to survive,â€ Zamora-Cisneros said. â€œI didnâ€™t know how long he would be gone and I thought they would deport him either way.â€

Â Cisneros was the only breadwinner of the family while he held a steady job as a warehouse painter. Without his income, the family was forced to move out of their two-bedroom house two months after his arrest.

Â â€œItâ€™s been really hard with the kids because he helped me a lot,â€ Zamora-Cisneros said. â€œA lot of fathers donâ€™t do stuff. Jose would cook. He cleaned. He changed pampers.â€

Â The family now lives in a single room in her parentsâ€™ home in Aurora, Ill. While the children had to adjust their sleep schedules according to their grandfatherâ€™s night work shifts, Zamora-Cisneros had to get used to living under her parentsâ€™ roof again.

Â â€œAll this is hard because she had her own house for so long,â€ said Dana Zamora, Zamora-Cisnerosâ€™ mother. â€œWe try to help, but god I wish Jose would come home. Then they can get their life back.â€

Despite receiving support from her parents, in-laws, and extended family, Zamora-Cisneros struggled to pay the bills. Her job search has been futile. 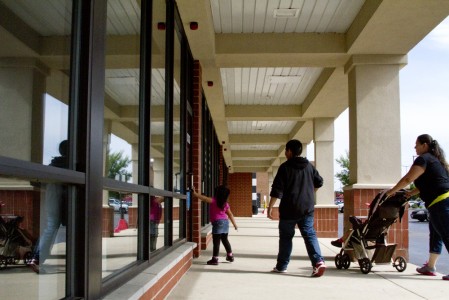 Zamora-Cisneros takes her three children to their dentist appointment. When she is busy pushing 2-year-old Sebastian in the stroller, Giada steps up to help in small ways – the young girl is always first to open the door.

Many women whose husbands are held in the immigration detention system are struggling to survive. Enlace Chicago’s Associate Director Katya Nuques said that the issue is prevalent in Little Village. The organization seeks to serve the pre-dominantly Latino neighborhood by creating opportunities for local community members.

â€œI know a mom who is trying to support six children,â€ Nuques said. â€œIncome becomes a big issue when the familyâ€™s income-earner is gone.â€

Nuques calls Chicago the â€œMexican Midwestâ€ because of the many Mexican immigrants who settle in the city. Yet, despite Mayor Rahm Emanuelâ€™s effort to try to make Chicago the worldâ€™s most immigrant-friendly place, deportation leaves many families torn apart and poor.

Family is what motivated Cisneros to take a risk and re-enter the country after his first deportation. Family is also what pushes Zamora-Cisneros to fight against her husbandâ€™s second deportation.

â€œMy husband did get deported and came back again, but why is he wanting to come back? Thereâ€™s something here he needs to be a part of,â€ she said.

After being transferred through multiple facilities, Cisneros is now in the Kenosha County Detention Center. The only thing keeping him from being deported is his reasonable fear of being in Mexico. Cisneros was kidnapped and extorted by the Mexican police after he was deported in 1999. They threatened to kill him if he told anyone about the incident.

Â Htun said on New Yearâ€™s eve this year, Zamora-Cisneros came to her in tears. They spoke on an emergency case basis, as the court had the authority to deport Cisneros immediately on the next flight if he did not have legal representation.

Not everyone expresses the same sympathy. For some, the issue is clear. Eric Ruark, director of research for Federation for American Immigration Reform, said rehabilitation does not fully justify vacating an undocumented immigrantâ€™s deportation, because entering the country illegally is already a crime. The federation is a non-profit organization committed to stopping illegal immigration through immigration reform.

â€œAny undocumented person who committed a felony should definitely be deported,â€ said Ruark.

Cisnerosâ€™ case is particularly complex because of his re-entry after his first deportation. In fact, illegal re-entry was the most recorded charge brought by federal prosecutors in immigration cases during the first half of 2011, according to research by TRACâ€™s Immigration Project. While illegal entry is classed as a petty misdemeanor, illegal reentry is a felony offense. Felonies are punishable by a term in state or federal prison or death.

â€œCommitting crimes means you have to deal with the consequences,â€ Ruark said. â€œYou donâ€™t get a free pass.â€

Htun will still fight to get Cisneros a pass out of prison and back to his family. She now has one last option in court, to argue for a withholding status. According to the U.S. Citizenship and Immigration Services, immigrants can apply for withholding if they are likely to face persecution or torture when they return to their country of origin.

â€œBut being under withholding is a disadvantage. You donâ€™t get citizenship or a green card. You can never adjust your status,â€ Htun said.

Despite the drawbacks of being without status for the rest of his life, Htun said that Cisneros is willing to live under such restrictions.

â€œHe can never travel, because he may not be allowed to come back,â€ Htun said. â€œBut thatâ€™s all he wants.

â€œAll he wants to do is stay here with his family.â€

Six months has passed since the Cisneros family last shared a meal at the same dinner table. While their father was gone, 12-year-old Angel has played in multiple baseball games, Giada had her fourth birthday party, and baby Sebastian learned how to talk.

Much change has happened, but the familyâ€™s love for Cisneros remains constant.

â€œMy youngest son is only two but he still remembers his dad,â€ she said, stroking Sebastianâ€™s now neatly trimmed hair as he sits on her lap. â€œHe always wants to look at my phone to see his picture. He misses him so much and is really close with my husband â€“ all my kids are.â€ 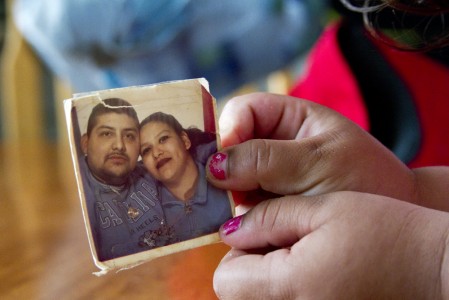 Four-year-old Giada holds up an old photograph of her parents when they were still dating in high school. The couple have been together since they met in East Aurora High School when Zamora-Cisneros was 15.

Having to juggle her role as a mother, daughter, and wife without her husband has taken a toll on Zamora-Cisneros. She is constantly on the run, sending her children to and from school, and always searching for coupons and promotions to save money. More than not, she simply misses the man she has been with since she was 15-years-old.

â€œMe and Jose are really close. Yesterday was our 7-year wedding anniversary, but he wasnâ€™t there to share it with me,â€ she said.

Â On June 5, Judge Eliza Klein of the Chicago Immigration Court ordered that Jose be deported to Mexico.

Â â€œI know he doesnâ€™t have papers. But if he got deported, and came back, and was still doing bad things,â€ she said. â€œEven though I love him, I would say that he doesnâ€™t need to be here. But itâ€™s been so long since Jose did bad and heâ€™s already paid his dues for it.â€

Â Zamora-Cisneros said she would fight for her familyâ€™s reunification no matter what. With her and the childrenâ€™s statuses as U.S. citizens, it is also possible for her to apply for an immigrant visa to keep Cisneros in the country. If not, she said she would be willing to uproot her entire family and move to Mexico to be together with her husband.

Â â€œI wouldnâ€™t allow his deportation. Even if heâ€™s locked up, we still got a chance,â€ she said. â€œI need him back.â€

Â â€œThis place is all I know because Iâ€™ve never lived nowhere else but here. But thatâ€™s the love I have for him, you know. I told him â€“ wherever you go, I will follow you.â€