That first meal with the family

“What do you even know about Indian parents? You’re sitting down with her family in less than three hours…” Vivek alarmingly responds to my confident declaration. He is right. I really know nothing about Indian parents, but I try my best to shrug off his comment in an attempt to remain calm. Yet I am well aware that I, Justin Deffenbacher, the tall lanky white kid from Nebraska, am about to enter a situation not only well beyond my social capabilities and completely unprecedented. That evening I would be sitting down with the parents of my longtime girlfriend, Priyanka.

Normally, parents aren’t a problem. Frankly, I’m a bit too talkative and outgoing on most occasions. However, my naïve nature was overcome with the apprehension that Priyanka and her parents are immigrants from Pune, India. After collecting my thoughts and attempting to sarcastically reply to Vivek’s question I realize I needed his help. I begin hurling question after question about Indian parents, dating, customs, clothing choice… you name it. His responses aren’t comforting. His take is that Indian parents will not be the least bit enthusiastic about their daughter dating me. As the Q and A session continues, my skin grows ashen and my heart begins to beat as if I were sprinting the last leg of a marathon.

After exhausting my list of questions, I head out to my car and begin to prepare for the worst. I sink slowly back into the driver’s seat of my Honda Civic, nervously drumming my fingers along the steering wheel. It’s a cold January evening in Nebraska, and the exhaust from the car in front of me drifts into a frozen mist in the night air. I, however, have my window fully open as I use the cold to keep me somewhat collected.

What seems like seconds pass and I’m sitting at a stoplight down the street from her house, breathing erratically and shifting my collar from side to side. As I wait, hoping that the light will remain red, it suddenly shifts to an ominous green and my car inches towards the intersection. I manage to drive the last quarter mile to her house and park my car in her driveway.

I unbuckle my seatbelt, open my door, and take deep breaths. As I walk to her house each step becomes heavier until I’m standing in front of her door, knocking timidly. Moments later I hear the door creak open slowly. I put on my best fake smile, trying desperately to hide how nervous I am.

Her father steps out wearing a pressed suit and solid black dress shoes that make my wrinkled Chaps shirt seem out of place. I put out a shaky hand and her dad does the same, breaking the silence by saying in a thick accent, “Well you’re the kid who wants to date my daughter,” in a thick accent.  I smile nervously and respond with the “Yes Sir” that my grandparents had drilled into me as a child.

Just as my inner monologue is rattling off all the ways this could go wrong, he bursts into laughter. 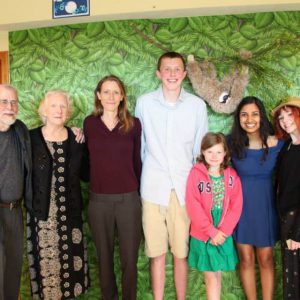 “Honestly I don’t know if I could keep this up much longer,” he states in a crisp American tone. “I’ve always wanted to try the strict dad thing, you know?”

At this point I can’t tell exactly what is going on. He continues. “You can relax you know, Priyanka says you check out.”

I breathe a sigh of relief and a little color returns to my pale face.

However, through dinner as I sat across from the man whom I had spent the prior day frightened to meet, something continues to gnaw at me. As a journalist I do my best to enter every story and encounter without the biases that can impact the way I tell my stories. Instead of treating this encounter with the usually awkwardness that I meet parents with, I had compromised who I was because of a preconceived notion.

After I shake his hand a final time and say goodnight to Priyanka, I climb back into my car and start the engine. Just as I am about to leave, her dad calmly walks out of the house and stops next to my window. He asks if I have a moment to talk. He mentions how he had not been fully honest and that he had been a little uneasy about his daughter dating me, but after our dinner he said, I had indeed “checked out.” The fact that we shared similar doubts displayed how, despite our differences, we had more in common than my bias had let me believe.