Do immigrants change their names more than others, and more than they once did?

Rodrigo Saldago slowly raises his hand, reciting the oath read to him and about 40 other immigrants in a packed courtroom at the Dirksen Federal Building in downtown Chicago. Within minutes, the 20-year journey that had taken Saldago from a small town in Mexico to Chicago is complete. He is now a U.S. citizen.

“I can’t even begin to describe how I feel. There has been a lot of time and sacrifice to get me here, Saldago said. “This is it. I’m fully here and I’m all in.” 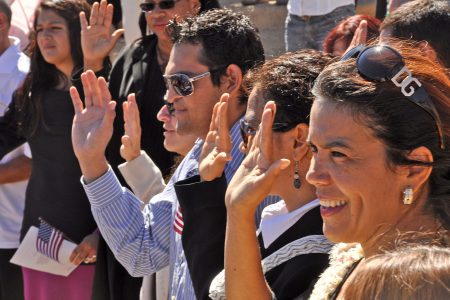 At the end of the ceremony, Saldago hoists the freshly signed document signifying his status. One prominent change is clearly visible. Rodrigo Saldago has been changed to Alexander Valentine. With his new citizenship, Saldago (now Valentine) decided to change his name to fit his new American identity. Immigrants are afforded a unique opportunity to change their name during their naturalization, which allows them to connect with their new American identity.

“Changing my name is really the end of the circle. After 20 years of being an immigrant, I am an American and I wanted a name that now fits who I am, one that allows people to see me for who I am,” Valentine said.

Immigrant name changes have a long history in U.S. culture, beginning with the era of mass immigration in the late 19th century. The logic was straightforward: change your name and avoid discrimination. Boston College immigration psychologist Pratyusha Tummula cites the discrimination that specific immigrant groups faced as the primary reason for name changes.

“[It] often started with religious identity. Many Jewish Americans changed their names in the face of discrimination. In general it really just comes down to a group being marked as other,” Tummula said.

Now well beyond the era of Ellis Island, where name changes were commonplace, changes now are on the decline, according to the United States Citizenship and Immigration Services (USCIS), but have a similar significance for incoming immigrants. As the child of immigrant parents, immigration lawyer Tammy Lin experienced first hand the effect of culturally different names.

“Historically it is a lot easier to have a life in the U.S. with an American name. It doesn’t matter if you are Asian or Middle Eastern. It’s an easy way to assimilate in the American culture, said Lin. “Growing up as immigrants in Texas, my father’s first name was Chinese but he told people his name was Jason. There was no expectation to pick an American name, but people are much more accepting of that name.”

Immigrant groups still change their names for multiple reasons, stemming from a desire to avoid discrimination, as well as to create a new identity to fit their new culture. In addition immigrants have a unique opportunity to change their name when naturalized, creating an opportunity to start a new life with a new name. Data from legal Zoom, a legal data collection agency, lists ethnic-related motives as one of the top ten reasons why people change their names.

“The most common thing that I see on name changes [for immigrants] is that it is just for convenience. But it’s not uncommon to see other reasons. It depends a lot on the person, their age, if it makes life easier, if they will be perceived as an American,” Lin said.

Economically, immigrants still benefit from changing their name. A study conducted by economists at the University of Chicago and Harvard indicates that resumes with more white-sounding names receive far more callbacks. Valentine was heavily influenced by the impact that his name would have on job prospects and his earning potential.

“I don’t want to be seen as Pedro, or Pablo, or another Hispanic name. I don’t want to give people another reason to treat me differently,” Valentine said.

Although name changes still occur in order to avoid being labeled as “other,” these changes are less effective for the large immigrant populations of Latin America, Africa, and Asia for whom physical differences create separation.

“If say a person of a different color changes their name, when people see them their name won’t matter. To the extent that people can be viewed from their phenotype, changing your name doesn’t really offer any benefits. If you are identifiable by your race, you are still going to be seen that way,” City University of New York Sociologist Nancy Foner said.

Cultural pride is a factor that has limited the number of name changes. In fact, a relatively new trend has emerged, countering traditional practice, in which immigrants and their descendants have begun to change their names back to retain their ethnic identity. In addition, programs such as affirmative action have turned ethnic diversity and names into an advantage.

“Sometimes there is an attempt to bridge the two cultures. It’s about choosing names that reflect their identity. A connection to their culture of origin shows how immigrants are working through their sense of belonging. These binomial identities allow immigrants to navigate across cultural and racial contexts,” Tummula said.

Valentine faced similar pressures from relatives and the Hispanic community to retain his birth name.

“A lot of people have asked if I am ashamed of my roots. I think that it’s a societal misconception that our race and roots primarily define us,” Valentine said. “My name doesn’t make me. It doesn’t determine how I live my life.”

The perception among immigrants, that to get ahead in America they need to change their name, is dangerous to Chicago immigration attorney William McLean. Mclean cites the importance of America’s diversity as an argument against name changes.

“When people start talking about how it’s easier to assimilate to American culture by changing your name, I stay away from those conversations,” McLean said. “These assumptions are racially and prejudice tinged. I don’t think it’s our business to tell people from other countries who are immigrating here what to do. Those kind of [presumptions] are poisonous.”

While immigrant name changes have decreased in the last decade, the internal conflict facing incoming immigrants who consider changing their names is one that Valentine believes is now more relevant than ever.

“This election cycle has shown our country’s true colors. Racism is still a very real thing in this country. You can see it everywhere. It’s something constantly in the back of my mind. My previous name was just another limitation that I was able to remove,” Valentine said.