Are mental health issues more of a problem for immigrants than for others?

She made the trip from Columbia to the United States, but she barely speaks English.

She’s enrolled in school, but can’t focus — she’s grieving her life back home.

She slept last night, but seems tired every day. She misses her dad who is still working in Columbia.

“I knew she needed professional support,” said Sarah’s first-grade teacher. “A lot was going on in her world.” 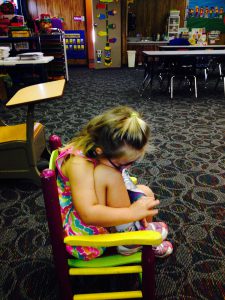 Sarah needs help for depression, but as an immigrant, help was hard to find.

Immigrant populations and their children face an alarming number of risk factors for mental illness. Yet their minority and citizenship status can limit their ability to receive the services they need most.

While mental illness arises from a combination of genes and environmental factors, circumstances play a crucial role, said Michael Zárate, a member of the 2011 American Psychological Association Presidential Task Force on Immigration.

In particular, most undocumented immigrants are born into extreme hardship, adding on layers of unparalleled challenges and pressures as they age, said Zárate.

Although diverse, the undocumented population tends to be poor, often fleeing economically ravaged areas, according to a report by the Center for Immigration Studies. And the poorer one’s socioeconomic conditions are, the higher one’s risk is for mental disability, said Zárate.

“It’s hard to have what people think of as an average middle-class life as a poor immigrant,” said Zárate. “When you possibly live in a garage, work three jobs, share a one-bedroom apartment with four other families — that leads to mental health problems. There’s a strong correlation between your living conditions and your mental health functioning.”

Additionally, the path of migration is often risky and stressful, especially for the undocumented. Exploitation by smugglers, victimization by criminals, the death of family members, and the fears and reality of apprehension by U.S. border patrol can cause severe trauma. Left untreated, such distress can develop into post-traumatic stress disorder, anxiety, depression, and a host of other psychiatric disorders, according to a report by the American Psychological Association.

An unexpected contradiction surfaces in the US

Once in the United States, the battle only intensifies. Immigrants and their children will likely confront pressures of acculturation, financial instability, language barriers, xenophobia and discrimination — each an active contributor to the development of depression and anxiety, according to the APA.

However, psychologists’ research has documented an unexpected contradiction.

First-generation immigrant populations demonstrate the best performance in behavioral and mental health, followed by a decline in subsequent generations, according to the APA report.

“When you compare them to other groups, immigrant children and immigrant parents tend to be rather resilient,” said Krista Perreira, Associate Dean of the Office of Undergraduate Research at the University of North Carolina-Chapel Hill, who studies the health consequences of migration. “It is the U.S.-born immigrant children that are at higher risk for depression and anxiety.”

While not completely understood, part of what experts believe causes this disproportionate outcome is the health of the entire family unit. Parents dealing with trauma have less capacity to nurture and help their children, who are also adjusting to life in the U.S., said Perreria.

In conjunction, children may find it difficult to live with the expectations and demands of one culture at home, and another at school, said John W. Berry, a Queen’s University professor working in the field of acculturation psychology.

“Children may not turn to their parents with problems and concerns, believing that their parents do not know the culture well enough to assist or are already overburdened with the multiple stresses of resettlement,” said Berry.

While second and third generations may face a greater risk for mental illness, the immigrant population as a whole faces a set of unique psychiatric risk factors — factors that should receive professional attention and care, said Zárate.

Undocumented immigrants have it worse

However, precisely the label that can cause mental health problems — an “undocumented status” — can also prevent someone from receiving treatment at all.

But there are exceptions. Some states offer insurance similar to Medicaid regardless of immigration status, such as California’s Medi-Cal. Others can access treatment through employer-based health insurance, student health plans or community health centers.

However, most immigrants will not receive mental health care until the situation becomes dire, according to the National Immigration Law Center.

“Immigrants and minorities are underrepresented in the mental health field in the treatment of problems that don’t require hospitalization,” said Zárate.

This often means doctor’s offices are turning away those who are suicidal or could cause harm to others, said Zárate.

“Someone walks into a physician’s office suffering from a psychotic breakdown and the first question you ask them is, ‘Do you have insurance? Did you bring your card?’ That’s not right,” said Zárate.

The nature of psychiatric disorders can create a loophole, however.

Hospitals often provide immediate emergency care to patients suffering from physical trauma, such as a broken leg or bleeding wound. Because mental illness is usually invisible even when life-threatening, emergency care may be denied or seen as unnecessary in some cases, says Zárate.

The best option is to find treatment before symptoms become severe, and if possible within a culturally competent health care system, said Luzely Avila, a registered nurse in Chicago.

Avila said “culturally competent” programs are designed to take into account a range of culturally specific behaviors and can be responsive to the mental health needs of ethnic minorities and immigrants. One example is Alivio Medical Center, where Avila works. This community-based health center in Chicago focuses on serving the Hispanic population and retains bilingual and bicultural clinicians.

Otherwise, clinicians who are not culturally competent are likely to make errors in assessing a patient’s behaviors. While some actions are blatantly harmful, said Suarez, many other determinants of mental health, like feelings of well-being, are subjective to cultural influence.

“If we go by the criteria and classifications that we use in the U.S., and think they’re universal, we’re already off on the wrong foot,” said Zárate.

Awareness has sparked the establishment of local, state, and federal guidelines for the delivery of culturally competent services, especially within The U.S. Department of Health & Human Services and its state-based agencies. And a host of professional organizations, including the National Association of Social Workers and American Psychology Association, have made changes to their policies regarding culturally competent care.

While small, this shift in perception could result in increased access to mental health care for immigrants, despite their citizenship status, said Zárate.

For Sarah, access could mean the difference between finishing school and dropping out. Her future, like many other immigrants’, depends on receiving treatment.

“Our society can do it,” said Zárate. “Once we say ‘I am my brother’s keeper.’ Once we stop defining our brother as someone who looks exactly like us — we can change things.”