[See sidebar: It’s all in the name: Lee and Lee Family Association of Chicago]

Jeremy Yuan-shuo Li sits in his office, looking out the window at a bustling Chinatown, which is a tourist attraction for young people. It is the middle of the day. However, in his office just above the street, young people are the major concern of Li.

“How to get more young people to involve is the biggest problem we face now,” Li mentions more than five times during the interview. He is the president of the Lee Family Association of Chicago.

The association was founded in the 1960s by a group of people who came to the United States from the province of Canton in south China. Apparently, they all had the surname of Lee (or Li). The association was initially established so that members could help each other and new immigrants get used to life in America, which was hard for first generation immigrants who were poor and did not speak English.

Lee is the second most common surname in the Chinese cultural sphere, after the surname of Wang, according to the Chinese Public Security Bureau Statistics in 2012. While Lee is a more traditional spelling, mainly used in Hong Kong and Taiwan today, Li is the modern version of spelling mainly used in the People’s Republic of China.

“Almost every major city in the U.S. has similar associations of the Lee family,” says Li. “Basically they all have the same origin and most members are from south China.” 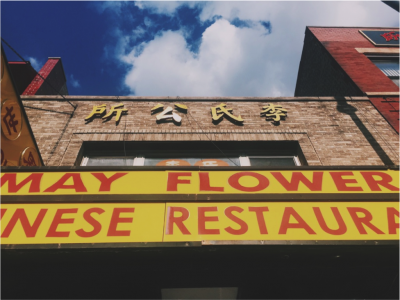 After nearly half a century, the Lee Family Association offices sit in stark contrast to the energy of Chinatown itself. Going up to the second floor through a dark, narrow staircase that fronts on South Wentworth Avenue (the Chinese translation of the street name is “the road of longevity”), the first view is an ancestral hall. Fruits and flowers are placed together with red candles on a long table in front of huge  traditional Chinese paintings and calligraphies on the wall. There are no other lights in the ancestral hall, and even in the middle of the day, it looks somber and misty. The aroma is a combination of candle smoke, old wooden floors and strange ointments.

Li’s office sits just across the hall beside the window. It is the only bright place in the building.

His office is not old. There are computers, air conditioners, and many printed-out notifications, agendas, and posters on the wall – all in traditional Chinese characters.

“We will have the annual celebration meeting of graduates in July,” says Li, “and that is the most significant time when we meet young people, reaching out to them and letting them know the association.”

The celebration is open to all Chinese students in Chicago who graduate either from colleges or from high schools. The only requirement is that the student needs to have the surname of Lee.

Li himself first came to the association with his father after his graduation from college in the late 1990s.

“When I first came, I also thought this place was weird,” he says. 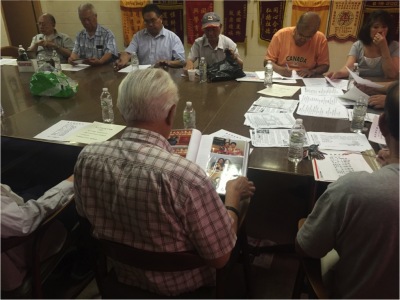 A member looks at the activity album at a spring festival banquet. (Photo: Yi (Julian) Cao/MEDILL)

“However, after a time, I found that people here were nice and caring, not as cold as I thought. So I decided to do more, and eventually, to stay.” Obviously, Li expects more people like himself, which is not easy.

“You cannot ask everyone to be like you,” says Li, “Trust me, most people will be scared at their first sight, ha-ha!”

Li likes to laugh. From his words, it seems that getting more young people involved in the association is an urgent and important mission, but the way he says it makes the issue sound hopeful, even joyful, but unfulfilled.

“Many people,” Li believes, “are taken aback when they first come here, seeing all these old and even mysterious stuff and guys.” It is true. The clicking sound of a group of old man playing mah-jong (a traditional Chinese gambling game) in the room next to the ancestral hall remains throughout the interview. It is a familiar sound.

Though a traditional game, mah-jong is played by people in all ages in China.

Li wants to make the Lee Association like mah-jong, welcomed by both old people and young people. “Traditional activities and events are important,” he emphasizes.

Nevertheless, the Lee Association of Chicago still has a long way to go. “I have been to Lee Family Associations in San Francisco and Seattle,” says Li, “and they do a wonderful job. Young people will come to the office everyday for coffee with their friends and colleagues.” 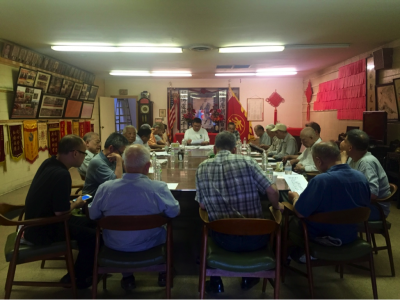 The association is having its quarterly committee conference on May 29, 2016 in its ancestral hall. (The one with the white T-shirt in the middle is Jeremy Li, president of the association. (Photo: Yi (Julian) Cao/MEDILL)

mission for Li. The Lee Association of Chicago holds a quarterly committee conference.

During the conference, lights in the ancestral hall are turned on. Members sit at the huge table in front of the calligraphies and ancient paintings.

The 22nd National Lee Family Conference will be held in New York City this summer from August 19-24. People and leaders will communicate their work and future plans for the Lee family in the U.S. Li has a lot to learn from other Lee Associations about how to attract young people.

“However, the association is a really welcoming place,” says Li, “and we are doing our best to make [young people] comfortable.” The sub-committee of youth was established years ago. The young people now work either part-time or full-time for the association.

“They have a WeChat group,” Li says, “and there are people from various places in China, Hong Kong, and Taiwan, some of whom only speak English.” People with other surnames also work for the association.

“Some of them are like girlfriends of Lee boys,” Li laughs. However, these young people with other surnames cannot become members of the association’s board of directors.

“We are still pretty exclusive on this,” says Li. “South China is still the origin of most of the members. It is only during the last couple of years that Lee people from elsewhere come into the association.” Communications with other family and regional associations and organizations are “mostly based on private connections,” and the only place where “everyone meets together” is the Chinese Consolidated Benevolent Association of Chicago.

CCBAC was established in the 1880s. It helps new immigrants get citizenship, assists families that have difficulties with English, teaches more than 400 children Chinese, and provides daily free lunches for poor old people. Currently, it is the head of more than 30 associations, including the Lee Association in Chicago.

Although it owns a building and is planning to build a new office building in the next four years, CCBAC has only three full-time staffers.

“Having no young people is a problem faced by every Chinese organization in Chicago,” says Peter Chen, one of the full-time staff in CCBAC, “and we are not an exception.”

“Politically, we are standing for the Republic of China,” says Chen, “and it means that we have zero interaction with groups from the mainland.” According to Chen, CCBAC is not “politically biased.” The problem is that “old people do not embrace the mainland because they hate the Communism government.”

Indeed, most traditional organizations in Chicago’s Chinese community share this attitude. There is not a clear line drawn between Taiwan and the mainland, or between the Communist Party and Republic Party, and many of them even claim to be open to any people to join them. Even with this seemingly liberated atmosphere, connections between the two sides are still extremely weak.

The CCBAC is also a major contact place for the Taiwanese American Chamber of Commerce of Greater Chicago. Established in 1988, TACCGC is an association for businessmen whose roots are Taiwanese. It also holds cultural and sports activities every year.

It faces a similar problem to that of the Lee Family Association.

“I think the entire trend of either Taiwanese doing businesses in Chicago or ‘new blood’ entering TACCGC is withering,” says Jiun-Giang Lin, vice president of TACCGC. Since the financial crisis in 2008, the number of Taiwanese businesses in Chicago, and throughout United States, has experienced a continuous downturn.

“With fewer and fewer business opportunities,” says Lin, “many young people and students go back to Taiwan after they finish their studies here.”

Compared with the Lee Family Association, TACCGC is more exclusive regionally. Although both Lin and Tim Chen, the president of TACCGC, emphasize that the association is a purely “business organization, not a political one,” it is relatively hard to reach out to people outside of a Taiwanese background.

It has almost “zero contact” with other regional associations in the Chicago Chinese community.

“Among all the directors, we only have one who is from Hong Kong,” says Lin. “There is no member from the mainland or Southeast Asia.” However, Lin mentions that the chamber welcomes people from everywhere as long as he/she “is from Taiwan or RECOGNIZES Taiwan.”

“The word ‘recognize’ is not our invention,” says Lin. “It derives from the charter of the Taiwanese Chambers of Commerce of North America, TACCGC’s mother organization. So I believe it should be a political recognition, but again,” he says, “we are not that political.”

Like the Lee Family Association, TACCGC also has a division to reach out to young people. “The Junior Chamber is where we develop young businessmen, even students, and let them know about TACCGC,” says Lin who is part of its mentor program.

“It is basically for a closer connection so that I can help and teach my mentee and make him familiar with ways to start a business here in Chicago,” Lin says.

For family and regional associations like the Lee Family Association and TACCGC, how to get young people is a constant problem that Li, Lin and the groups know they need to face. Time moves on, and they know well that it is no longer their generation’s time. Failing to get “new blood” can lead to a dangerous future – a disunited Chinese American community in Chicago.

Next to the ancestral hall in the Lee Family Association of Chicago, the crackling sound of mah-jong continues. This game has a history of more than 150 years, and it is quite popular even among young people nowadays. Maybe the game symbolizes the combination of traditional spirit and modern attractions.

Making these associations like mah-jong? People are stil trying to figure that out.

*All the interviews were conducted in Chinese, and the quotes are translated.