There’s no wall from Trinidad or is there?

“How are you feeling, Merle?” the hospital nurse asks as she enters the room. I watch as the nurse checks Merle’s vitals in order to make sure everything looks normal.

I am sitting in the tiny hospital room in Manhasset, New York, beside my mother, my housekeeper who recently became sick, and two of her ten children.

Merle emigrated from Trinidad a little over a decade ago. When she left Trinidad, she also left 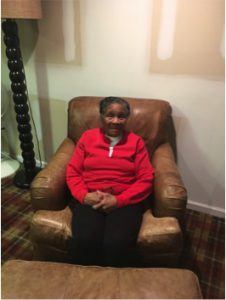 My housekeeper, Merle, in the basement of our home in Long Island, NY.

behind her husband and eight of her ten children, taking two with her to the United States.

Being able to maintain a household of twelve people was not easy, especially when she had a job that barely paid minimum wage. With the need to make more money, Merle fled to New York.

Eight of her children didn’t have a visa to enter the US. And even if they did, Merle needed to work and could not afford to take care of all of them and herself in the states.

She came without a way home. She had a visa to get into the states, but no green card that would allow her to return from Trinidad legally if she tried to see her family.

She didn’t know when or if she would ever be able to return. Merle chose to make sacrifices for the good of her family and extended family.

Merle started working for us when I was six years old. My mother met her when Merle was serving at a party. My mom was looking for a housekeeper and asked the party hostess if she knew of anyone looking for a job. She was in luck.

What started the week after the party as a two-day-a-week stint quickly turned into five, and Merle adopted a bedroom in the basement of our home.

Her two children lived together in an apartment in Brooklyn, an hour drive from our home, until they both made enough money to live on their own. One of them worked as a bartender, the other as a waitress.

The nights my parents worked late, Merle cooked me dinner and sat with me while I watched a movie in the den. When my parents wanted to go to the gym early in the morning during the week, Merle would wake me for school and make me lunch.

Merle never let her cellphone leave her sight. You’d have thought with the amount of times her phone rang in a day that she was the President of the United States or something. As I grew up, though, I realized that the people who were constantly calling Merle were her eight other children back in Trinidad.

It was in the cubical-sized hospital room with stale grey floors and dove walls that I realized how difficult it must’ve been, and must still be, for Merle to have left her family behind.

By now, all of Merle’s children are financially independent. Her absence forced them to get jobs of their own. Some of them have had families of their own. Four of her children got married, some had kids.

She couldn’t be there to see any of it. She lost her husband while she was in New York, and couldn’t go home for his funeral without a green card.

In her hospital bed, she wanted her family together, yet they couldn’t be there. They were not allowed to enter the United States without a visa.

Merle was able to watch me grow up and I was able to be by her side when she dearly wanted loved ones close to her. I feel lucky and haven’t sacrificed a thing for it.