My roommate is desperate. She needs a story about identity and has a day to put together a podcast. That’s why we’re at my grandmother’s apartment in Glenview, making small-talk while she slices apples and plates cheese and crackers.

I know my grandma had a point in her life when she decided to make the switch from rural Newfoundland to the urban cities of the United States. I figure that will spark some good audio clips for my roommate.

“I grew up on a farm,” my grandma says as we take a seat on her couch. “And everyone thought I was going to end up a nun.”

“So what made you choose such a drastically different lifestyle?” my roommate asks. “That must have been a surprise for your family.”

Smiling, my grandma says she wanted freedom. She wanted to move beyond her small Catholic town, travel, fall in love, and have children of her own. While a handful of her sisters chose a marriage to Christ, at age nineteen my grandma packed her bags – left her family and all she knew – and flew to New York, where she enrolled at Grace Downs Air Career School in Manhattan to become a flight attendant.

My grandma tells us of her life in New York, of the cultural diversity she found in food.

“In Newfoundland, we boiled everything. In New York, I had for the first time Italian, Chinese, Indian, French food – it was just unbelievable,” my grandma laughs. “I felt I had died and gone to heaven.”

She describes the rigorous training in flight attendant school. Women from all over the world competed for few spots in what was then a profession marked by prestige and status.

“They were the most beautiful girls I had ever seen. Tall and blonde, they intimated this little redhead,” she laughs and points to herself.

I flash back to my visit at Washington D.C.’s National Air and Space Museum over the summer. On display were the old planes my grandma used to work on. I was struck then by the flight attendant qualification test exhibit. I took the test and failed, as the early mental and physical demands for flight attendants were stricter than modern-day standards adhere to.

With all odds against her, my grandma earned a spot at Delta Air Lines and a better way of life. Back in Newfoundland, she had made $182.50 a month teaching grade-school students, and as a flight attendant she earned $400 weekly.

“What was the best part of your job?” my roommate asks.

“I was transferred to Miami where I flew large jets. The climate there, the beaches, and the hotels were all incredible. It was the best two-and-a-half years of my life. I was able to stretch my wings and become my own person,” my grandma reminisces. “I loved America before I came, and once there I loved it even more.”

“Did you face any challenges?” my roommate asks.

My grandma nods and describes her first encounters with discrimination when working in the south. She says the first time she took a bus she noticed a huge sign that read in italics, “White people seat front to back. Colored people seat back to front.”

“You can imagine the disgust I felt. I was a young, idealistic girl coming from a place where I hadn’t even seen an African American,” my grandma explains.

She tells another story of a shopping trip in Jackson, Mississippi. While she was browsing, two little African American girls ran inside ahead of their mother and tripped. My grandma helped them to their feet, and noticed a clerk glaring at her.

“If looks could kill, I would have been dead,” my grandma says. “It just wasn’t done there, the kindness and the empathy.”

When on the job, my grandma says her co-workers were disdainful toward the African American employees who would refuel the planes or refurbish the meals.

“I was shocked to the core because coming from a small village and Catholic background, I was taught to love my neighbors as I loved myself.”

My grandma says these experiences shaped her future life choices.

“They scared me, but at the same time strengthened my sense of justice,” my grandma says. “I pledged I would never settle down in the south. I didn’t want my children raised in such a toxic atmosphere.” 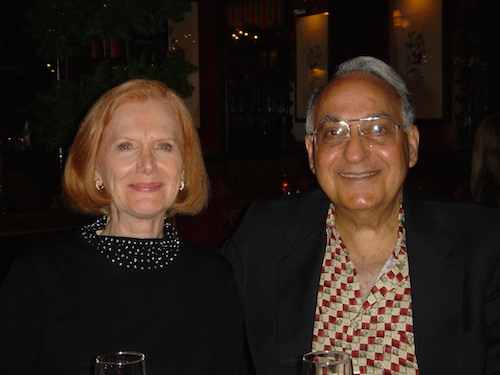 My grandma met my grandfather met on the job. He flew business commuter flights and often saw her on his planes. A few flights of charming my grandma with his humor and kindness led to marriage within the year. My grandpa, a child of Lebanese immigrants, grew up in Detroit, a city that is home to a prosperous Arab community. My grandparents settled there, where my grandma became an American citizen.

“The day I became an American citizen was very special. My husband and his law partner accompanied me to the Detroit courthouse. I was asked a few simple questions by a judge, pledged my allegiance, and then I was a citizen,” my grandma smiles. “I was thrilled because now I could vote, and my vote would try to do some good in the world.”

My roommate emerged with an A-worthy podcast that pinpoints my grandma’s experiences as a flight attendant. It shaped who she is today.

Thanks to my roommate’s desperation, I discovered my grandmother’s coming-of-age story.

Why had I not known that story until then?