I am thirteen. Disillusioned by the world, I text on my flip phone for the drive to Grandma and vovô’s house, up the winding road to their little cottage on Mount Madonna just up the mountain from the northern California coast. The summer of 2010 is all about soccer—every four years is “Em busca de hexa,” searching for the sixth World Cup win by the Brazilian National Team. We always watch the games with my grandparents, and since it’s summer, the two-hour trek up the mountain from Palo Alto is an easily attainable feat.

Clouded by the sense of superiority that infects the middle school mind, I slump into my grandparent’s house, and only start to perk up at the smell of feijoada seeping through the air. My newly-vegetarian older sister peeks at the dish of sweet potatoes that our grandma has made her. I am drawn to the unassuming stew boiling on the stove, my vovô stirring it ever so carefully. He notices me lurking behind him and with a boisterous laugh that he reserves only for me, he greets me with a “Hello!” My vovô’s accent is thick, but to me it means grandfather. It’s warm and safe, and how he rounds his Os and smooths through Rs sounds like comfort.

After a hug, he turns his attention back to the feijoada, a dish he makes usually at my request. Grandma makes all the other food, but when feijoada and rice are on the menu, Vovô is the chef. Filled with linguiça, ham hock, and beans, I know it as the warm taste of home, the connection to my Brazilian roots that I don’t fully understand.

For the first time, I ask.

“Where did you learn to make this?” 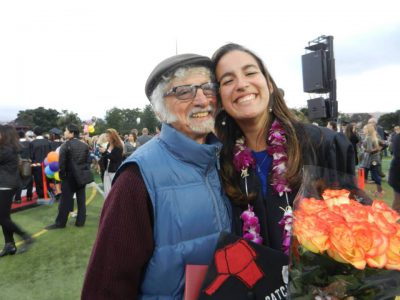 My vovô and me at my high school graduation. (Photo credit: Tanya Mota)

My usually taciturn vovô smiles and begins to tell stories of his past, of him growing up on the streets of Fortaleza in Northeast Brazil, passing soccer balls made of socks. Feijoada, he says, was the peasant’s food until it was adopted by the rest of the country. He talks about his brother and sisters, the huge family that was home for years. In my eyes, my vovô is the most educated person I know, switching from Latin to ancient Greek to English to Portuguese in an instant, saying quips about Aristotle. He is also someone who left his eight brothers and sisters behind in search for something more.

He talks about studying to be a Jesuit priest in Argentina and escaping to Brazil on a boat in the middle of the night when the Argentine government in the 1940s executed a campaign to persecute Catholics. The news crews were waiting for them on the other side, and for the first time I can see my vovô as a young adult, joking with reporters, glazing over the terrors of his life.

He laughs as he weaves in his stories of playing ice hockey in Montreal, seeing snow for the first time in his late 20s. His studies then took him to America and marches with Martin Luther King, Jr., when he was not sure whether to use the colored fountain or the white one. He met my grandmother in Washington, D.C., bringing dates, literally, on their first date. She led him away from the church, away from his family, but together they created the family that I take for granted.

The feijoada is done and he serves it up over a plate of rice–his special rice, made with paprika and easily the most delicious rice I’ve ever tasted–and we return to the dynamic I am used to, me quiet and removed, my grandma and sister ruling conversation. The food holds renewed meaning for me now. With each bite, I feel the struggles of my vovô hoping to keep his culture alive through generations. My awareness of each step he took to reach this spot, in this cabin in the woods in Northern California makes my identity ever stronger.

When I explain my mixed race, I say I’m a quarter Brazilian, but for once, I fully know what that means. We root for the Brazilian soccer team later that night, but all I can think about is vovô playing with his friends in the streets of Fortaleza in bare feet, kicking soccer ball socks.

He gave up his whole family back in Brazil for a better life for his future family, for me and my sister. From following the church to following his love, he fought for that one quarter of me every day. Somehow though, through feijoada, I know I will always remember where he came from.