Why my mother hates hot dogs

I’m warming up a hot dog in a microwave when my mother walks into the kitchen, balks at what I’m doing, and abruptly walks away. “Perhaps she just thinks it’s not healthy,” I think to myself. “Maybe she’s just got something against hot dogs.”

She’s cringed at my hot dog cravings before, though at 13 years old and in the 7th grade, I had only recently eaten my first hot dog. 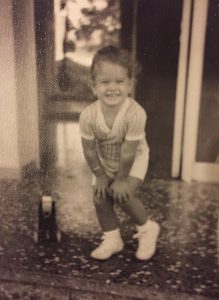 My mother at 5 years old poses for a photo on the steps of her apartment building in Cuba. (Photo Credit: Diana Weir)

I’m a picky eater. When I find a new food I like, everyone around me notices, given that it happens so rarely. My mother knows that and is usually ecstatic when it happens. Not this time. I’m annoyed so I confront her.

As I follow her back into the living room, I expect a lecture on the importance of healthy eating and a well-balanced diet, but as we start talking, the conversation moves in a decidedly different, unexpected direction. She begins talking about how she immigrated to the United States.

She tells me that she came to this country not by choice but out of necessity, seeking refuge from an oppressive dictatorship that at the time had just risen to power in her home nation of Cuba. She arrived in this country with nothing more than the clothes on her body, she recounts. She had only her mother by her side. Her father stayed behind on the island and continued his work as a doctor for another year.

“But what does this have to do with hot dogs?” I ask myself. We had talked about her journey to the United States many times before, but this time she adds something.

She focuses on how often she and her mother moved after they arrived in the US. First, they went to Miami, then to Los Angeles, then back to Miami, all within the first year. They eventually settled in the north, in Elizabeth, New Jersey.

With so much moving, she explains, they had very little money and leisure time. Her mother struggled to hold a job, given that she did not speak English. They shared their small, dirty apartment with the resident roaches, and it was not uncommon for other insects to show up as well. The walls and floors would creak so loudly, she recalls, that it was hard for her to get a full night’s sleep for the first few weeks after they moved into the apartment.

They ate hot dogs regularly. That’s all my mom says her mother knew how to cook. She jokes that they were the absolute cheapest hot dogs available.

Once my grandmother landed a job, she had very little time to prepare anything else, and most of the neighbors were unwilling to even talk to these new outsiders, let alone help them cook.

I remember my mother ending the conversation by declaring that she “hated” hot dogs and asks me to imagine living in a world where hot dogs are all I eat.

That would be amazing, I say, but I start to understand why something that seems so simple and delicious to me might bring her back to a difficult time in her life.

I emerged from the conversation recalling the difficult circumstances in which she grew up but also recognizing the privileges, like choosing to eat a hot dog, I had been afforded growing up.

Being a picky eater requires a certain flexibility with finances and time that many, like my mother, did not have growing up. I can go to restaurants that accommodate my particular food requests. I have two parents who have the time and willingness to seek out food that suits my preferences. We can afford specialty food products.

Small privileges may seem insignificant, but they add up quickly. Both my parents speak the native language now. We all “blend in” with our surroundings. Our neighbors are often willing to help us, even with small things like picking up our mail when we’re out of town.

While my strange obsession with hot dogs has long since passed, every time I see a joyful child enjoying a hot dog, I’m reminded of the conversation with my mother and those tiny privileges, small blessings I am afforded that add up to who I am.