Can President Trump cut off funds, as he has pledged, to places—such as cities, colleges and churches—that have declared themselves to be immigrant sanctuaries?

“It’s rare to have a five to nothing vote around here,” said Lacey Beaty, one of five city councilors in Beaverton, Oregon.

But that is exactly what happened on Jan. 10.

Beaty said that after three weeks of discussion and “overwhelming support from the community,” all five Beaverton City Council members voted to designate Beaverton a sanctuary city.

Oregon is already considered a “sanctuary state” because of a law enacted in 1987 that prohibits state and local police departments from using their resources to enforce federal immigration law.

But Beaty said it was essential for Beaverton to make its own sanctuary city designation clear. 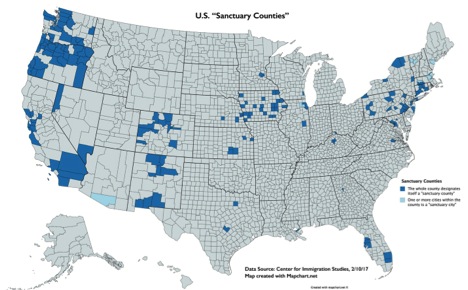 A map of all counties across the U.S. that have designated themselves “sanctuary counties.” The data comes from The Center for Immigration Studies, a conservative non-profit research organization that favors lower immigration numbers.

On Jan. 25—fifteen days after Beaverton declared itself a sanctuary city and joined a growing number of sanctuary cities across the country—President Trump released an executive order vowing to “ensure that [sanctuary] jurisdictions that fail to comply with applicable Federal law do not receive Federal funds, except as mandated by law.” The order also provides that the Secretary of Homeland Security is authorized to decide which cities or states are sanctuary jurisdictions, and that such jurisdictions would not be “eligible to receive Federal grants, except as deemed necessary for law enforcement purposes.”

However, it remains unclear how the president could go about cutting off funds to sanctuary locations.

“I think there are really strong arguments that he cannot,” said Ted Waters, Managing Partner in the Federal Grants practice at Feldesman Tucker Leifer Fidell LLP in Washington D.C.

Waters said there is a fine line between persuasion and coercion, and the federal government cannot use federal funds to “strong-arm” states or cities.

He cited the landmark 2012 Supreme Court case on the Affordable Care Act, National Federation of Independent Business v. Sebelius, as the first and only time in history in which the federal government was found to be using federal grant funds coercively. The majority of justices found that Congress was not using its spending power correctly and was, instead, coercing states to expand Medicaid by threatening to cut off existing funding.

Waters also cited First Amendment concerns and concerns over what is called the Nonprocurement Suspension and Debarment Common Rule.

Waters said that, under suspension and debarment, the federal government cannot simply declare a “unit of government” to be ineligible for funds.

Instead, to debar a local government, it must find that the state or city is not “presently responsible” and cannot be trusted with funds.

“This might be President Trump’s plan, but it seems like a stretch to me,” Waters said. “It’s not like the grants go to the whole city; they go to specific departments.”

Waters said President Trump would have to find the whole city and all of its individual departments to be “not presently responsible” in order to cut off funding.

“If they cut off Head Start funding and cut off funding to little three-year-olds, for example, and say that is related to immigration, that would not make any sense,” Waters said.

But Laurie Robinson, former Assistant Attorney General for the U.S. Department of Justice Office of Justice Programs, sees a potential way President Trump could cut off funds to places that have declared themselves immigrant sanctuaries.

“Within the Justice Department, there are block grants, which go automatically to states and localities, and discretionary grants, which are distributed at the discretion of the executive,” Robinson said. “In the latter category, the administration would have enormous flexibility to deny those funds to sanctuary jurisdictions.”

“I don’t know if the current administration has thought this through,” Robinson said. “The Justice Department gives out a lot of grant money to do research, but does that mean research funding gets cut off because of immigration matters?”

Christopher Broderick, the Associate Vice President of University Communications at Portland State University, a self-designated “sanctuary university,” said he does not see this happening.

“[Cutting off federal funding to research universities] would require an act of Congress because there are hundreds of millions of dollars of federal funds that go to universities across the nation for research, student financial aid and other sources,” Broderick said.

Broderick said Portland State University will continue to support its Deferred Action for Childhood Arrivals (DACA) students and will ensure that its campus safety officers “will not act as immigration officers in enforcing federal immigration law.”

Meanwhile, Beaty has already begun preparing for what would happen if Beaverton lost its $1.6 million in federal funding.

“Federal funding is less than one percent of our budget, and a lot of the funding centers around the Environmental Protection Agency and women’s rights, which are things President Trump would have cut anyway,” Beaty said. “But we would still have to get a little creative with the budget.”

However, Beaty said she is willing to risk losing federal funds because she knows she is doing the right thing.

“Less than one percent of our funding is no reason to turn our backs on our community,” Beaty said.

Alderwoman Diane Marlin of Urbana, Illinois, a sanctuary city more than 2,000 miles from Beaverton, believes it would be hard for President Trump to crack down on sanctuary cities like her own.

“If he punishes us, he’s gonna wind up punishing just about every city in America,” said Marlin. “Most cities are doing what we are doing.”

Still, Marlin, who is also running for mayor of Urbana, worries that the city will lose federal housing, transportation and infrastructure grants to fund some of the long term projects of redeveloping rundown parts of the city.

“There’s just so much uncertainty,” Marlin said, and added that she believes the uncertainty is just President Trump’s way of scaring sanctuary cities.

Even if it would be difficult for President Trump to cut off federal funding to self-designated immigrant sanctuaries, there is new uncertainty as to whether or not state lawmakers could cut off state funding to sanctuary cities.

Republican lawmakers in states across the country are brainstorming ways to compel their cities and towns to adhere to federal immigration law.

The National Conference of State Legislatures said on its website, “At least 29 states and the District of Columbia are considering legislation in 2017 regarding sanctuary jurisdictions or noncompliance with immigration detainers.”

How effective this body of legislation would be remains unclear.