Why do so many Mexican immigrants come to the United States?

After being deported for being an undocumented Mexican immigrant, Elvira Arellano has returned and is seeking asylum in Chicago for herself and her US-born son. Why did she come to the United States in the first place, and then return after being turned away? Like many other Mexican immigrants, not necessarily for the American dream.

The “American dream” is an ethos steeped in American lore that became popularized in the 1930s. It is the bedrock belief that one can achieve success through hard work and initiative with the economic opportunities provided here.

Since Mexican immigrants make up a large portion of the US’s immigrant population, it is assumed that the American dream is the driver of the influx, regardless of immigration laws and policy. In 2015, about 11.6 million immigrants from Mexico resided in the US, accounting for more than 1/4 of all US immigrants, according to American Community Survey (ACS) data. Although attaining the American dream is the reason many come to the United States, it is not the only one.

There are various pull and push factors that determine why a Mexican citizen would choose to come to the United States. Some pull factors that make the US appealing include access to better healthcare and quality education, large existing communities of Mexican immigrants, family reunification, and more job opportunities. These factors are correlated with the economic benefits of the American dream. Some push factors that compel a Mexican citizen to leave his or her home country include high crime rates, drug trafficking, unemployment, poverty, and climate hazards that lead to water shortages.

What is seldom expressed in the polarized and inflammatory political discourse is that US policies have contributed to some of the reasons Mexicans feel forced to leave their native country and opt to live in the US. In seeking asylum, Arellano cites these factors, along with her fears of returning to Mexico where she says her political activism has put her at risk. As she awaits her asylum hearing, her concerns about being deported again have been stoked by the Trump administration’s avowed commitment to step up enforcement and target a larger pool of immigrants for removal, according to a Chicago Tribune story, “Immigration activist Arellano faces ICE check-in, worries about deportation.”

Arellano points to the North American Free Trade Agreement (NAFTA), the agreement that President Trump has called the “worst trade deal in history” and pledged to end it or renegotiate it, as affecting the agriculture of her country and her family’s land. NAFTA displaced more than five million agricultural workers from the land that they had lived for years, according to Walter Coleman, a pastor of the church where Arellano was given sanctuary for a year in the 1980s. In Mexico, Arellano’s father lost his ability to grow corn on his land. When the family land was passed down to Arellano, she did not have the resources to maintain it and ended up losing her job because of the devaluation of the peso, which as she says, was caused by US banks. 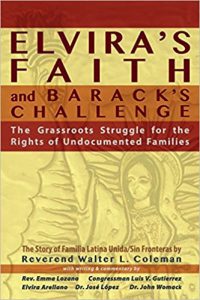 “We didn’t come to this country looking for the American dream,” Arellano says, translated from Spanish. “We left our country because of the politics of [the United States] and how it affected our well-being.”

Her son Saul, then only four years old, was with her when she got arrested and deported in 2002. He was born in the United States but moved back shortly after his mom was deported. He went back to a land his mother called home but in which he felt like a stranger. It was difficult for him to transition from one language to another, let alone one country to another. After coming back to the United States, Saul is settled and accustomed to his life. Although he does not call Mexico his true home, he remembers and appreciates the sacrifices his mom made for him by coming to the United States and giving birth to him here.

As with Arellano’s second immigration to the United States after being deported, many Mexican immigrants come to the US so that they can provide a better future for their children, even if they themselves would have rather stayed in Mexico. In this case, both push and pull factors matter, with more emphasis on economic opportunities for the children of Mexican immigrants – the second generation. 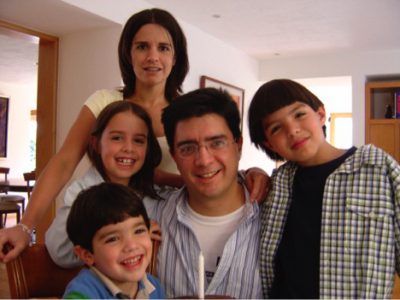 Mariana (middle left) and her family when they lived in Mexico City.

This is the case for Mariana Berruecos’s parents. She immigrated to Miami with her parents and two brothers in 2008 from Argentina, where she lived for two years after leaving Mexico in 2006. The reason her family left Mexico, she says, was because her father got a job offer in Argentina with more benefits than his previous one. After two years there, he got another job offer in Miami, which he immediately took, thinking it would be for a short period of time. The family has lived there since, and each has become an American citizen. For the past two years, however, her father has been working in Mexico City on the weekdays and going back to Miami to be with his family on weekends. Because their extended family lives in Mexico, Mariana’s father lives at his parents’ house when he is there.

Although her parents are content in the United States because living here has provided the children with educational opportunities they never would have had in Mexico, it is also difficult for them to be apart from their families, and from their children in college. Mariana’s older brother attends the University of Pennsylvania, very far from where the rest of his family is, which is unusual in Latin American countries because children tend to go to school in the same city as their parents. Mariana’s mom makes do. Mariana says her parents would have liked to stay in Mexico with their families but that the United States was a better choice for their children. Mariana’s generation has a better opportunity to attain the American dream because they have lived in the US longer than their parents and did not have to make the difficult choice of moving out of their native country.

“I feel like it would be hard to go back [to Mexico] because I’m already used to it here,” Mariana says.

Rita Perez, a UCLA student from Mexico, is in a similar situation. Her father was born in Mexico and moved to the United States by himself when he was 19. After marrying here and getting divorced, he moved back to be with his family and met Rita’s mother in Guadalajara. When her mother got pregnant, Rita’s father convinced her to move back to Los Angeles with him. Rita was born right before they moved. She came into the 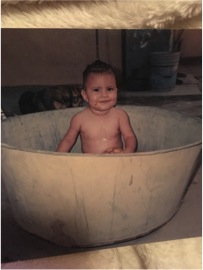 Rita in Guadalajara, before moving to LA.

United States undocumented and has since become a permanent resident with her mom. Back in Guadalajara, her father was a firefighter and professional soccer player. Like Elvira Arellano, Rita’s family owned land in Mexico but was having trouble maintaining it and making money from it.

life,” Rita says about her father.

He now works at a construction company in LA to support Rita and her brother. Rita says that after she and her brother are able to live on their own and graduate college, her parents would like to move back to Guadalajara to be reunited with their families. Nonetheless, Rita’s family voluntarily came to the United States in the first place for the economic opportunities to attain the American dream.

Another reason for immigrating to the United States is to flee a home country where someone is subjected to persecution and imminent danger. In this case, the immigrant can seek asylum in the United States, and during the process is safe from being deported.

However, not a large number of asylum cases get approved from Mexico. In 2015, the total number of Mexican citizens who were granted asylum in the United States was 667, according to the Department of Homeland Security. In removal proceedings, only 203 out of 8926 applications for asylum from Mexico were approved by immigration judges in 2015.

There is a difference between fleeing a home country due to forced economic reasons like poverty and unemployment and fleeing because of fear for one’s life and security with no help from the government. Although Arellano in her words had no choice but to come to the United States initially because she could no longer support her family, it is unlikely that she will be able to attain asylee status. Successful asylum cases from Mexico are rare. The types of applications that get approved for asylee status involve public figures who have received death threats and whose family members have been murdered or assaulted, victims of domestic violence who have sought help from law enforcement multiple times and been ignored, or people who have been persecuted and dealt with violence from drug cartels and drug traffickers based on their social group or political opinions.

Whether the factors are pull or push or a combination, Mexican families migrate to the United States to provide better futures for their children, even if the parents would have rather stayed in their native land. This differentiates first generation from second generation immigrants, because

Second generation immigrants have a better chance of attaining the American dream once they’ve lived in the United States for longer, even though their parents may not have initially come for that reason. If they are given the chance.