A haircut, some chocolate, a cup of coffee, but hold the hate

Marian cuts a few sections of my rough, brown hair, gathers her hand towel and wipes some hair clippings off my face. We are sitting in Edessa’s Hair Salon, a rectangular-shaped, cozy salon near the corner of Chicago Avenue and Davis Street in downtown Evanston. I’m sitting in the first of three black, leather chairs, my usual seat, with a black covering over my torso to keep hair off of my clothes.

Marian, my stylist, stands behind me as we chat, making eye contact through the square mirror in front of me. At 5-foot-8, I don’t tower over people, but Marian is an exception. She stands about a half-foot below me, with olive-colored skin and puffy, jet black hair. Usually, we make small talk—school, vacations, family and, to my delight, my dog. But today, on Jan. 24, 2017, only four days after inauguration day, we talk with a markedly different tone.

“Don’t hate,” she says, looking at me with a stern facial expression, eyes pointed directly at the reflection of my eyes in the mirror.

I have just lambasted President Trump, proclaiming my “hate” for him. Trump is still a few days away from signing an Executive Order that restricted travel to the United States for citizens of seven Muslim-majority countries, including Iraq. Marian, who has owned Edessa’s Hair Salon since 2011, emigrated from Iraq to the United States almost 40 years ago after a short stint in Italy. Marian and her family weren’t persecuted in Iraq, but they sought a more fulfilling life elsewhere.

She, her husband and her sister, also a stylist at Edessa’s, have lived in the Evanston area for most of their time in America. While many of her family members still live in Iraq, Marian has not been back. She gives no particular reason why.

Discussing Trump’s presidency with her, Marian remains consistently composed. She doesn’t like Trump. She makes no effort to hide her many disagreements with him, but hate, according to Marian, is unproductive. She tells me not to hate—to disagree, but not to hate. She asserts her firm belief in respecting everyone.

Since early in my freshman year, I have been going to Edessa’s on a near-monthly basis for haircuts. I live nearby, in Highland Park, but decided to seek out an Evanston-based hair stylist for college. From our first encounter, Marian’s generosity struck a chord with me. She regularly showers me with goodies—fresh cups of coffee, Oreos, mints, chocolates and water bottles—before, during and after my haircuts. 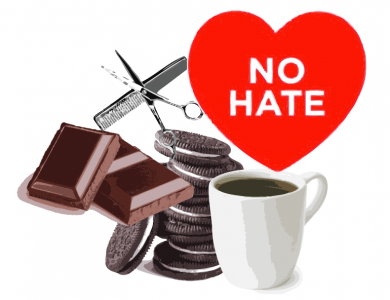 During my first appointment with her in September 2016, one of the first things Marian notified me of was her affinity for eyebrow waxings. It’s an Iraqi specialty, she told me. She firmly ordered me to tell my girlfriend. Marian still proudly carries Iraqi traditions, though she has lived in her new home for nearly four decades.

She misses the food. Local Mediterranean restaurants like Olive Mediterranean Grill and Naf Naf Grill don’t cut it for her. She says she often craves the spices, the recipes and the sweet smells of her native cuisine. Marian often longs for her home country—her customs, her food, her family—but raves of her markedly improved life in America. She is happy here. She is at peace. And for her, part of that is accepting and loving—not expressing an emotion as strong as hate.

Even with a president, who had called for a “total and complete shutdown” of Muslim entry into the United States, in office, Marian, a Muslim, preaches acceptance and respect.

It’s part of who she is, she tells me. It’s ingrained in her persona. It’s part of how she carried herself in Iraq. She has proudly brought with her to America.

Don’t hate, she says. And don’t forget your coffee.