My grandmother hands me a packet of seaweed lavers, short grain rice, and pickled daikon radish. In her broken English, she instructs me to prepare rolls of gimbap while she finishes frying the marinated beef and egg.

“We give to priest,” she says. And to everyone else we know, she doesn’t say.

I rub my hands in a mixture of vinegar and sugar to make sure the rice doesn’t stick to my fingers. I have a bad habit of making the rolls too fat. My grandmother laughs at me and tells me my gimbap looks ugly. Unlike their Japanese counterparts, Korean sushi rolls are stuffed with everything you can possibly fit in them. My grandmother’s recipe consists of at least six different fillings, making for a healthy balance of protein and vegetables. She always includes an excess amount of ingredients, and I take it upon myself to stuff as much as I possibly can in each roll.

As I start, I don’t know that I’m about to knead rice for the next three hours. What I think of as a pleasant afternoon for a 17 year old making a few rolls of sushi turns out to be my grandmother’s session of life lessons before I start applying for college. 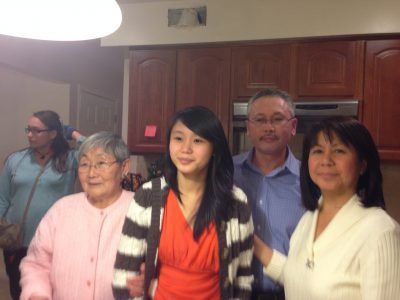 My grandmother, father, mother and me, with my cousin in the background on my 17th birthday. (Photo credit: Arthur Cabales)

Before that day, I had already known that my grandmother’s story was complicated. Growing up in Seoul as a half-Japanese girl had set her apart from everyone else. She pushed herself to cope with feeling like an outsider in a culture that silently pressed for homogeneity. Being born outside of the status quo prevented her from participating in any form of conformity. As a result, she found strength within herself to decide what would be best for her.

Previously, my grandmother had told me that her mother, a Korean nurse, had eloped with a Japanese soldier around the time of World War II. After he left her for a Japanese woman, she was incapable of taking care of her two young children. The sisters were then separated, and my grandmother was adopted into a pure-blood Korean family.

Now, my grandmother adds a new surprise to her story. She claims that her adopted family originally lived in North Korea, residing outside of Pyongyang, where they were prosperous and wealthy.

However, she says that her childhood was disrupted when she was about 10 years old. Leaving everything behind, she and her family were forced to migrate to Seoul around the time of the Korean War.

My grandmother’s spoken account of the story is difficult to understand, and she pauses now and then to wipe away tears in her eyes. I know her as a strong and bossy woman; she is usually the first person to scold you for complaining or doing something incorrectly. The old woman under five feet tall had a fiery temper that my father takes every precaution to avoid. I’m not used to seeing her cry or coming close to anything so emotional. I take extra care to listen to what she tells me, asking extra questions as she struggles with English, her fourth language.

From what I understand, crossing the border into South Korea was an arduous ordeal. She had to cross some sort of bridge to enter her new Korea, and she was ravenously hungry throughout the process. Although she was traveling with her adoptive father, she was young and terrified. She was finally relieved to be united with the rest of her adoptive family after successfully crossing the border.

Her family’s struggles had just begun. Eventually settling down in Seoul, her family started over as immigrants. They were no longer in the Korea they were familiar with. My grandmother told me how she worked to change the way she spoke, replacing her North Korean dialect with a South Korean one to fit in. Her adoptive mother complained that the mannerisms of South Korean women were dainty in comparison to the family’s. She teased them for their soft and cute way of speaking.

Although my grandmother’s parents freely teased their new neighbors in the privacy of their own home, they were painfully aware that they were outsiders within their new country. They faced the stigma of being North Korean defectors, and it was no mystery that their neighbors harbored feelings of animosity against their homeland.

From listening to her story, I come to understand more of my own identity as a first-generation Asian-American. Growing up in a predominantly white community in northern New Jersey, I struggled to come to terms with the ways I was different from many of my peers. I blushed whenever a classmate told me that my lunch looked weird or that my eyes were unusually small.

Conscious that my white friends could always find something foreign about me, I tried to fit in with the Asian community my parents had naturally partook in. However, I kept stumbling on the few Asian phrases I knew. The foreign words rolled off my tongue awkwardly, and I was teased for “sounding too white.” I felt like an outsider in both communities, and my grandmother could sense my loneliness when I was a child.

As I listen to my grandmother speak out about her difficult experiences in South Korea, I smile and watch her carefully handle the fresh rolls of gimbap that she taught me to make. She finds a way to connect to her culture through food, even in her cramped kitchen in Jersey City.

She makes her point clear without explicitly saying it, and she inspires me to establish a unique sense of individuality. In our respective worlds where we identify with conflicting cultures, we strive to find ways to accept them as unique parts of who we are. Rather than hiding away and blushing when we clearly see our differences, we recognize that these encounters affirm the value of our unique experiences.